Comedy
In Theatres
On the Festival Circuit

(Harmony and Me is screening at MoMA through Thursday, September 24, 2009. Visit the film’s official website to learn more.)

(Editor’s note: This might very well be our first ever flat-out non-review of a review, but it actually speaks quite well to a dilemma that we have been pondering for quite some time. We are very thankful that Mr. Lowery has brought his sincerity and intelligence to this topic so we are proudly posting his ruminations here.)

When my faithful editor wrote me a few days ago to see if I might write a review of Bob Byington’s new film Harmony and Me to coincide with its release this week, I immediately declined. My reasoning in this choice can be traced to a second request, one from Mr. Byington himself, who on the red carpet outside of the film’s Los Angeles premiere a few months ago asked that I try not to judge his aesthetic choices too harshly (I recall that there was one shot in particular, involving a piano, that he was especially apologetic about). I don’t think he was worried about me writing a review; he was asking me to go easy as a friend.

He needn’t have worried. To be sure, Harmony And Me is a sloppy movie, so aesthetically apathetic that its visual carelessness begins to feel like its own laconic joke, but here’s the thing: as a filmmaker, sloppiness appeals to me. As a critic, the motivation that might lead a filmmaker to deal in sloppiness fascinates me. As a friend, I’m just happy to see my peers and confidantes get their work out into the world, sloppy or otherwise. I could write a good piece of criticism about Bob’s film, but in doing so I would have to ignore the fact that I know Bob. Or that Frank Ross, the editor, is one of my best friends, from whom I heard no shortage of stories about the nightmare that was post production, and that the amazing actress Margie Beegle is the mother of another good friend. I shot a film of my own in one of the locations used here. I’ve worked with Justin Rice on several projects, including one where he dressed in some of the same wardrobe (his own) that he wears in this film. None of these associations disable my ability to think critically about the film; they simply disable my desire to. I liked it, I laughed. Can’t I leave it at that? 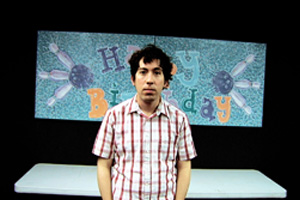 This, then, would seem to be the basis of my declination, and yet here I am anyway, writing about not wanting to write about a friend’s work, and wondering where one draws the line. As a friend, do I owe it to Bob—in exchange for his having made a film—to give that film a strong piece of consideration? Or as a critic, do I owe it to my friends not to watch their work? Which isn’t to say that Bob couldn’t take or wouldn’t appreciate a serious review: whatever I might write would at the very least be a good and honest piece of criticism, and I don’t know any filmmaker who doesn’t appreciate that. Indeed, I’d thrill to see anyone, friend or foe, write about my work with some degree of incisiveness! My artistic ego will always take a dissertation in my work by my brother-in-law over a capsule from a stranger, charges of nepotism be damned. But now I see I’ve mentioned my ego, and suddenly this particular bride has been stripped bare.

To wit: I don’t honestly care what Bob thinks about what I might write about his film, because I’m confident that what I might write is good. It’s good because my integrity as a critical thinker demands that it be. But my ego shudders at the thought that its silver-plated armor, that self- same integrity, might be left dissolute by association. Manohla has the right approach; no one even knows what she looks like! By comparison, how could anyone ever take anything about Pauline Kael seriously, aside from her general love of cinema and all that it entails? As for me, my own love cinema begat a passion of filmmaking, which in turn begat this tricky inclination towards criticism. Critics can of course be filmmakers, as history has proven, but something of a facade is erected when a director writes about his immediate peers; the kid gloves either stay on, or they come off and take the skin right with them. I want people to take what I write seriously. I want people to take me seriously. And were I to read a review by me, knowing what I know about the film in question, I’d take it, and me, with a grain of salt (while surely admitting that, at the very least, it was certainly a most enjoyable read).

It’s that same ego, of course, which prevents me from bidding a grand farewell to criticism, and it’s working hand in hand with a true love of the form. I’ve no intention to stop. I’ve written about friends’ films before. This entire journalistic endeavor to which you’ve so graciously devoted your time this morning is run by filmmakers: incest is inevitable. But, in accordance to the social mores of our time, I do intend to draw the line, when appropriate, so as to not be prompted to expunge such a distended paroxysm of critical guilt as you’ve just trogged through, and which, I realize now, is probably doing an even greater disservice to Bob and his film than any bad review might. There’s the title of his movie, up there above, and below it? Nothing but navel-gazing. I’ve read reviews of Harmony And Me that would suggest he’s getting a taste of his own medicine. I don’t agree with those reviews, and I’ll leave it at that.