at Amazon. Visit the film’s official website to learn more.)

Ramin Bahrani’s first two features, Man Push Cart and Chop Shop, were Neo-Realist inspired dramas that established Bahrani’s overarching mission as a filmmaker: to drag typically marginalized characters—cinematically, economically, culturally, and otherwise—out of the background and into the spotlight. The critical reaction to both films, in the United States and beyond, spoke volumes. Clearly, Bahrani was doing something right. Still, his commitment to shooting in unfamiliar milieus with unrecognizable faces pretty much guaranteed mainstream success would be harder to come by. Yet with his third effort, Goodbye Solo, it feels as if his time has finally come. Though Bahrani is working within the same budgetary constraints and has once again avoided populating his film with big names and familiar faces, he tells this story with such profound simplicity and graceful humanity—not to mention tender, uplifting humor—that it would be a genuine surprise (and disappointment) if Goodbye Solo didn’t introduce him to a much wider audience. This is a very special film.

In his first two efforts, Bahrani represented the loneliness of midtown Manhattan (Man Push Cart) and frenetic energy of Queens’ Iron Triangle (Man Push Cart) with such startling authenticity one would have incorrectly assumed he was a lifelong New Yorker. The truth is that he was actually raised in Winston-Salem, North Carolina, where he has returned to tell Goodbye Solo’s bittersweet tale. The film opens abruptly, as a Senegalese cab driver, Solo (a perfectly cast Souleymane Sy Savane), laughs at the proposition presented to him by his curt and wizened old fare, William (longtime character actor Red West who, in his first leading role, is an utter revelation). In two weeks, William wants Solo to drive him two hours away to Blowing Rock, a gorgeous mountaintop vista in the northwest corner of the state, but he doesn’t want Solo to drive him back. He’s willing to pay him one thousand dollars in cash for his efforts. Solo’s laughs quickly subside when he understands William’s true purpose in venturing out to Blowing Rock: he’s going to jump. 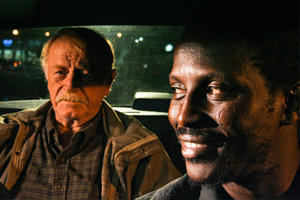 Here is where I must confess that when I heard the description of Goodbye Solo after it world premiered and went on to win the FIPRESCI prize at the 2008 Venice Film Festival, I thought Bahrani was showing extreme brazenness in ripping off Abbas Kiarostami’s Taste of Cherry. But then I watched the actual film and those worries were put to rest in the film’s very first shot, a two-and-a-half minute one-take in which all of the above action takes place. It’s as if Bahrani sensed our trepidation and wanted to put our minds at ease by getting it out of the way from the outset. Yet by establishing the film’s stakes so matter-of-factly and so quickly, it’s as if he’s also saying, “Listen, I know you guys already know what this movie is about, so let’s just establish it for the few who don’t and get on with the actual story I’m here to tell.”

By the second scene, all thoughts of Kiarostami are gone. What remains are the lives of these two men, one devoid of hope and one defiantly optimistic. As Solo pesters William with lighthearted jabs and a comically relentless one-way conversation, some viewers may question how these two characters could find themselves becoming so intertwined. First of all, would William really put up with this stranger’s constant nagging? And secondly, why does Solo express so much interest in this man? To me, the answers to these questions are painfully clear: one, deep down William is still yearning to make a connection; and two, by being aware of William’s intentions, Solo has no other choice but to try to save him. To wonder why Solo would be so persistent is to admit to one’s own shameful inhumanity.

A third character factors into this equation: Alex, Solo’s young Mexican-American stepdaughter. Throughout the film, Solo and William and Alex interact with one another, but it isn’t until the film’s pre-climax, in which the trio arrives at Blowing Rock and ascends the pathway that might or might not lead to William’s death, that Goodbye Solo begins to fully soar. Here, colors and ages unite: black, white, brown; elderly, prime, young. Without talking down to us, without hitting us over the head, through simplicity and clarity, Bahrani and his co-writer Bahereh Azimi have produced both a literal and symbolic representation of the New America in which we live.

I watched Goodbye Solo projected on a 35mm print, but if you had asked me, I would have bet everything I own that it had been shot on film. This is due to the extraordinary gift of Bahrani’s closest creative collaborator, Michael Simmonds. Whether shooting narratives or documentaries (The Order of Myths), Simmonds brings a rich, celluloid-like credibility to his images that most low-budget, digitally photographed films lack. As far as the camera work itself, Simmonds and Bahrani wisely stay out of the way—though, at the same time, it’s apparent how much care and thought was put into every single set-up. As exceptionally executed as both Man Push Cart and Chop Shop were, I always sensed a directorial presence hovering nearby. But in Goodbye Solo, that presence has all but disappeared. All that remains is the story unfolding on screen, the faces within the frame. It is filmmaking of the most mature order.

Goodbye Solo marks the graduation of Ramin Bahrani from one of American independent cinema’s most accomplished voices to one of the most accomplished voices in American cinema, period. In a time of universal concern and worry, Bahrani has given us a character that confronts his troubles head on and rebukes his sorrows with a smile. It’s a lesson we all need to learn. Especially now.