(Carson Mell’s previous work, including The Writer and Chonto, is available on YouTube. Field Notes From Dimension X was selected for inclusion on Wholphin No. 7. More information on Mell’s work can be found at his website, www.carsonmell.com.)

Neuroses endear themselves to genre; the format provides a slew of metaphoric hooks on which to hang one’s troubles, back alley brick walls on which to project one’s fears, dirty sheets and barren wastelands upon which to expend the seed of one’s frustration. Genre provides safe distance to vent, to delve, to shake one’s literary fist without having to stand up to those convictions. They are there if the audience wants to see them; otherwise, they make for a good, or perhaps merely passable, bit of yarn. 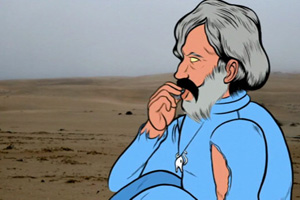 This is the perspective from which Carson Mell’s Field Notes From Dimension X has been conceived. The four-minute short film, which played at Sundance this past January, is less a science fiction tale than an outline of what science fiction can facilitate; this is pulp-writing as confessional. The deep loneliness of the narration, the sexual frustration, the self-loathing, all told with simple, eloquent prose—Mell’s film seems like something of the condensed version of a great short story Philip K. Dick never wrote. When the narrator speaks of masturbating against alien sunsets, closing his eyes and imagining the smell of women as “sad nudity blooms in the dark,” the context vanishes and all we’re listening to is a bitter man, upset by life but with just enough perspective to find some degree of poetry in it (it’s almost too easy to overlook the title card, which displays not an astronaut but a man with a bottle tipped to his lips).

What’s particularly fascinating is that this authorial voice belongs not to Mell—at least not directly—but to another of his creations. This is an extension of The Writer, one of Mell’s previous shorts, in which fictional pulp writer Lucas Reed waxes with gutter eloquence about the autobiographical extent of his work. “You can bet your goddamn bottom dollar,” he says, “that any time some space dude’s off on some stupid intergalactic star center getting tortured, I’m off in a hotel room, the wind’s blowing outside and some bitch has broken my heart.” Mell pokes a little bit of fun at this author’s perceived profundity, but doesn’t undercut what he has to say; likewise, Field Notes From Dimension X is played straightforward and sober, in spite of its grade-B setting, and in its naked metaphor Mell has written something that works both on its own terms and as commentary on that which it represents.

Mell writes with the clipped succinctness of a great short fiction author—he knows his work need not extend beyond itself. And indeed, he is a terrific writer; he’s had work published in McSweeney’s, and Chonto, another masterful short film, has recently been expanded into a novel. His films would almost work as radio plays, as bizarro episodes of This American Life, if they weren’t so beautifully tied to their visuals. Field Notes From Dimension X, like all of Mell’s other short work, is animated, with brush and ink illustrations set against photographic backgrounds. It’s disarmingly simple; it almost seems crude at first glance, until the ebb and flow of the imagery falls into line with the storytelling. There’s a little bit of Chuck Burns to his style, maybe a little bit of R. Crumb; but this is a film, not a comic book, and as such all comparisons fall aside. This is a beautifully original piece of work.