(Expired is now available on DVD

Nobody likes a tattletale. From the moment we begin to understand language, through our working and adult lives and well into our final days, the idea that one of our peers would seek to document our mistakes and make us pay some arbitrary consequence is completely exasperating, an experience that can drive us to invent wild fantasies of terrible vengeance and improvise curses whispered under our angry breath. And so, while we can somehow reconcile ourselves to great tragedy or the random destruction of a natural disaster, it is the pettiest of indignities that can cause the greatest suffering. Sitting atop the pantheon of punitive adults are those brave men and women who trade in daily ignominy by doling out parking tickets. It’s true; nobody loves a meter maid.

Funnily enough, the universal distaste for parking enforcement officers provides just the right emotional distance for Cecelia Miniucchi’s heartbreakingly bleak romantic comedy Expired. Claire (the consistently excellent Samantha Morton) spends her days on the mean streets of Santa Monica, where a patient smile eternally rests on her face as she writes parking tickets for an array of furious, overly-aggressive motorists. But Claire’s nights are rather lonely; in between one-way conversations with her invalid mother (Teri Garr) and bland meals, Claire generally trades blank stares with the unflinching walls of her shared apartment. The universe has not been kind to Claire, but she doesn’t seem to mind very much until she catches the eye of a co-worker named Jay (Jason Patric), a douche-bag of such magnitude that the theater nearly shakes when he appears on the screen.

This isn’t the first time either of these performers have played these characters; Imagine Morton’s Hattie from Woody Allen’s Sweet And Lowdown falling in love with Patric’s Cary from Neil LaBute’s Your Friends And Neighbors and you have an inkling of the chemically mismatched explosions that these two characters generate on-screen. Thankfully, Miniucchi’s direction allows both of them plenty of room to roam, with Jay’s distant, never-satisfied looks into the empty distance matched in intensity by Claire pleading, empathetic eyes constantly searching for a moment of happiness. What Expired understands intimately is the similarity between these two expressions of personal dissatisfaction, how two people, seemingly impossibly mismatched, can travel in opposite directions and arrive, essentially, in the same exact unhappy place. 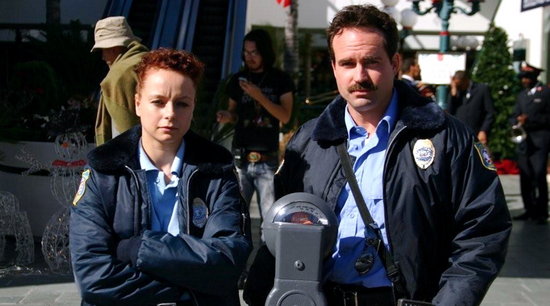 It should be no surprise that Miniucchi, a female filmmaker, would be able to nail male misogyny so perfectly, but without Samantha Morton’s infinitely patient performance as Claire, the role of Jay might be just another caricature. Instead, Claire’s need to be loved (and, more tellingly, to love the deeply wounded Jay) provides a precariously balanced form of self-loathing that brings out the humanity in both characters. It would have been a shame if Miniucchi had drawn bold, winking underlines beneath this relationship, if there had been a single flinch in the entire production’s commitment to the reality of the emotional battle between the characters. Thankfully and rather miraculously, Expired comes to feel balanced on a razor’s edge, walking the bloody tightrope of aching, breaking hearts without a moment of condescension; this is a movie that hovers at the precipice of “over-the-top” without falling off the cliff. This tension (how far will they go?!?) works because of Miniucchi’s restraint and the refusal of anyone involved to pander or make fun of the characters. It would have been easy to make a film about a sweetheart in love with an asshole, but what hasn’t been said there? Refreshingly, Expired shows us love at its worst without ever saying sorry. As the summer marches on and the drumbeat of the infinite superhero franchises marching past our windows seemingly every week becomes exhausting, Expired feels like an ice-cold blast of adult misery delivered with a smile, a welcome reminder that great movies know no season.