A fast paced, HD-hard noir that leaps headlong into a maze of genre moves, Paul Krik’s post-9/11 paranoiac narrative Able Danger is named for the classified military planning effort that was charged with developing operational procedure against transnational (read Islamic) terrorists. In a cruelly ironic twist of fate, the small group of elite military personnel involved with the program were accused after Bush’s midterm reelection of identifying Mohammad Atta and his terrorist cell before 9/11 and doing nothing to stop them by Representative Curt Weldon, a Pennsylvania Republican, only to be ordered not to testify in front of Senate Judiciary Committee chairman and fellow keystone stater Arlen Specter’s hearing about the facts surrounding Atta and Able Danger by the Department of Defense. Getting skeptical yet?

In Krik’s resourceful if didactic movie, shot in a high contrast black-and-white that milks maximum atmospheric effect out of its wide, busy compositions and chiaroscuro lighting, Adam Nee plays Thomas Flynn, skinny and nebbish, a lefty bookstore owner and author of 9/11 conspiracy books. One of these books leads him into a situation of increasingly deadly intrigue involving a mysterious Eastern-European woman named Kasia (Elina Lowensohn), who comes to his store one day claiming to have information verifying Mohammad Atta’s involvement with the US Government. After she waltzes into his Brooklyn bookstore Vox Pop and claims to have answers to his many questions, they set off together on a trip down the noir paradigm of secrets and lies, betrayals and cover ups. 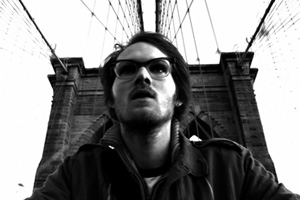 As people associated with Kasia and her brief interlude in Atta’s Venice, Florida flight training circle begin turning up dead, Flynn begins to trust and protect Kasia. He is soon harassed, followed, questioned and mugged by unsavory and technologically advanced boogeymen. Not long after that, his own friends begin turning up dead and he’s accused of the murder of his roommate and fellow skeptic Mikey, at which point he’s promptly chased around Brooklyn by police, government operatives, German madmen and elliptical women, all of whom seek a hard drive Kasia and he have hidden with proof of Atta’s patsy status. Flynn, despite his Brooklyn hipster exterior, proves to be a resilient protagonist, although one is never in doubt that he’ll be unable to survive his findings.

The cynicism this movie taps into is as old as Watergate and as new as Sarah Palin, but so too are the stylistic influences Kirk draws on to fashion this rather straightforward conspiracy tale. While he’s primarily drawing on the the aesthetic qualities of post-war B-cinema, he also owes a significant debt to the Darren Aronofsky of Pi here, with his harsh, low-budget black-and-white New York being traversed by an increasingly unhinged, physically threatened outlaw intellectual (although Krik’s film is more stylistically restless and ideologically engaged in its particular moment than Aronofsky’s). Able Danger bursts with wild flourishes of montage, unsubtle musical cues that verge on camp and a visual style that oscillates often violently between noir influences. The Conversation-esque long lens surveillance camera footage and apocalyptic CGI images are but a projection of Flynn’s grandiose self-importance and his all too real dreams of imminent destruction, both personal and societal. Krik’s thriller is clearly a product of our unsettled age.