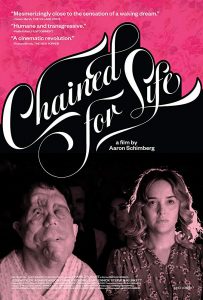 (After premiering earlier this year at BAMCinemafest, Chained for Life plays tonight for the first time in 35MM at Alamo Drafthouse Brooklyn. Review by Sammy Levine.)

Aaron Schimberg’s Chained for Life (his follow up to Go Down Death) is a fuzzy, occasionally spooky, and hallucinatory head trip of a film. Depicting the tale of a cast and crew in the process of making an eccentric German director’s passion picture, it draws from a variety of genres (body horror, forbidden romance, humanistic comedy, and existential meta-film) while never quite fully committing to one. This amorphous and specter-like quality adds to the film’s trippy-ness, eeriness, and shapelessness. Schimberg’s film tap-dances on a tightrope, tying the experience of a fleeting memory to an unshakeable fever dream. Its lucid and free-flowing structure (comprised of seemingly interchangeable vignette-like sequences) aggregates the film’s power. Schimberg’s approach to structure and genre effectively mimics the experience of a hazy, beautiful, twisted, evaporating dream.

The film opens with a lengthy, scrolling Pauline Kael quote on the appeal of beautiful actors gracing the silver screen playing beautiful characters. Eventually, the quote disappears; cuing our descent into liminality and the ontological nature of filmic fact and fiction, beauty and ugliness, dream and reality. We are born into Chained for Life’s bizarro world with a slow, uncomfortable, creeping tracking shot following the beautiful Mabel (Jess Weixler) as she peers into hospital rooms. She eventually makes her way to the operating room to find an evil doctor (Stephen Plunkett adopting a heavy German accent) and his assistant mid operation. The scene is then sucked inside out by the shocking yell of “CUT!” Our story-world pulls back as we are introduced to a film set in full flux. The hustle and bustle of cast and crew is an Altman-esque sprawl of crafts people at work. Our doctor is, in fact, played by a naïve and pretentious actor named Max. While Mabel, our protagonist, is a sincere and sensitive actress playing a blind woman.

The film within the film is an artsy-camp exploitation project helmed by the demanding ‘Herr Director’ (a cartoonish Charlie Korsmo). We are introduced to a merry band of disfigured characters when they arrive to set via bus. Herr Director’s film relates the story of a mad doctor attempting to re-introduce these physically deformed characters into society. From here, the two opposing worlds of actors collide. The story fragments into small intimate interactions between these two drastically different sets of people. Adam Pearson, who you may remember from his haunting and tender performance in Under the Skin, gives a more extraverted and assured performance here as Rosenthal. While seemingly drastically different on the surface; the two groups are more similar than they initially appear. Like the beautiful actors, the deformed characters also surge with tenderness, doubt, and other emotions that give them rich inner lives. 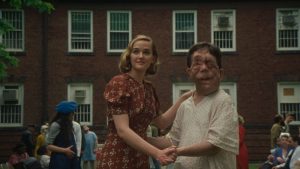 Schimberg draws from a variety of auteur influences; Lynch, Cronenberg, Roy Andersson, and Altman. Yet, although Schimberg is working from a spring of influences, Chained for Life is entirely its own beast. The photographic styling is marked by soft focus and soft lighting that hugs the silhouettes of the characters. The camera is mostly static and, occasionally when it moves, creeping. The characters are tightly framed and refer to the camera on a consistent basis (like when Mabel gives Rosenthal acting tips). The score is reminiscent of old Hollywood scores—classy, glossy and timeless.

Chained for Life is a film to get lost in. Schimberg upturns expectations about the mechanisms of narrative film (aspects of mise-en-scene such as actors, blocking, production design, cinematography, etc.) to its function as a storytelling machine (structure, plot, genre, character) and lastly its role as a method of message dissemination (both political and social). The true magic of Chained for Life lies in its ability to catch us off guard long after the credits role. The film lingers and mutates, ricocheting against the walls of the subconscious, leaving an indelible imprint.