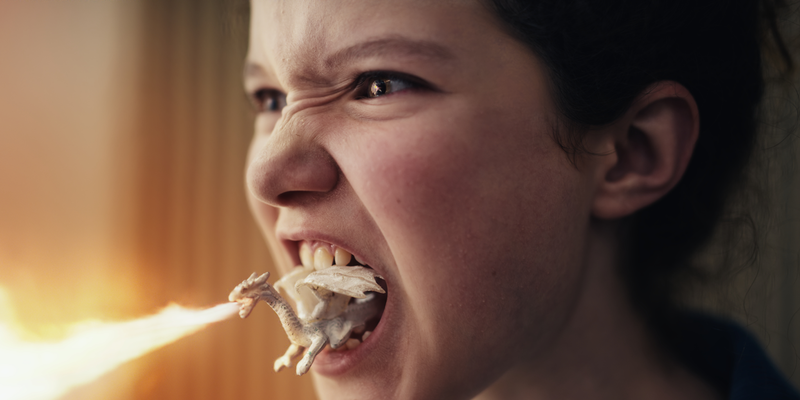 (The 2022 Tribeca Film Festival ran June 9-26 both online and in-person. Check out Melanie Addington’s movie review for Blaze. Seen it? Join the conversation with HtN on our Letterboxd Page.)

Early childhood trauma as a coming of age story is nothing new to the cinema but what Del Kathryn Barton has built sets Blaze to the imagination. With a beautiful cinematic world, her feature stars Julia Save as twelve-year-old Blaze, who encounters a horrible crime.

Her father (Simon Baker) tries to navigate the criminal system with his daughter, a witness. Her imaginative brain makes for an unreliable witness argument thrown at her at too young of an age but also a gorgeous cinematic world filled with magic and hope. Barton doesn’t glamorize rape but shows it without stopping a very long take of the first “no’s” to the beating to the rape to the murder, only breaking away for seconds to watch the POV of the child witness. It is a traumatic first ten minutes of a film.

But my goodness, the way Barton carries us around with Blaze as her brain wraps around what happened. The story twists and turns in only the way a girl on the cusp of womanhood could while also learning about crushes, romance, and her first period, culminating in a powerful montage of hormones and trauma and childhood and femalehood.

Julia Savage, formerly known for television and short films, performs as if this was her effortless brilliance. She navigates Blaze’s inner world so intensely on her face, along with colorful, imaginative art-designed sequences that help us fully process her emotions with her. And it works so well with Baker as a caring father, a good man, helping her fight for her identity at a challenging age to counter the other male we encounter in the film. The film weaves a careful balancing act of police and courtroom and therapy procedures around such a case while showing Blaze’s personal life and how the two come head to head in literal and figurative ways.

For Del Kathryn Barton, this is her debut feature following her Berlinale short, The Nightingale and the Rose. Known in art circles for her mixed media art, often incorporating glitter and sequins, this world she builds feels like a natural progression of her art.

Alongside art and props that make Blaze’s imagination come to life, stop-motion animation lets us imagine the voice inside her head coming to life through the image of a glass-eyed doll, her way of processing the traumatic death she sees. At the resolution, no longer imagining children’s dream sequences, she walks with her head held high, now clearly a woman. But her imagination manages to survive as we watch hundreds of other women fall in line before her only to disappear again, a healthy sign that Blaze will be just fine.

As much as the film has a happy ending and as much as the beautiful inner child of Blaze reminds us of innocence, the film never recovers from the brutality and its faced head-on as the main arc of her coming of age story. But while you won’t walk away from the film feeling great about the current state of affairs for women in the world, it hints at a glimmer of hope for the strength and merit of the next generation.

But films don’t get made by one person. The fantastic crew includes production designer Alex Holmes (The Invisible Man) and costume designer Margot Wilson (The Dressmaker), as well as sound designer Sam Petty (The Rover) and editor Dany Cooper (I am Woman). MK2 Films represents the film and began its pitch at Venice, moving on to Tribeca this week. The film has plans to release in Australia and Wales, but no announcement yet for American release. The film is produced by Samantha Jennings of Causeway Films, behind The Nightingale and The Babadook.