(Bellflower is now available on DVD

and in a Blu-ray/DVD Combo Pack thanks to Oscilloscope Pictures. It world premiered in the NEXT Section at the 2011 Sundance Film Festival and opened theatrically on August 5, 2011. Visit the film’s official website to learn more. NOTE: This review was first posted on January 24, 2011.)

You know that there is something very good going on when I am utterly stumped in naming a film that resembles the one I’m writing about. Bellflower has got sensitive hipsters searching for love in a dead end town and yet the guys don’t have guitars. They build flamethrowers and are into blowing shit up and shooting guns. The town is not a quaint small town, nor is it Los Angeles or San Francisco or Brooklyn. It’s trashy Oxnard, California. At first I was thinking of Gummo or Trash Humpers, but this movie is way more intricately crafted than those two. It also fetishizes desperate, wacky behavior a little less and is actually a bit more self-conscious of its adolescent love of smashing shit and acting dumb than the Harmony films. The great use of music with the slowed down images and the sunburnt solarized daylight exteriors took me back to Adam Bhala Lough’s great (Sundance cut, that is) Weapons, whose narrative and pace was driven by the cough syrup fueled Screw soundtrack. But that film had a way more straightforward, naturalistic use of characters and acting. 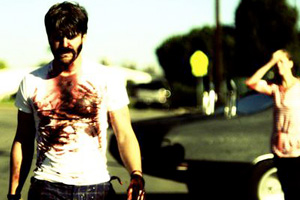 Bellflower, which features its writer/director Evan Glodell in the lead role, teeters at times into near satire with a Crispin Glover circa River’s Edge manic energy, but the story and the performances always in the end seem rooted in its sincere genuine intentions. Despite the pyrotechnics and manic mondo energy there is a bedrock sincere apocalyptic worldview that perfectly suits the age of the characters as they struggle to find their place in the world and restore some piece of self-identity after the turmoil of first love gone bad. In one great scene, our hero has his moment of recognition as he heaves into the toilet bowl announcing his flattened emotional state as he wipes away tears and spit.

The only film I can still really think Bellflower comes close to is the great Norwegian film Reprise, which premiered a few years ago at Sundance. Like that film, Bellflower seems to be driven plot-wise by the love of certain images, editing concepts, offbeat staging and framing, combined with a solid sense of character. The narrative in Reprise seems to reinvent itself every 20 minutes and twist off into another direction yet with each new narrative modulation it gained a velocity that left you more unsure of where it was headed.

Likewise, Bellflower has several different interludes, side trips and genres within one overall plot of boy gets girl, boy loses girl. Halfway through, I knew I was watching a film that was for sure not a Sundance Lab project and more than likely was the work of someone who had not gone to film school. It was clearly operating according to its own inspiration and was bold enough to go places that any teacher or workshop would have tried to force into a linear box that ultimately would have crushed its mondo energy. For example, the film appears to climax two or three times and yet even though I had a sense of it not ending when a normal film would have, I went along for the ride way past the stop sign and was pleasantly surprised where it landed. Without a doubt, Bellflower is an explosive, outrageous, and dynamic first film that lives way outside the margins of what we call indie film today. Hooray to Sundance for including it in the NEXT section. I doubt it would have ever been included in the festival at all in past years.