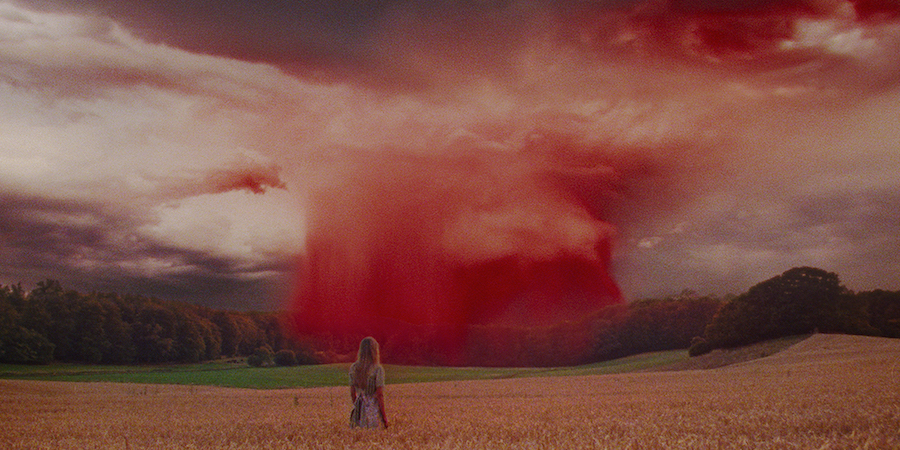 Based on the 1912 book A Night of Death, by Danish author Marie Bregendahl, director Tea Lindeburg’s As in Heaven does not begin in the morbid manner that such a source might indicate. Instead, young Lise (a magnificent Flora Ofelia Hofmann Lindahl) greets the morning as a bundle of teenage energy, happy in her large farming family but also excited to soon be leaving for a better education than what she can get at home. It’s her mother’s idea, who wants her eldest child, bright as she is, to have opportunities she never could. The taciturn patriarch is not at all pleased that he will lose Lise, and it is only in his presence that our protagonist loses all joie de vivre, and we see what she could become if she stayed. That is not the plan, though, so today she is free to frolic with her many younger siblings and the cute stable hand.

The fact that the matriarch, Anna (Ida Cæcilie Rasmussen), is very pregnant (again) and due any minute is initially nothing but a net positive to the atmosphere. But then, as the day progresses into night, it becomes clear that this will not be an easy labor. As midwives and others gather, sending the children away, Anna succumbs more and more to the raw pain of a birth not going well. Her cries of anguish frighten Anna, as well as her siblings and cousins, yet she cannot stay away. Beyond loving her mother dearly, she also knows that if she dies, it will be Lise’s duty to step in and run the household. No more city life, no more schooling, no more dreams. It’s a potentially dark turn to what began on such a sunny note.

Lindeburg, making her feature-film debut, shoots the movie on Super 16, lending it a rough grain (though the early images of farm life are beautiful) that suits the 19th-century rural life. Her actors look at home on location, all the children running over path, brook and grass in their bare feet. This is a life filled with genuine pleasures but also a lot of hard work and many rules. Gender roles, especially, are strictly proscribed. Which is probably why Lise’s father cannot stand the idea of a woman breaking free. We’ll see which way the winds of fate blow overnight.

Much as does the main character of Andrei Tarkovsky’s 1986 The Sacrifice (filmed on the nearby Swedish island of Gotland), Lise here makes a pact with God to spare her mother. Not particularly religious, she swears that she will voluntarily give up all the wonderful new experiences in store for her if only He will spare Anna’s life. Speaking the Lord’s Prayer, which she earlier rejected when her cousins and sisters prayed, Lise now asks for mercy. After all, in a world dominated by patriarchal expectations, what else can she do?

Beyond the immediate tragedy of a potentially deadly pregnancy lies that of a life stolen before it has begun. Will this be a celebration of female agency or a dirge for its loss? Either way, As in Heaven proves a searing meditation on the plight of women not only in the pre-modern universe, but also today, since we find increasing encroachments on their rights around the globe. Remove choice and what is left? Nothing but subservience, to either a terrestrial or celestial father figure. In other words, “on Earth, as it is in Heaven.”