(Chocolate is now available on DVD and VOD from the Magnolia Pictures offshoot, Magnet Releasing. Buy it at Amazon.)

If it looks like the kicks and falls in Prachya Pinkaew’s Chocolate hurt, that’s because they did. For anyone even lightly versed in modern Asian martial arts cinema (guilty, your honor), one has come to expect a post-film lowlight reel of bloopers and outtakes that confirm the action’s physicality and add a splash of dessert to an already candy-coated meal. In Chocolate, this becomes even more painful to watch, for this time around, our hero is not a strong man, but a tiny, teenaged-looking female (as in, an actual tiny, teenaged-looking female). Removing one’s sexist biases from the equation, it’s impossible to watch “Jija” Yanin Vismistananda in the film’s closing montage and not be even more wowed by her performance. A young discovery in her early twenties making her big screen debut, Jija shows some seriously major toughness by shaking off several extreme injuries that would have sent many actors—male or female—tearfully ambulancing to the hospital. Yes, ladies and gentleman, Jija is the real deal.

As for the film itself, if the idea of a mash-up between Nell and Oldboy tickles your fancy, then by golly, Chocolate is the autism/martial arts hybrid for you! A few years ago, a Thai woman, Sin (“Som” Amara), was in love with a powerful Japanese gangster (Hiroshi Abe), but when the local Thai godfather (Pongpat Wachirabangjong) found out, he was so overcome with anger that he shot himself in the foot. Here is where things already began to confuse me. Maybe I wasn’t paying attention, but this evil Thai gangster doesn’t appear to be this woman’s father, nor does he appear to be her lover. He’s just a mean gangster who doesn’t seem to want a fellow Thai citizen dabbling with his Japanese rival. Which is fair, I suppose, but is that a good enough reason to shoot oneself in the foot?

It turns out, on that fateful night before the Japanese gangster was forced to return to his homeland in order to escape certain death, their final act of lovemaking spawned a child. That child, Zen, was special. And not just “special” in the autistic sense of the term—though, dear lord, screenwriters Napalee and Matthew Chookiat Sakveerakul go out of their way to make her that too. Growing up on a heavy diet of Tony Jaa and Bruce Lee pictures and soaking up the activities at a neighboring Muay Thai boxing studio, Zen proves herself to be a supernaturally gifted fighter in her own right. After her mother becomes house-ridden with cancer, Zen is forced to take to the streets to collect the debts owed to her mother in order to cover her growing medical costs. And that’s when Chocolate starts to get really insane. 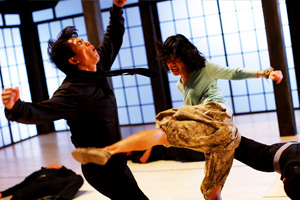 Early in the film, I felt sorry for the poor young girl who was cast in the role of Zen as an infant, for it seemed like every scene had her bawling her eyes out. For a while there, it started to border on torture. But once Jija showed up and fights started breaking out, I had a new actress to feel sorry for (watching the closing reel of outtakes only confirmed this). Zen is forced to battle pockets of men on her own (with very, very little help from her pudgy cousin), and though she eventually wins these showdowns, she receives some brutal blows in the process. Maybe her autism helps her to better withstand the pain? I’m not sure if that’s what the filmmakers were going for, but, sure, why not.

A random thought: in a movie like this when someone breaks their phone out of anger, just once I’d like to see them at the phone store in the very next scene having to suffer through the indignity of getting a new one. Maybe it could be a poorly run operation, leading this character to go on an even more punishing rampage right there, in the store. This would be a satisfying scene.

From the above description, it is quite clear that one mustn’t enter the world of Chocolate hoping for realism. Yet even if this bowl of soup doesn’t sound like your cup of tea, I would still recommend it for the film’s climactic fight sequence alone. Set on a fire escape outside a building, Zen fights off her enemies in an astounding display of live action choreography that culminates in a “how did they do that?!” tumble to the ground for several of her victims. It’s a scene that demands to be seen again in order to fully appreciate it.

But that’s not the reason Chocolate is destined to become a genuine historical artifact. Reading more about the making of the film, one learns that the main forces behind Sahamongkolfilm International were seeking to accomplish the impossible. Yet when promoter Somsak Techaratanaprasert, director Panna Rittikrai, and Pinkaew discovered Jija as an 18-year-old, they knew their dream was about to come true. Still, they needed to train her intensively for four years before embarking on the film’s production in order to build her into an action star the likes of which the world had not previously seen. With Chocolate, the world has seen it.

Or, to put it more adorably sweetly, here is a statement from Jija herself, taken from the film’s press notes:

This film is the product of much dedication from everybody involved, from the first to the last scene. It’s a new style of action movie, with a little girl as the star. I hope it will become one of your favorite films. Thank you very much.

(Visit the film’s official website, as well as its page at the Magnolia Pictures website, for more information.)