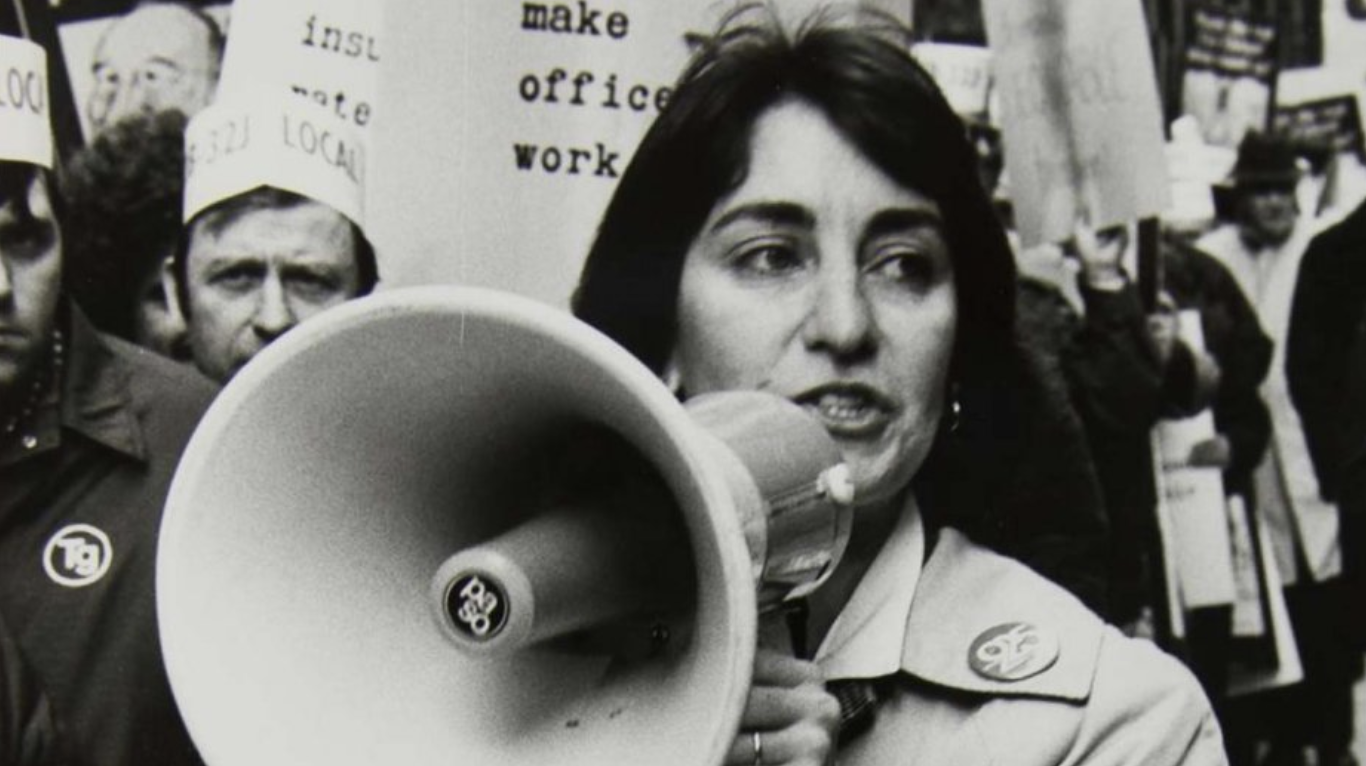 (9to5: The Story of a Movement from directors Steven Bognar and Julia Reichert has been hitting the fest circuit hard with bows at both SXSW and AFI Docs. Like what you see here on Hammer to Nail? Why not give just $1.00 per month via Patreon to help keep us going?)

It’s tough being a working stiff, and even tougher if you have to combat the unacknowledged privilege and abuse of those who employ you. Before the 1980s Reagan era bulldozed away many of the hard-fought 20th-century gains of organized labor and second-wave feminism, there was a time when the future seemed bright for those who struggled paycheck to paycheck. In particular, the moment seemed poised to offer female clerical workers better pay, hours and benefits. Things didn’t quite work out the way those bright and hopeful minds wanted, but perhaps in losing some short-term battles (and winning some, as well), the members of the nascent 9to5 movement secured some longer-term victories. Time will tell, but at least today we have a rousing documentary tribute to their efforts in the new film 9to5: The Story of a Movement from directors Steven Bognar and Julia Reichert (American Factory), in which the proud activists tell their story and explain why they mattered then and matter now.

As with many revolutions, the spark that launched the fire of change began with people just being fed up with being mistreated. Among the movies’ many subjects, we meet 9to5 co-founders Karen Nussbaum and Ellen Cassedy, who met young, in the early 1970s, and formed a strong bond based on their interest in social justice, first mobilizing for workers’ rights while employed at Harvard University in clerical jobs. From there, though they did not achieve their goals – they were merely politely listened to – they moved their ambitions nationally by first training at the Midwest Academy and then organizing beyond Boston, in places like Atlanta, Seattle, Cincinnati and more. By the end of the decade, they were on their way, recognized by the Service Employees International Union (SEIU) as a chapter and gathering increasing numbers as they went.

So powerful did they seem that they attracted the attention of actress/activist Jane Fonda, who would headline the eponymous 1980 comedy (a box-office hit), along with costars Dolly Parton and Lily Tomlin. Fonda is, herself, interviewed here, recalling how she felt at the time and how vital the movement’s work was and how much more more there still is to do. As fun as that cinematic success may have been for all involved, however, what triumphs lay in store would come from constant recruitment efforts and day-to-day exertions. And all just so that the coming backlash of the new decade could make everything that much harder.

Indeed, the film makes clear the real damage done to workers in the climate of President Reagan’s attacks on unions, starting with his firing of air-traffic controllers in 1981. To make matters worse, the feminist movement also suffered setbacks, the Equal Rights Amendment failing to garner enough state support (yet) to become law. But at least these vibrant, ever-hopeful women refused to back down, successfully organizing unions here and there before finally allowing themselves to be subsumed into a larger workers’ movement. And in 2020, they are still around, influencing the next generation by example. As a multiracial coalition – and one that had to overcome, as we see, racial polarization within its own ranks – 9to5 provides an especially good example for how we can overcome differences to fight together for a better collective tomorrow.

If the documentary, otherwise powerful and inspiring, has a dramatic weakness, it is in its final part, which feels rushed. We jump too quickly from the 1980s to our current age, just as we are starting to learn about the movement’s transition from supporting clerical workers (whose jobs were changing, anyway, in the computer age) to childcare workers. At just 85 minutes, the film hardly overstays its welcome, so more on this would have been appreciated. Beyond that closing frenzy, however, the movie stands as a wonderful testament to what can be achieved when women lead.