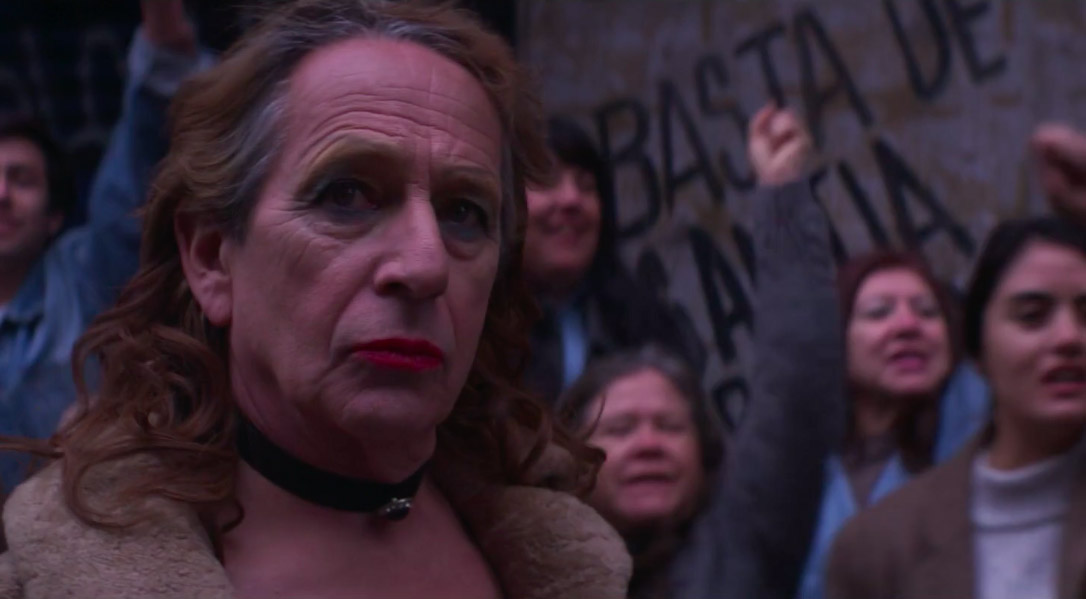 (the 2020 Venice Film Festival runs September 2-12. Like what you see here on Hammer to Nail? Why not pay just $1.00 per month via Patreon to help keep us going?)

Based on the eponymous 2001 novel by Chilean writer Pedro Lemebel, My Tender Matador shares certain elements in common with an earlier South American film, the 1985 Kiss of the Spider Woman, itself also adapted from a literary work, the 1976 book by Argentine author Manuel Puig. Both stories deal with revolutionaries, working to overthrow authoritarian governments, who find themselves bedfellows of convenience with apolitical queer folk whose attraction to the activists turns them into freedom fighters, as well. The gentle friendship that develops between the true believer and the pacifist-turned-rebel becomes a metaphor for the enduring power of human connection, striking a blow against the scorched-earth, divide-and-conquer tactics of despots. In this new film, director Rodrigo Sepúlveda (Aurora) expertly guides us through a beautiful tale of resistance, fueled by brilliant central performances from leads Alfredo Castro (Rojo) and Leonardo Ortizgris (Museo).

It’s the 1980s, under the autocratic reign of Augusto Pinochet, and things are heating up, underground groups organizing to liberate their country via assassination. But we don’t start there; rather, the film begins in a drag show, quickly (and violently) broken up by the police, who kill a performer in the process. Fleeing the scene is Castro’s “La Loca del Frente” (the only name by which we know him), an openly gay middle-aged man who was also one of the disrupted show’s stars. As the forces of law and order prowl the area, he runs hither and thither, until Carlos (Ortizgris), a younger fellow, pulls him into the shadows for safety. Thinking he might get lucky, “La Loca” agrees to an escort home, but once there, Carlos departs, though not after asking some pointed questions about the location.

Before long, Carlos returns, to hide some “art books” (or so he says), though he has to placate his host with some gentle flirtation. In the days ahead, he will come back, though this time with a group of fellow “art lovers,” looking for a place to meet away from prying eyes. “La Loca” is no dummy, however, and quickly figures out what is going on, though his loneliness, coupled with his attraction to Carlos, keeps him playing along. Eventually, he becomes more involved. All the while, we wonder whether he is just a pawn in the machinations of the rebels, or a human being they will treat with respect, given their stated opposition to the hateful policies of the regime.

Castro and Ortizgris work wonderfully together, their rapport an easy one, the truth of their potential relationship less important than the bonhomie they share. “La Loca,” though he understands how much is at risk, refuses to accept that the ostensibly frivolous sides of life – food, drink, fashion and sex – matter any less just because there’s a war on. And whatever Carlos’ ultimate motives vis-à-vis his partner, it’s undeniable that he finds him charming and comes to accept the validity of that worldview.

The title, “Tengo Miedo Torero” in the original Spanish, comes from a song of the same name that “La Loca” chooses as their secret code, appropriately sensual for the movie’s heated sexual tension. The tune’s overwrought emotions form the perfect soundtrack for not only the passionate gazes directed at Carlos from his would-be lover, but also for Chile’s state of turmoil at that time. In addition, cinematographer Sergio Armstrong (Neruda) delivers striking compositions that ably assist Sepúlveda’s mise-en-scène. But it all ultimately comes down to Castro and Ortizgris who, political conflagration aside, are deservedly the center of this particular cinematic universe.