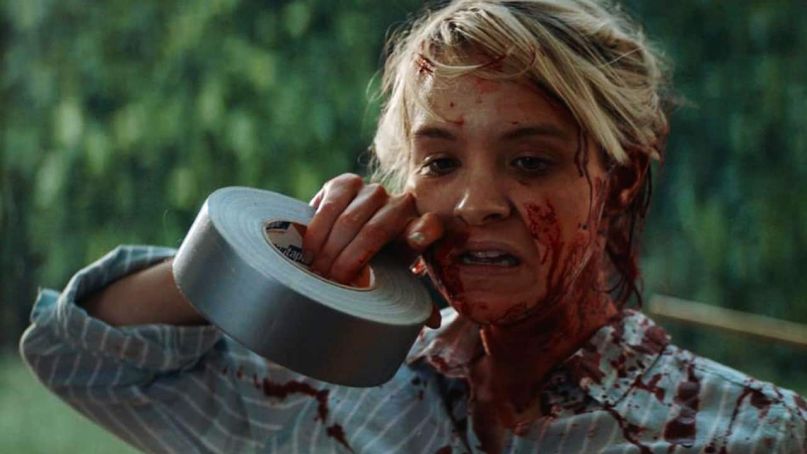 (Multi-hyphenated talent Brea Grant wrote and stars in Lucky. The film is streaming now on Shudder. Like what you see here on Hammer to Nail? Why not pay just $1.00 per month via Patreon to help keep us going?)

Brea Grant (A Ghost Story) wrote and stars in Lucky, a horror allegory that breeds Kafka-esque mystery with the home invasion genre. Natasha Kermani (Imitation Girl) directs this gripping polemic, which somehow manages to be simultaneously overt and enigmatic. It is certainly an indictment of the way society normalizes violence against women and routinely puts the onus on the victim. It’s for sure a delightful skewering of the fecklessness of the police department. I want to believe that it’s also a scathing takedown of white feminism. But if it turns out that we’re meant to wholeheartedly sympathize with the boot-straps touting self-help author/protagonist, that would mean that Lucky suffers from a bit of a perspective problem. Sadly, it’s that lack of clarity that keeps Lucky from being a home run. Instead, it’s just a pretty good hit.

The film opens on May (Grant) meeting with her agent (Leith M. Burke) about the failing sales of her book, “Go It Alone.” His voice falls on her muffled ears. She’s distracted and the news isn’t exactly good. In the parking garage, May notices that one of her fingernails is split and bloody. At home, she discovers a broken plate and shows her blasé husband, Ted (Dhruv Uday Singh), a comically large shard of glass that she found on the coffee table. He remains unmoved when May rouses him in the middle of the night to tell him there’s a masked man with a knife lurking in their backyard. Ted condescendingly responds that it’s only the man who comes every night and tries to kill them (more her than him, if he’s honest). They merely have to fight for their lives now. It’s not a big deal. Ted bludgeons the man with a golf club. The man bleeds out on their floor. May calls the cops, but Ted questions the point (fair). The body is already gone, just like it always is. The cops take some notes and tell May she’s lucky to have survived, BYEEEEEE. This is the most realistic thing that happens in the film.

In the morning, May wants to talk about what happened, but again, Ted doesn’t see the point. Why should they discuss something that happens every night? “This is how things are,” he says. She has no idea what he means by that but he can’t talk to her when she’s like this, so he leaves and doesn’t come back for DAYS. May is left to “go it alone”. She stocks up on supplies from the hardware store and prepares to fight for her life again, this time without Ted. The man comes. She fights and kills him. His body disappears, but his blood remains. She sustains lasting injuries from the struggle, but the man always appears unscathed when he returns. The cops come and tell her she’s lucky it wasn’t worse. And so, it goes over and over again. Everyone May tells about her plight is either not at all surprised and wonder why she’s making such a fuss, or they tell her she’s so brave and just so lucky to have survived.

Grant’s script definitely has a message and I’m pretty sure I’m on board with most of it. Unfortunately, in the interest of not over-explaining just what the hell is going on here, Grant never gives us a clear picture of, well, what the hell is going on here. This makes it difficult to pinpoint exactly what the film wants to convey. May continuously makes poor/mysterious choices, including repeatedly calling the police and literally running up the stairs away from the killer. She plans to tie him up but always looks away when she’s getting the rope, and when she turns back, of course he has vanished.

Despite the regular attacks (which start happening in daylight hours as well as at night), May attempts to lead a normal life. She attends an event for her book but is preoccupied and can’t seem to answer any questions from the audience. She calls Ted over and over again and it always goes to voicemail. She visits her sister-in-law, Sarah (Kausar Mohammed), who has two modes: expressing platitudinal concern and spacing out like a Stepford wife. Sarah tells May that she can stay with her for as long as she wants. May’s assistant, Edie (Yasmine Al-Bustami), also reaches out, but May insists she must follow her own advice and “go it alone”. 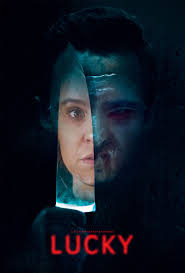 What does it mean that everyone in May’s life is a person of color, while May is serving up Karen Couture? Ted is useless and awful but Edie, Sarah, and Rob (her agent) want to help and understand. She doesn’t want their help. She just wants them to tell her what’s going on. This white woman needs things spelled out for her and the POC in her life don’t owe her that explanation.

When Sarah and Edie reveal that they have problems of their own, May is too busy with her own shit to lend a hand. She quotes her book at them, because that is what she has done and it’s clearly worked out great for her. Boot-straps style philosophy often overlooks systematic racism as an obstacle for people of color in success and survival. I don’t want to spoil the film’s climax, but I will say that May doubles down on the Solo Warrior thing when confronted by other women asking her directly for help. She is furious with Rob when he makes the mistake of implying that her first book’s success had anything to luck or privilege.

I hope that Lucky is as much a critique of tone-deaf white feminism as it is an indictment of the way society has shifted all of the blame for male violence on the female victims. But I can’t be sure, and that worries me. There are too many questioned unanswered, not the least of which is why May is just now remembering her nightly attacks, when they’ve clearly been happening for some time. Is Lucky a commentary on wokeness and how being aware of a problem is celebrated far too much for being the end of the journey to systematic reform, when it is really just the beginning? May wakes up to the problem, but that awareness isn’t a solution or even enough to get others to act beyond expressing their sympathies. Thoughts and prayers, etc. Fighting for our life is par for the course for women and there’s nothing anyone can do about it so we may as well accept it.

This is how I would like to interpret the film. If this is what they were going for, I love this movie. I just wish Grant and Kermani had been slightly more explicit about their intention so I could champion this film with my whole self instead of keeping one food on the fence. No matter what the intention, Lucky brings up many topics that beg examination, and that is an unequivocal positive. 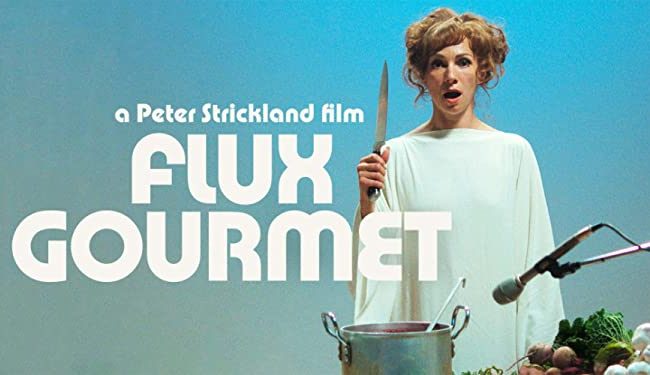