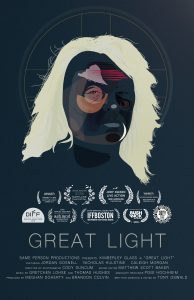 (You can watch Tony Oswald’s fantastic short film Great Light at the end of this interview. Like what you see here on Hammer to Nail? Why not pay just $1.00 per month to help keep us going?)

Hammer to Nail: So, we met in person at the 2018 Ashland Film Festival which was cool because you had just won the 2017 Summer Short Film Contest on HtN and both you and Michael Koshkin, who’s great short doc Ode to Joy was runner-up were there. However, I somehow never realized you’re an editor by trade and this is your first directorial effort. Can you talk a bit about your background in filmmaking?

Tony Oswald: Meeting you at Ashland was a highlight, as was all of Ashland. Seriously one of the best festivals in our run. And I love Michael Koshkin too. As for editing, it was always the part of the process I connected to most intimately, and it felt like a more tactile skill I could hone when starting out, less abstract than “directing” or “producing”. I think it was my way of easing into making movies of my own, problem solving for other folks. I’ve edited several shorts for Zach Fleming, Razan Ghalayini, Nora Stone and a couple features for Brandon Colvin. And editing has also been keeping me afloat with a wonderful job for Irene Wong on a couple shows for the Cooking Channel and Food Network for years.

But while I think that background helped me in writing the film, you learn quick there’s no substitute for being pressed for time by the elements, needing to answer to a crew of people with daylight dwindling. The band-aid was ripped off pretty forcefully and I learned a lot with this movie that I don’t think I was able to glean from editing. But I think directing this made me a better editor too. It’s really nice to see both sides finally.

HtN: I know a bit of how Great Light came into being but can you first explain how the film came about? As in, the basic germination of the idea? I know there’s some intense and personal parts to the film, you don’t necessarily need to delve into that unless you want to. Just some background on how the film started to take shape.

TO: Well, I’d been developing a film around my mother as the protagonist for a long time. I knew it would most likely include reference to her past which she has been incredibly open with me about throughout my life – and the eclipse was happening on her birthday and it would be passing right through our backyard. So the eclipse and my mom and the movie were all orbiting around each other and kind of fell into place.

When thinking about how to work the eclipse in I immediately thought of other films that centered their emotional climax around extreme weather events. I thought of Robert Altman’s Short Cuts with the earthquake and Spike Lee’s Do the Right Thing with the hottest day of the year. That melodramatic cosmic coincidence between the interior worlds of the characters and the exterior natural world really excited me and I knew we had to make it happen. But working with my mom, my sister Alicia and my niece Caleigh (who is also in the film) to get the troubling themes just right so they were all comfortable was a long process of showing drafts, getting feedback, reworking the script and allowing it to evolve with their suggestions. All of those changes were for the better in the end.

HtN: You have family members cast in the film and I’m sure that was cool. But, I also bet there were some challenges both in terms of family dynamic vs director dynamic. Did that sort of thing come up at all? 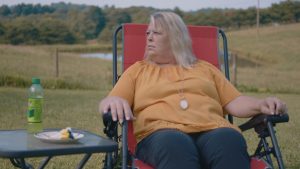 TO: I have to say, the movie was shot in my backyard and outside of the two wonderful actors Jordan Gosnell and Nicholas Hulstine, they were all my family members and a long time friend. I had no problems working with them, in fact I was probably MORE comfortable directing them because I’d written the parts for them. The challenge for me came from trying to be professional with the actors when I could cry or yell in front of my mom and she wouldn’t judge me. Keeping my shit together for OTHER people was the problem!

HtN: The film won our Summer 2017 short film contest, if I can ask out of my own personal nosiness, how many of any film festivals that we offered fee waivers for winners accepted your film?

TO: We were fortunate enough to be accepted to Ashland Film Festival, IFFBoston, and Maryland Film Festival all of which provided us waivers through winning Hammer to Nail. Several folks congratulated us on the win as well, so I know it boosted the profile of the film and I’m very grateful.

HtN: Aside from the fests we gave waivers for, where else did Great Light play?

TO: We also got into Dallas International Film Festival, won the Golden Badger at Wisconsin Film Festival, Won Best Live Action Jury Award at New Hampshire Film Festival, Official Selection at Bushwick Film Festival and Defy Film Festival. It was altogether a very successful run and I couldn’t be happier with the way it was received.

HtN: A few months ago you were one of a few filmmakers selected for a sort of movie boot camp put on by Jim Cummings writer/director/star of the outstanding feature Thunder Road. Can you share how that came about and how the experience was?

TO: That was another major surprise that stands as a career highlight. Jim Cummings (and Ben Wiessner who ran the program with him) were so transparent and open with all of us about how they had gone about making their movies and I think more importantly how they managed to turn a profit self distributing Thunder Road. They were both so humble and kind, and some of the other fellows there were filmmakers I had looked up to for years.

Mainly they gave us a calm, cool space to workshop our ideas, ask as many questions we could think to ask, eat awesome catered food, and let our films be fostered in a space with no stress. They also provided us opportunity to speak with an industry director who they felt we would be aligned with creatively, and I was fortunately able to speak with Krisha director Trey Edward Shultz. Great Light has gotten the Krisha comparison a couple times, which I am completely flattered by and he seemed to enjoy the film as well. We definitely share influences and it was amazing to get to pick his brain about not only his successes but his concerns as a director. Above all, every person’s candidness in that program was what I took away as most valuable.

HtN: What’s next for you? I see you have a feature you produced and are editing (starring goddamn National Treasure Robert Longstreet!) finishing up. Any other films we should know about?

TO: Yeah! My filmmaking partner Pisie Hochheim and I just locked the edit on Brandon Colvin’s third feature A Dim Valley (starring Longstreet who gives MAYBE his best performance if I can toot his and Brandon’s horn). We are consultant editing on a feature by Asantewaa Prempeh and we are in post on a short we just finished directing over the holiday.

We are also of course writing the feature version of Great Light which we plan to shoot next winter. Also keep an eye out for the feature The Naked Woman produced by Great Light’s producer Meghan Doherty which was one of twelve projects selected for the seventh edition of Biennale College – Cinema 2018/19. I would also just love to plug every project of every friend I met on the festival circuit this year because of this movie, but I can’t. It’s been a wild, wonderful year and it started with your vote of confidence at Hammer to Nail. I can’t thank you enough!