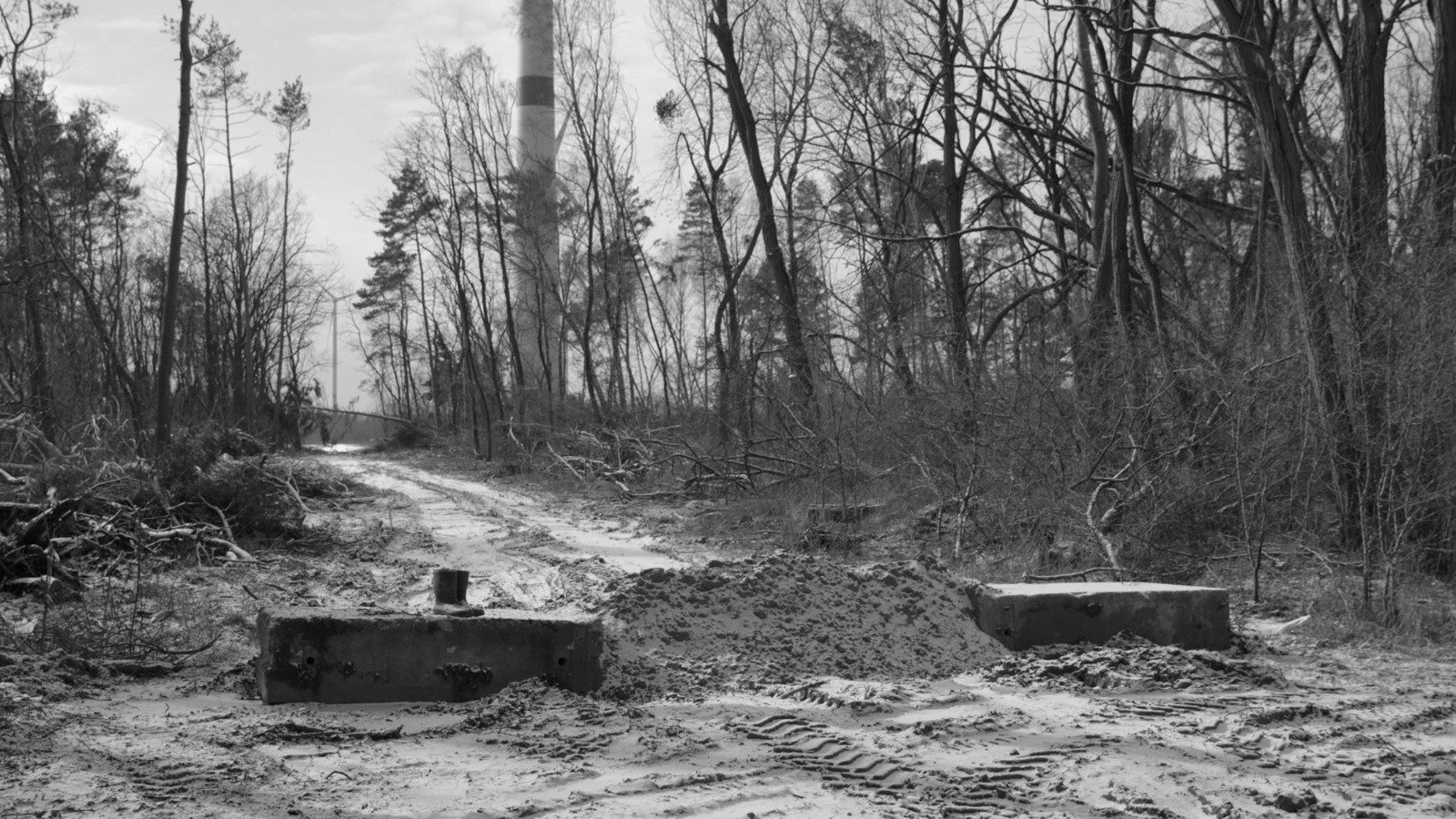 I met with German director Thomas Heise (Condition) on Saturday, September 7, 2019, at the Toronto International Film Festival, to discuss his new documentary, Heimat Is a Space in Time (which I also reviewed). The the film will be opening theatrical via Icarus Films in New York and Los Angeles on March 13th. A powerful meditation on family and country, and how oppressive systems of government affect both, the movie seems, at first, given it’s 218-minute length, like a daunting beast, but reveals itself, time and again, as a masterful treatment of its gripping treatment. Featuring documents, letters and photographs from Heise’s familial vault, coupled with expressive shots of locations mentioned as they look today, Heimat Is a Space in Time redefines the art of the slow, metaphysical thriller. What follows is a condensed digest of our conversation, edited for length and clarity. Assisting with translation was Toronto-based journalist Naomi Buck.

Hammer to Nail: Let’s talk about the origins of this film. Why tell your family history now, in 2019?

Thomas Heise: So, it’s the material from my family that forms the basis of the film, but it’s not just the story of my family. The reason I’m doing it now is because I’m the last one left and I had the feeling that it had to be done, so it’s hard to say exactly, but I just knew that at this point I needed to make this film.

HtN: I always like to say that out of great specificity come universal truths, and you’re using the arc of your family story to say something about Germany, but perhaps about larger issues, as well. What do you think your film says about human nature and the metaphysics of who we are?

TH: This question makes me think of a quote: “Mankind is determined to behave in a certain way.” This film looks at the relationship between the individual and history. The point that I make, and the point that these human stories make, is that a person cannot escape history. We can either be defeated by history or overcome history, but it’s undeniable that history forms who a person is. I think it’s an important message for this contemporary moment, because we are living in a bubble of the present where we’re less aware of what is behind us and what is ahead of us, and I think it’s important to be reminded that we are constantly being shaped and defined by circumstances around us and by history.

HtN: Why the epistolary format? You could have told the story in a number of different ways, but chose to read letters from your family . You use other methods, as well, but the film is overall epistolary, with you as the reader. Why do it that way?

TH: The reason I used the format of the letters is quite simply that the letters exist – there were 40 binders of letters – and I had a student working on this for an entire year, going through and transcribing them. So, I take the very intimate source material of a letter and I’m asking the viewer to make a picture created by these letters; the viewer can create that picture on their own. I don’t provide the picture. I could have done it in the epic tradition by creating characters, filling in the holes, but that’s not the way I wanted to approach the material.

It’s a very personal film that is the story of my family. I’m telling it because I’m the last remaining member of the family who can tell the story. And you can see the arc: it starts with my grandfather and his history and then at the very end, on the balcony, you hear my voice. It takes the trajectory from two generations back to myself.

There’s a story I can tell that illustrates what I’m trying to say. As a child, I used to play at my grandmother’s house and she had a chest of drawers in the corner, and I could crawl underneath it, and behind it was a box, and in this box were letters. And this was before I could read or write, but I knew that these letters were interesting, and I took the letters. And as soon as I could read and write, I read them. Those were the letters that my father had written to his mother when he was in the camp that is shown in the film.

It was an experience he never spoke about; he was someone who never really talked about his feelings, like a whole generation of Germans who didn’t want to talk about the Holocaust, whether they’d been perpetrators or victims. In these letters, I could see a side of my father that I never really encountered with him, as a person, and that experience, of the contrast between the letters and what they represented and my father as a person, is something that I’ve carried with me all my life, and is something that informs everything I do. 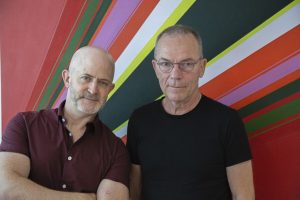 TH: Yes, I am finally speaking on my behalf, at the end, but I am the narrator, throughout.

HtN: Got it. Now, you also said that you allow viewers to produce their own images, but that’s not entirely true, because you choose, very carefully, what we’re looking at when we hear the audio. At times we see the letters, at others we see the list of names of those killed, and at others we see landscapes. You make very conscious choices of what the viewer sees at various times. Could you discuss how you made these choices?

TH: You’re right. I chose what people see. (laughs) We originally thought that we were going to have three locations: train stations in Dresden, Berlin and Vienna. That was the initial idea. In the end, we ended up driving thousands of kilometers across Germany and Austria and just shot the images that resonated with me, based on these 40 binders of letters that I had in my head, at that point. So, there were certain locations where I could see that there was going to be a direct correlation between picture and sound, where it made sense, based on the letters, to use the location.

One of those was the work camp and the other was the place where I served as a soldier in the East German army, which is also where Wernher von Braun, who is mentioned in the film, had his villa. And those barracks that you see are a type of barrack that was used in World War II and then recycled in East Germany. That architecture repeats itself. Those were places where I knew we had to shoot; I knew those were going to be useful.

Otherwise, we just collected images as we traveled. For instance, that highway where you have the broken tarmac was not something that we looked for. We just found that and I knew that was going to be useful. The same goes for the antennae that you see at the end of the film; there are a bunch of shortwave antennae, and I knew they were going to be useful. Certain things I knew were going to work but I didn’t yet know how.

And then, when we started putting it all together, we did not start at the beginning, but in the middle, with the love story between Rosie and Udo, the East-West love story. I thought that was the easiest way for me to start because, for one, it was a story that was unfamiliar to me, so it was new. I knew that what we ended up starting with in the actual movie, which is that text about war, which is so intense, was something that if we started working with that, I think we would have exhausted ourselves. You can’t maintain that pace in a film. So, it was good to start in the middle and it was good to start with a love story.

And then, after that, it was good to attack the other components together, like the meditation on war and then, for instance, that scene with the list of the Jews in Vienna, which ended up being 25 minutes in the film, the entire take. Initially, I thought we’d use maybe 3 or 4 pages of the list, but I realized that it made sense and was more powerful to take that whole series of letters and that whole narrative thread and keep running those names until that story ended with their deportation. And so, we did that and it ended up being 25 minutes, and at the end of that I knew I wanted the song and I knew I wanted the image of those piles of rubble. Having done that, we looked at it, and I said, “Don’t touch it.” Even though I know, had we revisited it and thought about it, we could have made it a lot more accessible for the audience, I thought it was quite powerful how it was done.

Originally, we intended the film to be an hour and a half, so I had no idea that we were going to be able to use all the material. In the end, everything we shot was used. There’s nothing left over.

HtN: (laughs) That’s a big difference between a 90-minute film and a 218-minute film. But it is powerful and evocative. Final question: why keep, in the English version of the title, the German word “Heimat,” which is like “homeland” in English? Why not translate the whole title?

TH: “Heimat” is not “homeland.” It’s a word that can’t be translated. The understanding is different. I was at a conference where someone explained “Heimat” as a place where you don’t have to explain yourself. It’s a concept that is so German that you can’t translate the word.

HtN: Understood. Well, thank you very much. I enjoyed the film.