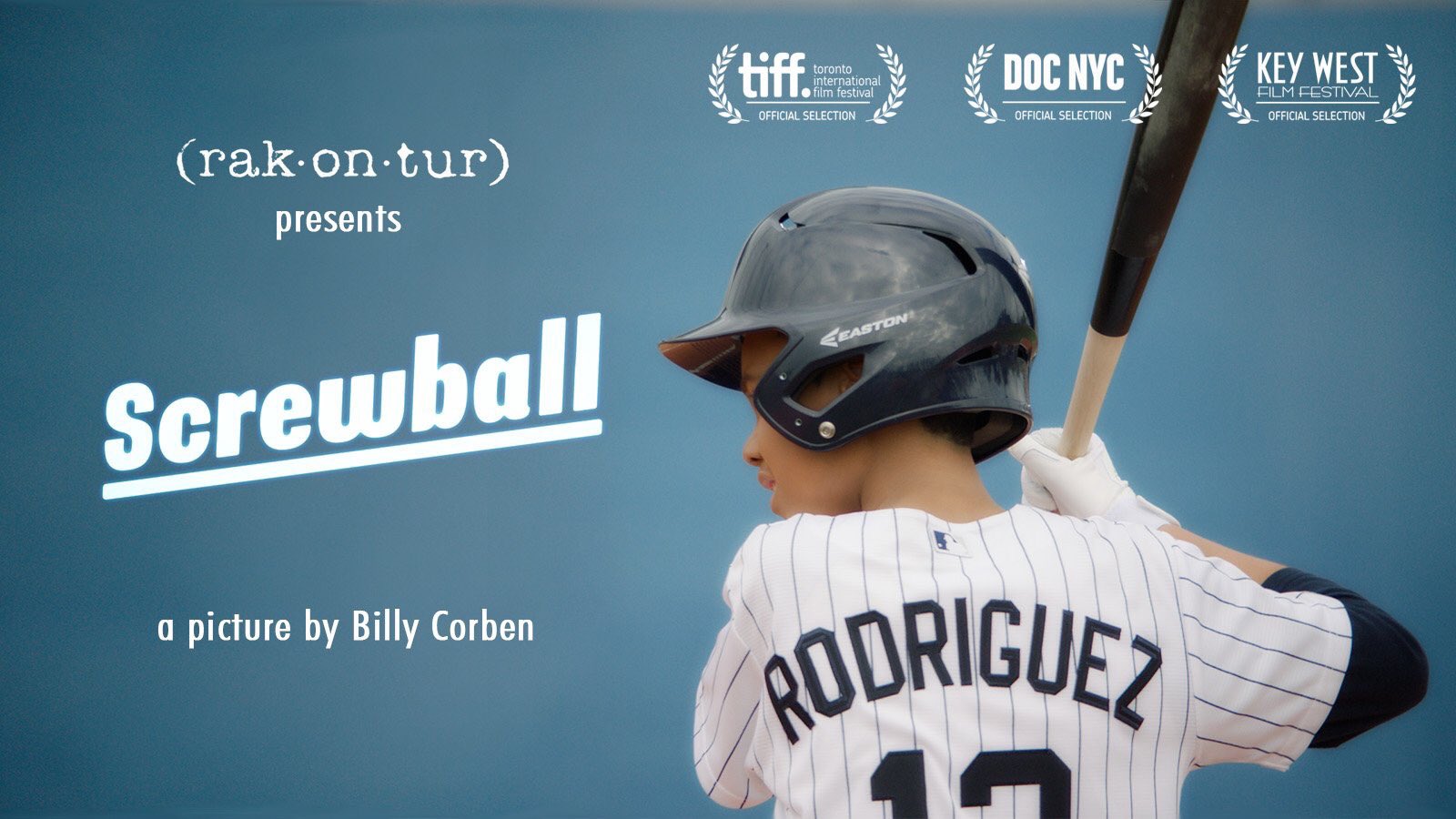 I met with director Billy Corben (Cocaine Cowboys) and producer Alfred Spellman on Saturday, September 8, 2018, at the Toronto International Film Festival, to discuss their latest feature documentary Screwball (which I also reviewed). The film tells the story of one of Major League Baseball’s many performance-enhancing drug scandals, this one centered on Tony Bosch, a Miami doctor – excuse me, make that “doctor” – and that paragon of sportsmanship and gentlemanly rectitude, Alex Rodriguez (A-Rod). It’s a wild and crazy journey, treated with all the respect it deserves; in other words, none! Corben delights us with peppy music, fast-paced editing and the hilarious device of using child actors, lip-syncing to audio from talking-head interviews and dressed up as the adults they portray (complete with glued-on facial hair), to perform recreations of actual events. Looking for a good time? Have I got a drug, I mean, a movie, for you. Here is a condensed digest of our conversation, edited for length and clarity.

Hammer to Nail: So Billy, let’s start with your device of the children in reenactments of various parts of the story. For me that was one of the more fascinating elements of your documentary.

Billy Corben: What children? (beat) No, I’m just kidding. (laughs) That was sort of our revolutionary contribution to the form, I guess. But not entirely revolutionary, as it was inspired in no small part by Spike Jonze’s 1997 music video, Sky’s Is the Limit. He was faced with the unique challenge of directing a posthumous video. Biggie had just recently been killed and Spike decided to do a straight-forward, straight-faced, classic Big Boy Records video, complete with mansion and fancy cars, and popping bottles in hot tubs. Only he hired 8-, 9-,10-year-old actors: baby Biggie, baby Puffy, baby Little Kim, baby Busta Rhymes, and then had them lip-sync the song, and it was brilliant. And that was sort of the seed of my own idea.

We were dealing with a challenge where we had a documentary that was not about sports, but kind of sports-adjacent…When we do a sports doc, like for ESPN 30 For 30, we interview people and then we use a ton of game footage. There was no game footage to use here. All the shady dealings happened in back rooms, and fake doctors’ offices and hotel rooms and locker rooms. And so, we knew we needed to recreate these events. And it really struck me how these adults acted like children. (laughs) And it seemed to me like this was an obvious, and I think very appropriate, device. You can’t just do it with any story. I don’t think “Cocaine Cowbabies” would be appropriate, for example. I mean that’s just not…yeah.

HtN: Although there’s plenty of cocaine in this film.

BC: Is there a lot? Well it’s Miami after all … In any case, we needed a creative solution, and this seemed to work. It’s farcical, as with the title, Screwball, à la Elmore Leonard, the Coen Brothers, or Carl Hiaasen. It’s just too zany to be believed, really. So, we wanted to take that approach, and the “recreas” with the children just seemed to support that cause.

HtN: And certainly, you do a great job with showing how the adults themselves behave as children. So, as you are both from Miami, how many of the people who are in your film did you know before making it, if any?

BC: [Miami New Times journalist] Tim Elfrink we knew from around town, but no, none of them personally. But we were certainly aware of them, God knows, at least since 2013. And we discovered that we had significantly fewer than six degrees of separation from a lot of them, or most of them. That’s the thing about Miami; it’s a really small town. It has a very transient population, so people who have been there for a while are really all interconnected in a very incestuous way. (laughs)

HtN: Well, I’m from Baltimore, and we claim that we’re the most incestuous town, because the phrase “Smaltimore” is what people always talk about.

AS: Well, John Stewart had popularized the Florida Man character on the Daily Show for the past 10 years, and I always said that Tony Bosch is the quintessential “Miami Man.” We are a city that doesn’t have that factory where you go to work for 40 years and get the gold watch at the end. We are a border town, where everybody exists from hustle to hustle. And some of them are legitimate hustles and some of them are gray-market hustles and some of them are black-market hustles. And so, as Billy put it, because we are a small town, and everybody has a hustle as opposed to, you know, sort of a traditional, real job, you find that the Venn diagrams of people that you know tend to be a lot closer than they might be elsewhere.

HtN: Well you do sell this idea of “it could only happen in Florida,” or at least in Miami, in your film. Going back to the children for a moment, how did you cast those roles? Because they’re really wonderful. (laughs) I mean they don’t necessarily look at all like the adults they’re playing but they’re wonderful. The A-Rod kid is just delightful in his arrogance. How did you find them?

BC: The casting was tough, but obviously the essential ingredient in this process, because if we didn’t cast it right this was all just some crazy, misguided idea that I had. (laughs) So, we spent a lot of time and were meticulous about it. I remember we had two great kids for A-Rod. And Alfred was like, “It’s the kid with the light eyes, because he’s one of the most famous men in the world, and you have to get the likeness.” And I think the likeness was at least, you know, accurate enough with a lot of the kids, though we obviously gave them facial hair in scenes where it was essential. (laughs)

The kid, Blake, who played A-Rod actually came onto set to shoot the baseball sequences in his pinstripes, and then his white uniform for the away games. He had studied Alex’s swing. And we were like, “Oh, shit, that’s amazing!” Honestly, we didn’t have a lot of time for rehearsal and this and that. We had to fit them for wigs, we did hair and makeup tests, we did costume fittings, we had a lot of pre-production stuff to do. But this kid, bless his heart, he knew he was going to have to show up to a baseball field and look like Alex Rodriguez and he kind of nailed the mannerisms and the swing, the way he lingers with the bat with his left hand…It was really fun to watch. Listen: these weren’t children; these were actors. You know? And they took this very seriously and they worked as hard as everybody else did. 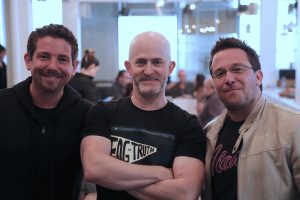 HtN: And you can tell!

AS: Yeah, just to follow on what Billy was saying, this was a real tightrope to walk here, because this could have failed spectacularly as an experiment and, you know, this was an 11-day recrea-shoot. One day we were feeding a hundred people, when we shot the night club scene, at Live, with all these extras, and since it was on a doc budget we had to stretch every dollar to its breaking point. Luckily, the weather cooperated, which is always a wild card in Miami when you’re shooting on location, so everything just kind of fell together. We could have fallen off the tight rope, at any point, but we pulled it off.

BC: And there was a real commitment, when possible, to authenticity and attention to detail. We shot at at least three actual locations where the events took place. Alfred mentioned Live night club, there was also the Fontainebleau Hotel in Miami Beach, the Ritz-Carlton in Key Biscayne, the Sports Grill in South Miami where the events that we are recreating actually occurred. And then, everywhere we could with the wardrobe, the hair and makeup, with the facial hair…(laughs)…and with the minor details in the set dressing. When Tony Bosch first saw the movie, with the recreations, which he didn’t know about until we showed it to him, he was astounded at how we had taken the photographs from his office and had essentially rebuilt that office. He was like, “Holy shit, that sign was there, that bookshelf was there, that’s where my diploma was.” He just marveled at that.

And in fact, there’s a scene in the movie where Porter Fischer, the whistle blower, who is scorned after his four-thousand-dollar loan is not paid back by Tony Bosch, decides that he’s going to, you know, blow up this whole operation and give his medical files to The Miami New Times to break this story. And, as it turns out, Alex Rodriguez is mere collateral damage in this shady Miami rivalry. But in our recreations, you see baby Porter sneak into Tony’s office in the middle of the night with his cell phone and start snapping pictures. He starts snapping pictures of file boxes. He snaps pictures of Tony Bosch’s lab coat that has “Dr. Tony Bosch” embroidered on it. And we flash two stills, and those are real stills that Porter Fischer actually took in Tony’s real office and we were able to seamlessly incorporate that into our recreations. That’s how meticulous we were but you wouldn’t know it unless I just told it to you. It’s seamless.

HtN: Well, it’s really amazing. Speaking of production design, I have to know, because I’m not an aficionado of A-Rod…Does he really have a painting of himself as a centaur, or is that your invention?

BC: Well, as you heard in the third act of the documentary, Jim Rome actually makes a reference to it. You know, he says, “Go back to your mirror, go back to your centaur painting and let us never see you again.” I don’t know if that’s an apocryphal tale, but I will tell you that we have heard…or a while that was a funny thing that people would say about A-Rod. We have heard from people who have been in his home, and in that apartment, who have seen it. So, as far as our research shows, it is a true story. Yeah.

HtN: That’s good enough for me!

HtN: Gentlemen, thank you so much. I really enjoyed the film!