[NOTE: This is the first in a hopefully ongoing series of posts by Ricky Camilleri devoted to the music video format at its most invigorating, ambitious, and inspired.]

There was a brief period of time (2004-2009) when MTV decided music videos were a thing of the past and changed all of its programming to reality TV. If you were a music video fan for those few years, all you had was the past with VH1 Classic playing an endless loop of Rod Stewart’s “Forever Young.” Fortunately, with the advances in digital technology (DSLR cameras mainly) and audiences constant craving more and more content via the web, music videos have made a kind of return. It’s become normal again for an artist, whether they’re as financially viable as Nikki Minaj or as indie as Real Estate, to make multiple videos for each album. And while the budgets may differ drastically, it’s clear that digital technology has democratized music videos for bands and filmmakers, thereby ushering us into a time where videos stand proudly as artistic expressions as opposed to mere promotional tools.

So, with digital filmmaking being the clearest impetus for this resurgence of an artistic, free-minded, indie spirit in the world of music videos, then why did the filmmakers behind one of 2012’s most popular videos—Grimes’ “Oblivion”—decide to shoot their video on celluloid? Over the course of a few emails, the project’s primary creative forces—director Emily Kai Bock and director of photography Evan Prosofsky—explained why they chose 35mm and go on to discuss the feature films that have inspired them.

Hammer To Nail: So, first things first. Why 35mm?

Evan Prosofsky: Technically speaking, film is still the highest quality image capture method available. Shooting on 35mm (all the way up to 65mm 15 perf IMAX) still offers the highest resolution, color fidelity, dynamic range, etc. But what this actually means, other than making film sound controversial and fancy and expensive, is that shooting on film changes the way I can work as a cinematographer. As an example, the last two videos I made (Grimes and Kool Music) I shot on 35mm because it helped free me up; I didn’t have to worry about losing detail in bright skies and hotel windows (Kool Music) , or in places with huge variances in contrast like the Grimes video where you had the super bright, punchy stadium lights backlighting Claire [Boucher]. In a way it sounds like a cop out, or makes me sound sloppy, but the thing is, we were so stressed for time on both of those videos, that as the DP shooting film took a huge load of stress off me knowing that these areas with extreme contrast were going to come out looking beautiful; digital just wouldn’t have been able to handle them in the same way. I would have had to use big expensive lights (attention getter, time waster) to help lower the contrast to something workable, and there’s no way we would have been able to light those areas without permits and a ton of helpers. It would have changed everything.

H2N: What were the costs of shooting on 35mm? 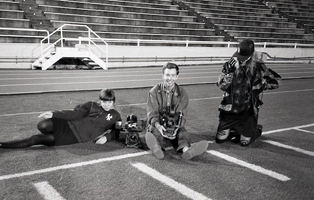 EP: I’d been working on this film Waterpark for a long time, shooting when I had money and just slowly editing bits and pieces together. Eventually, I’d spent around eight grand of my own money, I was super in debt and the project still needed a bit of shooting done, so, desperate, I applied for a grant through the AFA and somehow later that year got some money together. I couldn’t believe it, I’d just moved to Montreal, I’d gotten back from a bike trip from Montreal to Halifax where I spent all my remaining money, and I was essentially going to have to move back to Edmonton to live with my parents to save money and finish Waterpark. But then I got this call from my mom, all hysterical, she said I’d gotten the grant, it was one of the best days of my life for sure. It basically reimbursed me for what I’d already spent out of pocket, but with a little extra on the top, enough so I had all this money to finish shooting Waterpark and pay myself for my work. When Emily and I started talking about the Kool Music and Grimes video, I just thought, f**k it, we need to go all out. I felt the projects needed to be shot on 35mm and thankfully Em agreed and was willing to keep a really low shooting ratio (less than 25 minutes for Grimes) so that I could pay for them. Its a testament to how smart and intuitive of a director that Emily is that she recognized they needed to be on film and was willing to make concessions like that so we could do so, I’m really thankful for that, and really thankful I took the leap and shot them on film. So far people really seem to notice the difference and the effort that was put in, and it’s a really flattering, incredible feeling :)

H2N: Obviously, the world has taken to the video as it has over a million views now. Where did the idea come from?

EKB: Well, to start, I really had no idea that this was going to happen. I thought we were just making a video for my friend and putting it on my Vimeo. Then 4AD got a hold of it and got the ball rolling with Vevo. But, the inspiration came from many sources: the beauty of stadiums, the male archetype, sports as a spectacle/performance, the idea of parodying machismo culture, but, I also wanted it not to be heavy handed, so, having Claire react to it all seemed to add a funny/light dynamic. I originally wanted to film her in front of a monster truck rally or WWF show but, there wasn’t one of those happening when it came time to shooting it.

H2N: Do you think the video being on 35mm has helped in making it so popular? It certainly looks like the music videos of our memory and not as digital as others these days.

EVAN: I think absolutely, yeah, the audience can tell the difference between digital and film; people seem to respond extremely positively to projects I’ve shot on film, whereas digital projects tend to go by the wayside. I don’t actually think that that’s entirely because of the aesthetic differences between digital and film (though I’m sure it has something to do with it), but happens more because projects shot on film tend to have more time and care put into them. Again though that’s probably a generalization and not always true. There’s tons of kids shooting with the Alexa now and making incredible things.

H2N: What filmmaking influences did the two of you draw upon for the video? 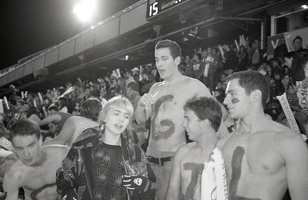 EKB: Well, we were actually making two videos together at the time. We talked a lot about Paris, Texas, and My Own Private Idaho for the Kool Music Video. But, I would have to say, some major influences of mine in general, and maybe not for these videos, are Alex Prager, Gus Van Sant, and Philip-Lorca diCorcia—basically artists that create a kind of fiction/documentary hybrid form.

EP: I love the way Gus Van Sant handled the intro scene (in My Own Private Idaho) so much, the way he introduces River’s character is so perfect… In the end we didn’t exactly shoot the Kool Music vid like MOPI, but I think we were inspired more so by the way Gus handled River’s character…Then of course with No Country For Old Men, I couldn’t get the motel scenes out of my head. They’re so beautiful, lit mainly with natural light from the lamps and augmented a bit, which definitely factored into how I treated a lot of the interiors. The DP for most of the Coen Brothers’ films, Roger Deakins, actually has his own forum where you can ask him questions, which is absolutely incredible. So I got to talk to him a little bit about how he handled those scenes and tried to apply it where I could.

H2N: When approaching a song, do you think about how to best represent the song, or the artist, or do both generally go hand in hand for you?

EKB: Depends on if the artist is featured in the video but it’s mainly the song. The song gives you an emotional cue. People always say, “Oh well, if one artist doesn’t like a treatment you could just save that treatment for someone else later,” and I think It would be difficult because most of my ideas are song/band specific.

H2N: What is the process like for when the two of your work together?

EKB: He carries the heavy stuff! No, we pass ideas back-and-forth before we shoot and talk about aesthetic. When we’re there we generally have to make things happen fast. So, I point and yell at him for things to shoot and he shoots it. When we have time to set up a shot I tell him what framing I have in mind and he usually has a way of complimenting it to make it better. But, I guess I’m still sort of figuring out the dynamic of what makes a good director. Like, you know Tarkovsky was a fascist apparently, but lots of other directors aren’t.

H2N: What are you working on next?

EKB: I just finished my first narrative short and just signed with some USA and overseas representation who have since been sending me some tracks to pitch on for music videos.

EP: Working with my friends Emily and Angus on a couple videos and finishing my first film Waterpark, which you can donate to on indiegogo, if you’d like to :)