I met with French Canadian director Renée Beaulieu and lead actress Brigitte Poupart on Friday, September 7, 2018, at the Toronto International Film Festival, to discuss their collaboration on Les Salopes or the Naturally Wanton Pleasure of Skin (which I also reviewed). The movie follows Poupart’s Marie Claire, a scientific academic and married mother of two, as she explores a variety of libertine extracurricular activities that offer the sexual freedom she craves. Occasionally graphic in its mise-en-scène, Les Salopes is always penetrating in its exploration of the tradeoffs we make in life between responsibility and personal pleasure. Here is a condensed digest of our conversation, edited for length and clarity.

Hammer to Nail: So, Renée, in French your title is “Les salopes ou le sucre naturel de la peau,” which means “natural sugar of the skin,” but in English it is “the naturally wanton pleasure of skin.” Can you explain your choice to translate it that way?

Renée Beaulieu: Well, in French, I chose the title, but I don’t speak enough English to translate by myself. So, I needed help to translate, and the team and I didn’t want to translate word for word. We tried to find something that was equivalent to the French, but not a direct translation.

HtN: It’s a perfectly fine title in English, but I’m just always curious about these kinds of changes.

RB: And also, we didn’t want to translate “les salopes” to “the sluts,” because it’s not exactly the same.

HtN: Right. “Salope” has multiple meanings. So, Renée, this is your second feature, after Le garagiste, which in English was entitle “Adrien.” What, if anything, did you do differently this time around?

RB: Oh, my God! It was totally different, because the script and the subject were so different. I was in a completely different place.

HtN: Had you learned anything making the first film that you could then apply to this new experience? If you were talking to an aspiring filmmaker, what might you tell them about the difference between a first and second feature?

RB: On Le garagiste, the shooting conditions were crazy, because we shot very quickly. I think I learned a lot more on this new film. But on Le garagiste, I did learn that it is very important with whom you work; the actor and actress are very important. I had a very good actor and actress on that film and wanted to make sure I had good actors here, too. I also learned that the Director of Photography [DP] is important.

HtN: Did you work with the same DP on both films?

HtN: So, speaking of fine actors, how did you find Brigitte?

Brigitte Poupart: I was walking by, and she just saw me … (laughs)

HtN: (laughs) And she said, “That’s Marie Claire! That’s her”

RB: (laughs) I did the casting by myself. I looked at pictures, and Brigitte rose to the top of my list. 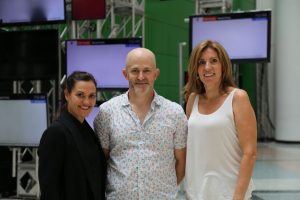 HtN: Just based on the photo?

RB: Yes. But I also knew of her. And I had a lot of things to do, because I produced and wrote the film, but she was always on my desk. So, when it was time to do the casting, I talked to a friend who knew her. Physically, she was exactly the type of woman I wanted. It was important to me that she be beautiful, but also intellectual and independent. She should be credible in this part. Not a pin-up.

HtN: Yes, that is how I would describe many or your actors in this film. They are attractive, but believable in this world. Not pin-ups, as you say. So, Brigitte, this is a tough role, in which you bare yourself not only physically, but emotionally, as well. I had only previously seen you in Fake Tattoos, in which you play the mother. Had you done this kind of role before, and if not, how did you prepare?

BP: I had done roles like that before, but on stage. The feature-length documentary I made, Over My Dead Body, was about that work I did, with Dave Saint-Pierre, in which we talked about human dignity through bodies and souls and how you reflect that when you’re naked on stage. And you’re right that in this film it’s not just about naked bodies, but naked souls, as well. And this is how I actually decided to work on this character. What is inside?

First of all, she’s an academic, and because of that, I wanted to portray a woman with deep thoughts. She’s not emotional about things. She’s looking at things differently, and because of that, she wants to dig into the questions and find out what the difference is between feelings and sexuality. This, for me, was the main question that defined the character. I wanted to embody that kind of person, who could look passive, but was not. She’s really active.

HtN: Sure. So, in a film like this, with so much intimate physicality, how much rehearsal did you do ahead of time? A lot, or did you leave some to improvisation in front of the camera?

BP: There were no rehearsals, I think.

BP: We talked a lot about the subject, and I think that Renée was confident in her choice of actors, and then we had to work, by ourselves, to propose things. The subtext was really interesting. I didn’t tell Renée my subtext, but we talked about the subject and the situations. But the subtext was the kind of mystery you keep for yourself, and it gives something more mysterious for her, and for the audience, as well.

RB: And about the actual shoot, we shot very quickly, without a lot of takes, but with long takes.

HtN: You would roll for a long time on a shot.

HtN: Did you also limit the crew size in those scenes?

BP: We were a small crew, anyway. We didn’t need to do a closed set.

RB: (laughs) We were already a closed set!

HtN: I understand. So, Renée, you are also an academic, right? You teach at a university, as do I. There is a plot line, in your film, which involves a questionable relationship, and power differentials, between professor and student. Marie Claire didn’t need to have that relationship. What were your thoughts in bringing that element into the script?

HtN: You did make sure to make this particular student not be an official student of hers. He was just auditing the class. But I also found the dialogue between Marie Claire and the female student she is mentoring, whose research project fuels this whole thing, very interesting. The advice that Marie Claire gives her rides a line where it could be controversial to some people.

BP: Absolutely. We’re riding a fine line. And she is caught between feeling and sexuality, with this guy – this young student – for example, because I think she wants to see if she can feel the pressure of guilt. And she finds out that she actually really has feelings for this guy. And this puts her in real conflict with herself. And this, for me, is really interesting to explore, as well. And the advice that she gives to this young lady is more about her professional life, which is, for her, way more important than anything else. Be someone. Give birth to yourself. Do something with your life. And after that, whatever happens, happens.

HtN: Sure. Although I can still see her advice offending some, particularly looking at it through a feminist perspective.

HtN: In any case, I enjoyed the film. Congratulations on making it and presenting it here in Toronto!