A Conversation With Ovidie (PORNOCRACY)

HtN: So, for the directors like Pierre Woodman or Rocco Siffredi, who are in your movie, and who you show having difficulties earning remuneration for their work, what do they do to make money?

When you visit these sites, it’s as if you’re just going to YouTube. And so we are not necessarily conscious of the fact that the content we’re watching has a high likelihood of being pirated. If I go to Pirate Bay, and decide to download a film illegally, I know that I am doing something illegal. I am conscious of that fact. If, however, I go to a “tube” site, I don’t know that I’m doing something illegal. After all, it’s just there. No law prevents me from doing it. In France, we have an internet law – called HADOPI – which is ignored, but that should, in theory, result in a warning or a fine if one downloads something illegally. But if you go to one of these sites, there is no resultant fine. As a consumer, we are completely insulated. We do nothing illegal.

HtN: In the film, you show us, without perhaps a direct declaration of culpability, who these forces are, behind these sites. You hint, as a journalist, that it might be so and so, or so and so. Do you, in fact, have more precise evidence of who they are, that you didn’t reveal in the film? Because it would be interesting to know why there is no law against all of this. Maybe someone has applied to pressure to keep that from happening.

O: So while I was making the film, I heard many, many rumors. Some were more plausible than others. But I decided to leave in the film only what I could prove. For legal reasons and also because I, myself, wasn’t sure. Even today, I have my doubts. People still shoot information my way, even though the film is done, saying, “I learned this. I learned that.” 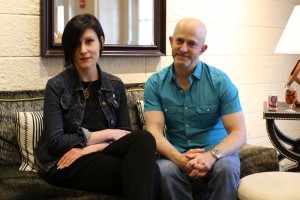 HtN: But without direct proof.

O: But I have heard so many contradictory rumors. I think that’s part of the game, actually. To kick around these competing rumors. To put out false information.

HtN: As in contemporary American politics…(laughs)

O: Because piracy existed before.

O: Well, first of all, I am surprised that no one made it earlier. Frankly, someone was going to make it one day. I don’t understand how I, humble French documentarian that I am…(laughs)…was the one to do it. I’m surprised that the big investigative journalists haven’t done it. So I think it was important that it be done. After that, for me, it was a long gestation period. I started collecting data about 5 years ago, from among folks within the industry, asking “Have you heard of this company?” But it really began in 2012, when [internet porn king] Fabian Thylmann was arrested. And I had never heard of him.

HtN: He was the CEO of ManWeb.

HtN: And you saw that your own films were also on these sites.

O: That happened around the same time. I became aware that there were some films in which I had starred, shot in the late 1990s, on VHS, released in only about 500 or 1000 copies, and which were on these sites, without my consent, and which had been viewed by millions of people. I said, “What is this mess?” And when I tried to have them taken down, I realized how difficult that would be. I would have to find the original producers, because I didn’t have the right to ask to have them taken down. I managed to get some removed, but they popped up again a week later. It was impossible. And at the time I honestly thought that these must be illegal sites, headquartered in Russia, New Zealand or I don’t know where, which were not traceable. And suddenly, I find out in the media that the owner of these sites lives 90 minutes from me, in Brussels. I thought that was strange.

HtN: The original founder of ManWeb, whom we meet in the movie?

O: No. That’s not how it happened. I have always worked in parallel. I began acting in 1997, and shortly thereafter – pretty much right away – I became a director. I directed my first film in 2000, and made films for 17 years. Voila. From 2000 to today. I wasn’t very prolific. I made feminist porn films, one a year maximum, and alongside I pursued journalistic activities. That allowed me to maintain contacts and watch the world evolve, while being not completely of that world, able to analyze it from the outside. I started making documentaries in 2011; this is my third. I worked in radio, I published books, I completed my studies. I now have a Ph.D.

HtN: Pornography, at least that made by men, is traditionally exploitative of women. What differentiates your own films from this tradition?

O: The films that I was able to direct – and today I don’t do that anymore – are part of a political movement of feminist pornography, which has had three separate waves: the 1980s; the beginning of the 2000s; and then, thanks to the internet – because the internet also has positive qualities – starting in 2010. The principles of feminist pornography are not about making films for women. Because women do not all have the same fantasies: there is not one woman; there is not one sexuality. So it’s a pornography that seeks to deconstruct stereotypes. The problem is that in mainstream porn, it’s always about the same routines, in the same order. Always the same trajectory around the “property.” With some variations. Sometimes there are two men, etc.

HtN: And is that why you originally entered the world of pornography? To make films like that?

O: Yes. Pretty early on. I was a militant feminist at that time, and I was fascinated by the work of Annie Sprinkle, Candida Royalle, and others. And at the same time, I really wanted to direct. I wanted to make films, and not just sexual ones. I like playing with images. It’s something that has long been my passion. But at 19 years of age, when one has no experience, and one is trying to persuade producers to give money, the only genre that is willing to do that is porn. (laughs) That’s the only place where a producer is willing to give money to a 19-year-old girl without experience. And so that’s how I was able to make my first film. And that first film was a real film, with real technicians, a real set. It was terrible, by the way, my first film. Awful! But it was a real film with a real crew.

HtN: So what motivated the opening of your film, where we are in a car in Budapest, having a conversation with someone, and then – bam – you get into a car accident and we cut to black?

O: When we began the editing process, it became clear that we needed to begin the film like that. I remember that we were in the car and I was so absorbed in what he was telling me – it was so shocking, what he was telling me – that we simply forgot we were in a car and almost had an accident. Otherwise, this introduction deals with such alarming information that I knew we had to start the film that way, even if it might pose problems for the distributors. But I said, let’s start here, because this is the reality of the porn industry today.

HtN: Well, congratulations on your film!