A Conversation With Catherine Breillat (THE SLEEPING BEAUTY) 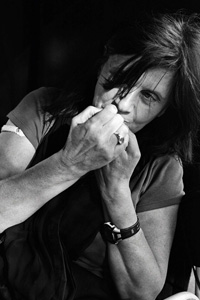 Catherine Breillat is one of those directors whose films I greatly anticipate, excited about what sort of intense and cathartic experience I am going to have watching her latest creation. Her films Fat Girl, 36 Fillette, Anatomy of Hell, Romance, and A Real Young Girl have left deep impressions on me as a filmmaker and as an artist. Her brutal and raw depiction of the crudeness and beauty of female sexuality disturbed me at first, but brought me back again and again for more. Her work has stirred controversy across the globe and her films have been banned in theaters worldwide.

Breillat’s latest film, The Sleeping Beauty, is an “adult” fairy tale about a little girl, Anastasia, moving through many different lands like Alice tumbling through Wonderland. While some of her past work was more blatant, this film speaks in metaphors. A young girl gently strokes a knife, quietly evoking a latent sexuality, whereas in a previous work a character probably would have done something way naughtier with it. In Anatomy of Hell, the main character asks Rocco Sifredi’s (a former Italian porn star) character to penetrate her with the handle of a rake. In A Real Young Girl, Charlotte Alexandra’s character makes herself vomit on the bed out of disgust for her body before painting her nipples blood red. Anastasia has many guides along the way: a dwarf queen and king, and an Ice Queen on her sleigh, show her their mythical world like Virgil guiding Dante through hell. They act as kind guides through Briellat’s world of myth and fantasy. The Sleeping Beauty offers a gentler, softer approach that may be more appealing to a wider audience, but may also alienate some die-hard fans of her more gruesome work.

I sat down to have a conversation with her and spoke half in French, half in English. Though frightening, it proved to be very interesting. (The Sleeping Beauty is being distributed by Strand Releasing and opens at the IFC Center on Friday, July 8, 2011.)

H2N: [in French] I’m so sorry I’m late! Train issue. I’m going to attempt to practice my French with you. I’ve followed your work for almost ten years now and am very excited to meet you. I’m not a real journalist—I write for a blog that lots of filmmakers write for, so hopefully I’ll have some different questions for you. As an artist you began making films such as A Real Young Girl and 36 Fillette, which are both very blatant in their expression of burgeoning female sexuality. Since then you have made films such as Bluebeard and Sleeping Beauty that are both more subtle in their dealing of sex…

Catherine Breillat: [in French] How are they more subtle?! They are very cruel tales.

H2N: [in French] In Fat Girl and a Real Young Girl there are some really intense moments that deal with female sexuality—a few rapes of children, using household objects for pleasuring oneself, etc.—things that are pretty clear. In The Sleeping Beauty things are much more symbolically expressed. 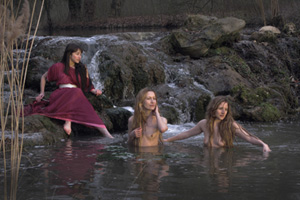 H2N: [in French] Totally, which as an artist…

CB: [in French] As an artist there is no reason to keep pushing and getting more and more and more shocking. I keep making the same films as most artists do, and I think when I made Bluebeard and all my films, it’s always about a story of a young girl and the themes are very similar.

H2N: [in French] Yes. In Sleeping Beauty the young girl Anastasia travels through many distant lands with bizarre characters and events that happen in each place. Do these different places symbolize different phases of human or adolescent growth? Could you explain a bit?

CB: It symbolizes… well, when you are young how you learn about the world through fables, legends, stories. I brought those together through the eyes of a child. Because when you are a child you are living through the fables and fairy tales.

H2N: [in French] With the two love scenes in Sleeping Beauty, Anastasia’s first sexual experience is with the gypsy girl and then with the prince and they are very different for her. Why did you chose to have her sleep with the girl first when she was waiting for the boy for so long? 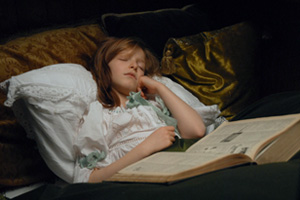 CB: [switches to English] For me, I am very very old but when I was an adolescent, in my life, I found the first flirtation, even if you are not gay, was always with a girl. In the story they say it doesn’t count—that she stays a virgin even though she has been with the girl. They keep it a secret. It is the pleasure of discovery without danger, which happens with the male character.

H2N: It’s such a contrast since when she is having sex with the boy she is screaming and he is crying.

CB: It’s more emotional with him and she screams out of pain and pleasure.

H2N: After that scene you see the tiny Anastasia all grown up in modern clothing, heels, a pregnant belly, and a short dress, and we are no longer in the fairy tale. How did you decided to make that transition?

CB: I change a lot of things on set and that was one of them. So much for me changes when I’m on set and I see the characters and everything is real. I write all my own scripts. It’s interesting to invent on the set—it’s not boring, like just shooting a script and storyboard… anyone can follow that straight line. But for me, I like to invent and be spontaneous.

H2N: And you always do this? 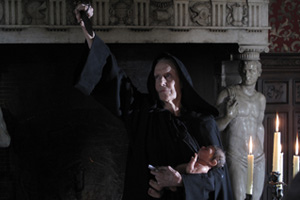 CB: Yes, with all the movies. I of course have people that are integral to making that work but yes. I have very long casting sessions and usually do not chose professional actors. I do a lot of things like buying costumes and making them… the red dress from Romance I had for 10 years before.

H2N: Wow. Speaking of Romance, your films have some very, very tough and amazing roles for women. Very challenging and very raw, and great characters.

CB: But professional actresses are petrified of doing these parts. They complain that there are no interesting roles and when there are they get scared.

CB: Yes but when she tried to watch the film for the first time she left the theater with her eyes closed!

H2N: In the US I think these roles are more rare as well. There are plenty of “sexy” roles but not so many of the really raw ones.

CB: I do not like sexy. Sexy means nothing to me.

HTN: Yeah, we Americans are really into “sexy.” Obviously you can look at any music video, magazine, etc etc. Teens are getting sexy all over the place. But it’s cool you don’t try to sexualize or glamorize the adolescent women in your films. I was a teen girl and I think 90% of the time was really unsexy and really unglamorous. 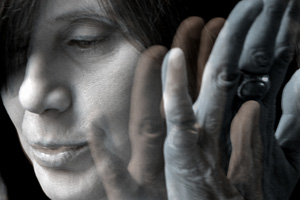 CB: And we have no idea how this generation is going to end up… little girls are aware, like Lolita, but there is an expected puritanism at the same time. It’s a very interesting and complex subject…

H2N: Do you think it’s different in France?

H2N: Yeah, I’m sure. What is your next film about?

CB: It’s the last in the fairy tale trilogy. It’s going to be Beauty and the Beast. I’m making this series actually for a French TV channel and it’s a very small budget for a period piece. I have to shoot in 19 days.

CB: Yes, with a great DP. It was both of our first times with HD and it was a challenge for both of us. I adore him very much. But he lives in the US and it was tough to convince my producers to use him. I pretty much have always had the smallest budget of any of the French directors.

CB: All of the films that I screen with in festivals usually have triple my budget.

H2N: Why do you think that is? Does it have to do with the material?

CB: When I began as a director yes it was about that. But now there are so many female directors and things have changed. It’s because I don’t make movies for everyone. And they aren’t ever family movies that people want to go spend a quiet evening at. My evening screenings are usually empty, it’s weird.

H2N: It seems like young couples should go on a date.

CB: Not really… because they aren’t really sexy movies.

H2N: Well I’ve made everyone I’ve dated watch one or two of them and they are usually intrigued by something or are very disturbed. Anyway, tell me about what your take on Beauty and the Beast will be like.

CB: Well I’m going to make that but also I’m working on another project that is called Abuse of Weakness, which is a legal expression in French. It’s when someone becomes your friend and takes advantage of your weakness. It’s not a love story, it’s about a friendship. When two people are addicted to each other.

H2N: Oh dear, they are kicking me out. Okay, so nice to meet you. I love your courage and the risks you take.