A Conversation With Bob Byington (SOMEBODY UP THERE LIKES ME)

Bob Byington is a jerk. During our interview, he gave monosyllabic answers, barely made eye contact, and put a cigarette out in my lentil soup. Okay, that didn’t really happen. Truthfully, he was quite amiable albeit under the weather when we met up at Austin’s High Ball. We had just come out of the final SXSW screening of his new movie, Somebody Up There Likes Me, where it world premiered in March. Somebody Up There Likes Me is a comedy that—along with Byington’s two earlier movies, RSO [Registered Sex Offender] (2008) and Harmony and Me (2009)—arguably makes him the first director of deadpan. And while his material is not nearly as dark as, say, Todd Solondz’s, Byington’s comedies do maintain an undercurrent of seriousness. But in sitting down to talk with him, I was most curious about his penchant for making comedies while most of his indie colleagues were… not. [NOTE: Somebody Up There Likes just screened at the 2012 Sarasota Film Festival on April 21st and 22nd and next screens at the San Francisco International Film Festival on April 28th, 29th, and May 1st. Visit the film’s official website to learn more.]

Hammer to Nail: What’s your idea of a good meal? 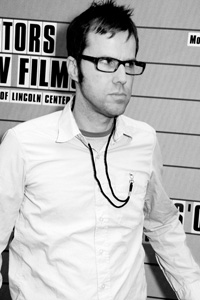 H2N: A steak lover. Does that mean you grew up in Texas?

BB: No, in Nebraska.

H2N: Then what brought you to Austin?

BB: Came down for grad school, then I went to LA for a while, and then came back here.

H2N: Your new film, Somebody Up There Likes Me, is getting some good buzz. Your name is inextricably linked to the term “deadpan.” Does that feel confining to you as a filmmaker?

BB: Not particularly. I understand that the film probably seems stylized, and while I don’t necessarily see it that way, it doesn’t make me uncomfortable.

H2N: This is your third feature working with the usual suspects, Nick [Offerman], Kevin [Corrigan] and Keith [Poulson]. What is it about those guys that you like working with them so much? And how do they contribute to the script and the final movie?

BB: They’re all my friends, and I think they have a quality on screen that people respond to. I tend to send them first drafts of scripts and I trust their input, though they don’t always give a lot. Keith tends to give the most, probably because he is still young and not quite as jaded. And Nick and Kevin are both remarkable in their unjadedness, for as much as they’ve worked.

H2N: How was working with Jess Weixler (who plays Lyla), a newcomer in your casting? 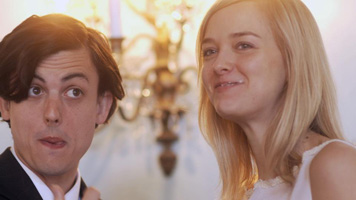 H2N: How do your actors approach the material? Are there different ways to approach deadpan humor?

BB: Well the three main people in Somebody Up There Likes Me are pretty different, in terms of how they understand the script. Keith is a non-actor, Nick is a comedic actor, and then Jess is an actor’s actor. So, they all really approached it differently. And Jess, by the way, really wants to act. She doesn’t like to be cast for her personality or her looks. She wants to play the character. She wanted to play Lyla, whereas Keith is playing a variation of himself, as is Nick, to some degree. It’s a little weird casting a non-actor in the lead of your movie when you have other actors knowing what they’re doing. But I think it worked in this movie.

H2N: Was this the first time you worked with (cinematographer) Sean Price Williams?

BB: I had met Sean on the set of The Color Wheel and just liked him. I liked what he was doing on set, his energy. That was enough for me. He shot Frownland, and I loved that movie but it does not look good. And I think the producers [of Somebody Up There Likes Me] were concerned like, this guy is not gonna make the movie look good. But I never doubted him.

H2N: At the Q&A after the screening I attended you kind talked about how pointless discussing the movie was. Is that a reflection of your comfort level doing Q&A’s?

H2N: Do they feel pointless on some level? 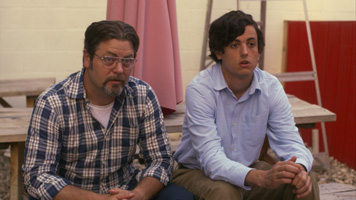 BB: Keith and I were talking about this. They really do feel like an opportunity for the audience to see the people that are in the movie. I like that, that’s cool. And you see who the writer/director is and you want to see what they look like or hear them say “hi” or something. But as far as discussing the movie, I’d much rather hear Stephanie [Hunt, who plays Clarissa and is also a musician] sing.

H2N: I hate to beat a dead horse but let’s go back to your childhood. Growing up, did you always have a penchant for comedies?

H2N: I thought perhaps comedies had inspired your storytelling but perhaps it’s quite the opposite. For all I know you grew up watching Ingmar Bergman movies.

BB: Yeah, I wasn’t really all that focused on comedies. It just sort of turned out that way later in my life. Stroszek (Werner Herzog) was a big movie for me. I think that was an incredibly funny movie. That and Annie Hall were probably the two comedies that probably had the most influence on me. You mentioned Bergman. I don’t think he makes comedies, obviously, but he made a movie called Sawdust and Tinsel (1953) that I thought was very funny. But there’s a sort of poignancy in the humor of Bergman that I respond to.

H2N: Does writing comedies come naturally to you? What is your process for working on the script? Do you work out the lines with your actors or do they receive a finished script? 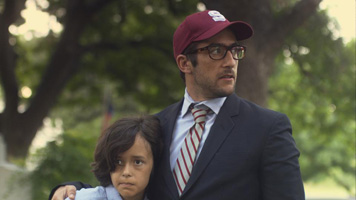 BB: I gravitate toward comedy, but the way the scripts get finished is a bit of a mystery—my “process” as a director varies from performer to performer.

H2N: Have you been tempted to write a dramatic feature? Or maybe an indie thriller. They seem to be very popular at the moment.

BB: I wouldn’t have the first idea how to write a thriller.

H2N: So much great comedy is taking place on television. Have you considered working in television? Is this something that is in the works?

BB: I don’t think TV would really work, though a web series might be worth a stab.

H2N: You and Alex Ross Perry seemed to be a couple of the very few indie filmmakers producing farces (for lack of a better term). Why do you suppose there are so few?

BB: That’s a good question; I don’t know. I think it makes sense to try and make comedies, but every filmmaker is going to obviously have his or her own sensibility. Alex and I have somewhat similar sensibilities, but we are also very very different; I could never make a movie like Impolex, as much as I admire it.

H2N: How did you guys meet?

BB: We met at CineVegas, at their 10th and final chapter. I met Alex and hit if off with him. And then we sort of just stayed in contact. I really liked his movie Impolex, which didn’t have tons of fans.

H2N: Kate Lyn Sheil was in that.

BB: That’s where I saw her and thought I’d like to put her in a movie. Then he wrote The Color Wheel which I read. It’s a great script and he wanted me to play the professor. He came down to a screening here in Austin. One thing led to another and there he is in our movie. It’s great. People respond to his movie.

H2N: I think the scene in The Color Wheel that you have with Alex and Carlen [Altman] is one of the funniest in any film I’ve seen in years. If I could have my own award show, that would be a winner. It’s how I became aware of you. And the ending of that movie was perfect.

BB: The great thing about Alex’s script is how it drives toward that ending.

H2N: David Gordon Green has been accused of abandoning his indie roots by making commercial comedies instead. Do you find yourself in a position of wanting to or having to go bigger budget and with more recognizable names? Would you rather continue making smaller films that are under most people’s radar?

BB: The budgets for the last two films I’ve made were at least double the budget of the preceding film, and I’d like to keep it up.