The term “mumblecore” gets thrown around a lot when discussing films from SXSW that deal with 20-somethings and relationships. Mumblecore has been described in countless publications as a new “movement” to grow primarily out of New York’s underground, independent film circuit. But if you ask an average critic what a mumblecore film is, they usually give you a long list of cinematic techniques—nonprofessional, improvised performances; digital handheld camerawork; loose time structures that cover, at most, weeks in the characters’ lives—that actually rule out most of the films they discuss and instead whittle the entire movement down to only one movie: Joe Swanberg’s Hannah Takes the Stairs. Nonetheless, filmmakers like Aaron Katz and Andrew Bujalski get lumped in under the umbrella of mumblecore because of an underlying tangible reality that their films give to the relationships and lives of the young adults portrayed within their microcosm of a world. 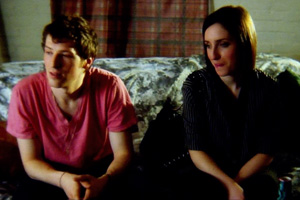 The characters in Daryl Wein’s Breaking Upwards live in that same world, the claustrophobic bubble of New York City, which feels just small enough for you to run into people you know at any given moment and just big enough for those you don’t know to penetrate your life in meaningful and abrupt ways. The story follows a couple who, feeling stilted from the sense of this world’s walls closing in after several years of a relationship, decide to adhere to an agreed upon set of rules and restrictions as a way to reinvigorate their love life. They take days off, split up digital chat rooms that each can dominate and encourage each other to follow a strict regiment of space building, all in the interest of rekindling what they once had. The presence of both sets of parents in the story (probably the strongest among a plethora of well-written, excellently executed performances) serves to reinforce the tiny space the characters live in, one in which they can’t seem to get away from their emotions for each other.

Having said that, Breaking Upwards seems to cross some artificial line into a realm where by no stretch of the imagination could one describe it as mumblecore. The carefully honed acting, beautiful, stable cinematography and pointedly decisive direction all tend towards more traditional Hollywood tropes. But the structure certainly draws from the loose narrative form that we’ve seen come out of countless SXSW projects over the last few years. The film itself has very little to do with its premise. The couple quickly surpasses their exercise and inevitably spirals into a series of collaborative events that destroy their relationship. This is what sets Wein’s screenplay (penned along with co-writer Peter Duchan and lead actress Zoe Lister Jones) apart from any of its influences, taking aspects of the so-called “mumblecore” phenomenon—the purist desire to make cinema that meticulously reflects the pains and triumphs of real life—and successfully combining them with the customs of a big budget romantic comedy, creating a stirring combination that, though seeped in escapist convention, hits surprisingly and emotionally close to home.

In a time when the independent film world seems to be ready to move on from divisive projects built on improvised scripts and handheld camera work, Wein’s film stands out, learning from this ever-growing contemporary film “movement” while reminding us why the traditionally manipulative techniques that tear at your heart strings became tradition in the first place.