THE WINDS THAT SCATTER

(After a lengthy list of documentary shorts, writer/director/producer Christopher Jason Bell takes all he’s learned in that area to write and direct his first feature, The Winds That Scatter. Utilizing a documentarians touch Bell’s camera shows the existential angst that not only faces minority people in America working low paying menial labor jobs but also comments on that state of the working class in our country today. The Winds That Scatter is currently making the festival rounds.)

The path of Ahmad’s (Ahmad Chahrour) life is scattered like leaves in the wind when he loses a menial job as a gas station attendant. Ahmad is an immigrant from Syria who hopelessly wishes to start his own taxi service; until that glorious time comes, he must doggy paddle his way through the relentless undercurrents of the American economy. Writer-director Christopher Jason Bell observes the middle-aged Syrian everyman as he shuffles from one job to the next via a series of subtle-yet-poignant vignettes. For a while, Ahmad relies upon friends and family for support as he waits for Allah to rescue him; but the soul-crushing wear and tear of his never-ending quest for stable employment is enough to make Sisyphus blush. After a seemingly endless string of mechanical and dehumanizing jobs, the work begins to takes a toll on Ahmad’s faith, friendships, and sense of identity. 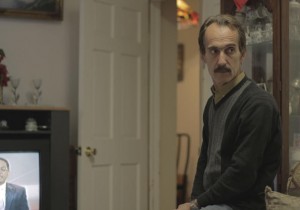 Lensed by Paul Taylor, we intimately observe Ahmad as if he is the subject of a cinema verite documentary. The naive protagonist internalizes his emotions, which keeps the dialogue to an absolute minimum. Ahmad has no expository scenes, leaving the profoundly expressive lines on his face to communicate deep volumes about his personal history. As a skillfully maneuvered, minimalist meditation on the moods and methods of Ahmad’s morosely mundane experiences, The Winds That Scatter adopts a patiently observant perspective that exudes a tremendous level of realism, yet also possesses a lyrically spiritual poeticism. It is not without purpose that the interstitial footage – Atari games, swarms of gnats, a snake hunting a mouse, and a cow – features the most blatantly metaphoric comments on Ahmad’s existential state; these images omnipotently (and passively) comment upon his position in life, presumably not unlike Ahmad’s Allah. The Winds That Scatter not only offers a different, humanistic portrait of a non-threatening, post-9/11 Muslim, but it also comments upon the practically inherent, naive human faith in god – any god.

In casting Ahmad Chahrour, Bell hit a proverbial goldmine of actorly riches; but not only does Bell deserve credit for this casting decision, he also deserves kudos for providing us with such an honest prospective of an abundantly plain, Muslim man. All the while, Bell forges intelligent comments about the impoverished economic state of rural America. Sure, Ahmad’s ethnicity and citizenship limit his employment opportunities, but The Winds That Scatter reflects more than just the Muslim immigrant experience. Sadly, this is a story of modern day working class existence in the United States.

Day One of the Julien Dubuque International Film Fest