THE LOVERS AND THE DESPOT

(The 2016 Sundance Film Festival is in full swing and we have boots on the ground as well as eyes on screener links for the whole festival! Stay tuned to hammer to Nail as reviews start rolling in…)

What we know about North Korea is only what North Korea wants us to know. The mysterious nation feeds the world images and legends that at times feel absurd and others absolutely terrifying. It is a self perpetuating image machine whose thin facades are methodically being cracked away at, mainly through the realm of documentary film (see also Under the Sun).

The Lovers and the Despot begins as a standard love story following the star crossed fates of South Korean actress Choi Eun-hee and director Shin Sang-ok. Their young director/actress love affair plays out on cue; passion, adopted children, turmoil, mistress, divorce. But soon after their separation they are re-united by the strangest director of them all- Kim Jong-il- turning their relationship, and the film, into an exploration of the North Korean propaganda industry. 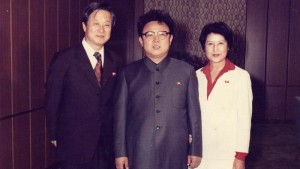 The archival imagery of the film is manipulated with actual style. Movement, color, framing, deliberate cropping are minutely controlled with a beauty and intelligence rare in the world of non-fiction. Drawing from a plethora of media, the audience tries to decipher the montage on screen; is this a fiction film clip from a South Korean blockbuster, vintage news footage from verified journalists, a dramatization of actual events on grainy 16mm, or pure North Korean propaganda? The film moves seamlessly between these modes until the lines are beyond blurred. It is also packed with interviews, most notably Choi Eun-hee’s own onscreen storytelling delivered with a poise and stern eloquence that often feels scripted. The blending of fictions and truths begin to move away from simple story and tell a much larger narrative on the dictatorial power of media.

Whether the agenda is as innocuous as entertainment or as troubled as oppressive political ideology, movies are a catalyst for reactions. In an increasingly mediated world the real and fake are becoming a blob of conflicts and confusions, how does one know how to be when the truth feels more and more indecipherable? The Lovers and the Despot appeals to our want of action packed adventure filled with spies and getaways, deceit and love. But it also reminds that structures of belief hinge upon media and it is how we react to that media that shapes the global conversation; following and liking is not always enough.