Boy, oh boy, what a super-fun year this one turned out to be! Though the SXSW Film Festival has so many dreamy non-film related things inextricably linked to it that make it unfair for other fests to compete—immaculate spring weather, tasty food trucks, beer for breakfast, March Madness, etc.—it’s not as simple as that. To wit: the 2010 event, when it felt like theaters had reached capacity before lines had even begun to form. Everyone I know was worried heading into this year’s fest, but apparently Janet Pierson, Jarod Neece, and the entire SXSW team were worried too, as they came up with hard, concrete solutions for this problem. I personally had no trouble getting into any films this year (though I was a good boy and lined up way ahead of time to nip that problem-o in the bud-o), and I was impressed and pleased with the smoothness of operations everywhere I went. It was clear from the first day of the festival that the SXSW team had taken the complaints and suggestions to heart and had worked hard to fix things. Fix them they did.

While I could talk about so many great memories from my week in Austin—the first annual Michael Tully Invitational ping-pong tournament (congrats to Munaf Rayani for taking home the prize), experiencing SXSW for the first time with my oh-so-very-special-someone, watching my own movie while drinking a pitcher of beer at the Alamo, seeing Rick Fox emerging from the interactive side of the Convention Center, getting Matt Singer’s autograph—I’d rather concentrate on the films themselves. With the overwhelming barrage of branding and advertising and partying and everything else going on in downtown Austin, it’s sometimes easy to forget why we were there in the first place. But the fact remains that we put in all this work and make the annual trek to Texas because of cinema, and that’s what I’m here to write about. (For the record, while there were very good-to-okay things to be found in almost everything that I saw in Austin, I’m going to remain as positive as possible here and concentrate on the work that excited me the most. Remember kiddies, this sh*t is s-u-b-j-e-c-t-i-v-e.) 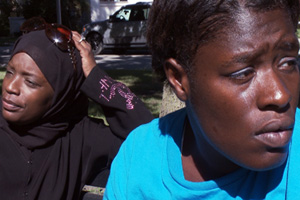 The Interrupters — Steve James has done it again, proving that whether working on an epic scale (Hoop Dreams) or a more directly personal one (No Crossover: The Trial of Allen Iverson), he is, without question, a master of the documentary form. Though it runs two hours and 42 minutes, The Interrupters doesn’t feel “long.” This one-year chronicle of Chicago’s devoted CeaseFire “violence interrupters” crusaders, who risk life and limb by inserting themselves directly into personal conflicts in order to stop violent retaliations from happening, is as sobering, devastating, and heartcrushing as it is inspiring, uplifting, and heartwarming (try accomplishing both of those feats at the same, rookies). Not much else needs to be said at the moment—I’ll save that for my full review—other than this was easily my most rewarding experience in a theater at SXSW this year and that if the opportunity presents itself, you don’t have any excuses. Everyone must see The Interrupters. 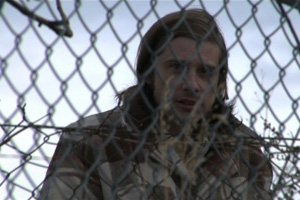 Bad Fever — It’s a good sign when my biggest gripe with a movie is that it wasn’t shot on celluloid. That’s a lame issue to have, perhaps, but in this case I find it a hard feeling to shake because everything about Dustin Guy Defa’s Bad Fever is not just seeped in the 1970s character-based realism that I so deeply love; more importantly, there’s the nagging hunch that if its production value and look had distinguished itself from so many of the other modern micro-budget films at this year’s festival, then Bad Fever might have really stood out. While Eleonore Hendricks has already proven herself to be one of indie cinema’s most assured and dependable actresses, it’s filmmaker Kentucker Audley who is the true revelation here. This is unequivocally a real performance by a real actor, who displays a commitment to his character that should be awarded in some fashion during awards season next year. It would have been so easy for Bad Fever to fall short of its mark, but by the time Audley’s Eddie crashes and burns at a stand-up open mic night and is forced to confront the reality of his less-than-successful life, it reaches a new state of uncomfortable, piercing sadness.

The Ballad of Genesis & Lady Jaye — [Two full disclosures: 1) I was unfamiliar with the subject of this film before sitting down to watch it; and 2) This movie was edited by Marc Vives, who also edited my movie.] Shot on a Bolex and presented with the intimacy of a personal, nostalgic love letter, Marie Losier’s experimental portrait of Genesis P-Orridge (the legendary underground musician responsible for Throbbing Gristle and Psychic TV) and his subsequent love affair with Lady Jaye turned out to be my most unexpected delight of the festival. To fully explore his love and devotion, Genesis feminized his external self in order to create a “Pandrogynous” bond with Lady Jaye that brought the two of them even closer together. You don’t have to be a fan of their music (see: disclosure #1) to be touched by this film.

The Strange Ones — I didn’t get to see Lauren Wolkstein and Christopher Radcliffe’s very excellent short film at Sundance, where it world premiered, but I can see why it’s making the festival rounds. An eerie and unsettling short story brought to life, The Strange Ones is a great example of what short films can, and should, do—i.e., they create fully realized, emotionally satisfying worlds that both provide insight into, and make us question, the human condition. Based on this and Cigarette Candy, it’s clear that Wolkstein has the skills to succeed as a director of features, but part of me wants her to produce a few more shorts like this one to remind short filmmakers how it’s done.

Surrogate Valentine — After White On Rice, Dave Boyle has delivered a film that might be drained of a color palette but that remains flooded with humor and charm. Superficially, that color drain—as well as the refreshingly matter-of-fact depiction of non-white-Americans in an Amer-indie picture—might call to mind Barry Jenkins’s Medicine For Melancholy, but to harp on that would do a disservice to both films, as they are ultimately doing very different things. Surrogate Valentine is a bittersweet comedy about a struggling musician (played by actual musician Goh Nakamura) who is equal parts talented, insecure, and confused. (Read Nelson Kim’s full HTN review for sharper, more detailed insight into the movie.) 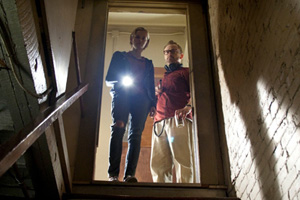 The Innkeepers — It’s virtually impossible not to compare Ti West’s follow-up to The House of The Devil—particularly if you found that film to be as masterfully executed as yours truly did—but in this case, I was able to check my expectations at the door and appreciate West’s latest as the fun ride that it is. At 100 minutes, West certainly pushes the boundaries of how many slowwww walkssss downnnnn hallwayssss weeee neeedddd tooooo geetttt theeeee pointtttt acrosssss, and many less patient viewers will undoubtedly check out. But what I find to be so exhilarating about an effort like this is how West updates the old-school haunted house movie for the modern generation—both Pat Healy and Sara Paxton are great at conveying the soul-sucking, time-numbing burden of service jobs like these. He also infuses the film with a genuine sense of humor. West’s recent films are in many ways intellectual filmmaking exercises, but his command of the craft and childlike enthusiasm for the visceral thrills inherent in his genre of choice help them to succeed as popcorn entertainment. 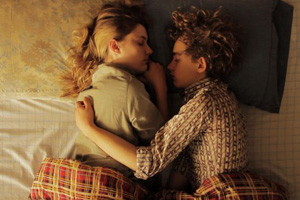 The Dish & The Spoon — Perhaps it’s the fact that director Alison Bagnall is credited as a co-writer on Alison Maclean’s Jesus’ Son that has me wanting to call this movie Tweesus’ Son, but there is some sort of spiritual kinship between the two. The Dish & The Spoon stars Greta Gerwig in her most abrasive role yet (or maybe Yeast still takes that crown) as a bereaved wife on an emotional bender. While fleeing home for reasons we don’t fully glean, Rose stumbles into a relationship with a young British boy who proves to be a perfect whipping stick for her frustration and fury (Olly Alexander, exuding a charm akin to a young Bud Court or Noah Taylor). In an off-season Delaware beach town, Rose grapples with her emotions and proceeds to take advantage of her newfound companion in increasingly strange ways. The Dish & The Spoon is a strong statement by a female director and actress who are grappling with serious issues—even as the film floats along like a foggy, barely remembered dream.

Umshini Wam — If the names Harmony Korine and Die Antwoord mean anything to you, chances are you’ll dig the pants off their 16-minute short film collaboration, which world premiered at this year’s fest (in a short program with: see directly below). I had a good time visiting the strange universe that Korine presents, but like Die Antwoord as a musical act, I don’t necessarily feel this type of thing in my bones (as opposed to my across-the-board love for Mister Lonely and Trash Humpers). That said, Korine’s film is lovely to look at—thanks to Silent Light cinematographer Alexis Zabe and those vintage anamorphic Lomo lenses—and DJ Hi-Tek’s score is undeniably thumping. “I’m old enough to bleed, I’m old enough to breed, I’m old enough to crack a brick in your teeth while you sleep.” Yes you are, Yo Landi. (***WATCH IT ONLINE NOW AT VBS.TV***)

Night Fishing — I’m pretty much over filmmakers who brag about shooting their films on cell phones or other lower-grade technology, but when it was announced at the very beginning of Park Chan-wook and Park Chan-kyong’s Night Fishing that their 33-minute short was shot on an iPhone 4, I perked up. Leave it to one of world cinema’s most assured visionaries to show everyone how it’s done. A haunting story of life, death, and the transference of spirits from one body to another, Night Fishing is a visually audacious effort that builds to an unexpectedly emotional climax makes you forget all about the camera with which it was shot.

Five Time Champion — I personally had a blast watching Berndt Mader’s feature-length debut, which had the air of a 1980s made-for-TV movie (yes, I mean that as a compliment). A coming-of-age tale shot on celluloid, Five Time Champion certainly feels familiar, but within its formulaic structure, there are many treats to be found—specifically with regard to the performances.

Did Not See But Very Desperately Want To

8
Attack The Block
Chainsaw Found Jesus
The FP
How To Die In Oregon
Kill List
Last Days Here
No Matter What
Our Day Will Come
Page One: Inside The New York Times
Sound of My Voice
Where Soldiers Come From
Wuss
(and many, many more, of course, but these will have to suffice for now)