“I could see this being the next Park City a few years down the line,” one filmmaker said to me about halfway through the 2014 Sun Valley Film Festival. “Both festivals even have the same first syllable.” It’s ostensibly an easy comparison to agree with: Sun Valley, Idaho is a gorgeous, relatively isolated town that’s eternally ready for an influx of skiers making the short trip from LA, but it remains to be seen whether or not the Gem State resort town itself would actually agree—or even welcome—that assessment. For one thing, the streets of Sun Valley and the nearby town of Ketchum are blissfully uncongested. You can get from one of the four theaters to pretty much anywhere else on foot or by bike in less than 15 minutes. In its third year, SVFF seems more eager to become a hallmark of local cinema, and a major stepping-stone for Idaho to become a hub of film production and arts culture, than an exhibition for the same international independent filmmakers who already flock to show their work at Sundance, SXSW, and the like.

It’s a cause that’s impossible not to be sympathetic to as the area surrounding Sun Valley (once committed to film in Clint Eastwood’s Pale Rider) is one of the most blatantly cinematic I’ve ever seen. It would be a filmmaker’s dream to take advantage of the surrounding snow-peaked mountains and canvassing stretches of northwestern brush. A few of the local films on the slate do just that: Matt Larson’s 35mm music video Run, whose DP, Zach Spiger, picked up the Focus Award for Best Cinematography, made use of the area’s startlingly widescreen vistas to pretty awe-inspiring effect.

Of course, this method of programming is intrinsically related to the amount of films actually being produced in Idaho, and therefore results in showing of an eclectic grab-bag of films with Idaho connections both subtle and “on-location” obvious, as well as the usual completely unrelated films that have been traversing the festival circuit. Programming director Laura Mehlhaff rounds out the festival with just as many special events and panels as feature films, including an impressively unique “work in progress” screening series where audience members give feedback to both short and feature filmmakers, and coffee talks with notable local screen presences like actress Mariel Hemingway (not a single question about Woody Allen was asked, which is kind of adorably charming in itself).

Some highlights from the four days: 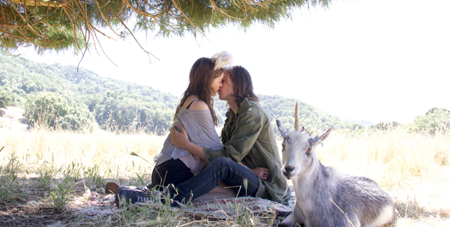 I Believe in Unicorns (Leah Meyerhoff, 80m) — Meyerhoff’s debut feature was recently retitled to just Unicorns, though I don’t see the change affecting its commercial prospects. This is a film that has already resigned itself to being boldly divisive. Meyerhoff manages to get a stunning performance out of her teenage newcomer lead, Natalia Dyer—a sixteen-year-old dead ringer for Kate Lyn Sheil with a formidable screen presence all her own—a smart, frustrated, and naïve young girl who falls crushingly, dangerously in love with a much older skater punk (Peter Vack), with whom she runs away from her hometown and the responsibility of caring for her ailing mother. Already small, Dyer seems to shrink and shrivel in hopelessness as the film descends into some pretty stomach-churning depths. Unicorns manages to distinguish itself from Eliza Hittman’s It Felt Like Love and other recent cautionary tales about young women and sexuality by adopting a faux-sickly sweet ebullience, like a perverted Michel Gondry. Dyer’s youthful imagination and naïveté are portrayed with intricate stop-motion scenes (including the titular unicorns), 8mm daydreams, and bright colors, rendering the film a rattlesnake with pastel stripes. Even if you’re not totally down with the fake-twee trappings and queasy undercurrents of underage sex, the film is too alive and wild to easily dismiss. Meyerhoff clearly has an incomparable visual imagination and I can’t wait to enter it again. 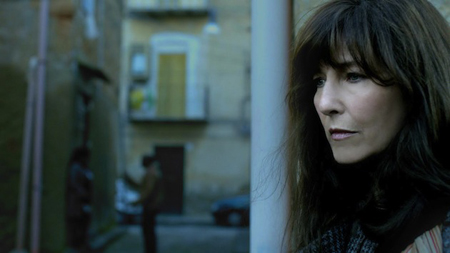 War Story (Mark Jackson, 88m) — After two features (the other being the fantastic Without), the most striking recurrent element of Mark Jackson’s films is his ability to convey everything about an isolated character by simply showing them naturally in a specific moment, without dialogue. We receive enigmatic, but clearly meaningful, puzzle pieces of who Lee (Catherine Keener)—a war photographer alone on the streets of Sicily—is by observing her rearranging her hotel room, spying on the hotel’s other residents, or watching and photographing strangers on the street from a safe distance. More here than in his first feature, these clues add up to a distinct narrative, but it proves itself to be a narrative that’s challenging, often chilling, and incredibly perceptive. I was reminded of the searing experience of seeing Cristian Mungiu’s 4 Months, 3 Weeks, and 2 Days for the first time.

Numerous features at the festival already have distribution, and a couple are just days from being released, though they still warrant a mention. I had missed Daniel Patrick Carbone’s Hide Your Smiling Faces at Tribeca last year, and was glad to get another shot at it. While clearly indebted to the David Gordon Green school of “young kids over their heads in rural America” filmmaking, Faces manages to remain distinct by relishing in silences, shadows, and unmoving frames. It will be released in New York on March 28th and is worth a look. Jeremy Saulnier’s Blue Ruin will be released on April 25th by RADIUS-TWC, so while it’s not exactly an indie movie in need, I still certainly don’t mind promoting it for the simple fact that there aren’t nearly enough American low-budget genre films with this much ingenuity and wit. It’s gory, perfectly pitched and controlled, and an incredible amount of fun. Saulnier is the much-needed American answer to the mordant comedy mastery of Ben Wheatley.

The real highlight of the festival was perhaps its most unsung: the shorts program. A total of 32 shorts were aired throughout the run of the festival, with most of the filmmakers present. As diverse and varying a slate as I’ve ever seen, it was especially exciting as the majority of the films were either world premieres, or from young, first-time filmmakers, or both. 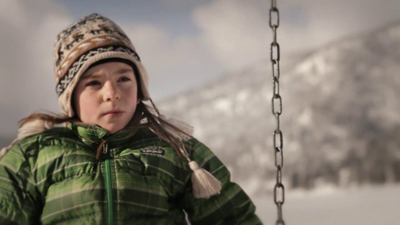 Circle to the Left (Katie Meade, 17m) — Meade’s Circle to the Left is a gem, and the sort of discovery that makes shorts blocks worth attending. A world premiere from a first-time director, Circle is a wonderfully unvarnished film that clearly and distinctively marks the arrival of a confident filmmaking talent. Following an elementary school student in rural Montana during the last few days before Christmas, there’s definitely a version of Circle that could’ve been overtly cloying and cute (the title is a reference to a square dancing class where the girl discovers something like a first crush). Meade avoids manipulation and clichés by keeping everything natural—I’m a fan of any film that realizes that children are naturally the best performers when they’re allowed to improvise—and filming everything in dreamily edited extreme close ups. Fans of Nicolas Filibert’s Etre et Avoir will swoon.

Without Fire (Eliza McNitt, 20m) — Another world premiere, and another film that could’ve easily been manipulative in less sure and intelligent hands, McNitt’s Without Fire is a tense and engaging portrait of a Navajo mother and daughter preparing for an oncoming storm. It’s anchored by a strong performance by Frozen River’s Misty Upham and an intuitive sense of the best way to shoot and edit to keep the audience perpetually on edge. 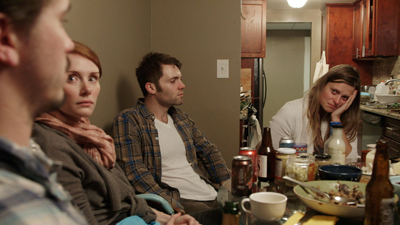 The Lion’s Mouth Opens (Lucy Walker, 16m) — Documentarian Lucy Walker (The Crash Reel, Waste Land) is something of a master at taking sensational topics and making them thrilling through the sheer prowess of her filmmaking as opposed to leaning heavily on the topic as a crutch. There’s no maudlin music or teary-eyed talking head testimonials in Lion’s Mouth, a film that follows actress Marianna Palka in the days immediately before and after she is to learn her Huntington’s diagnosis. There’s also no shred of vanity in shots where her friends (including Jason Ritter and Bryce Dallas Howard) worry fearfully behind her back. A master class in nonfiction suspense, The Lion’s Mouth Opens would be noteworthy for the extreme emotional response that it garnered from the audience that I saw it with. Luckliy, that response was well earned.

Atrium (David Paige, 13m) — Director David Paige deals in confusion and misdirection for the first twelve minutes of Atrium and handles these elements well. The easiest point of comparison is Upstream Color in its heightened trippiness and that it follows a woman haunted by a mysterious something. When the big twist comes, it reveals a sci-fi premise that’s somehow more startling and disturbing than if these details had been left vague.

The attendees, filmmakers and press at Sun Valley were all rewarded with the same intimate, communal feeling of being part of a festival that’s still in its nascent stages. I managed to meet and personally get to know nearly every filmmaker present, and every party or afternoon at the VIP lounge revealed multiple shorts filmmakers meeting for the first time and plotting to work together in the future. Shorts filmmakers take note: this festival is hungry for programming, and the social circumstances it presents to you in return are becoming more and more one-of-a-kind. 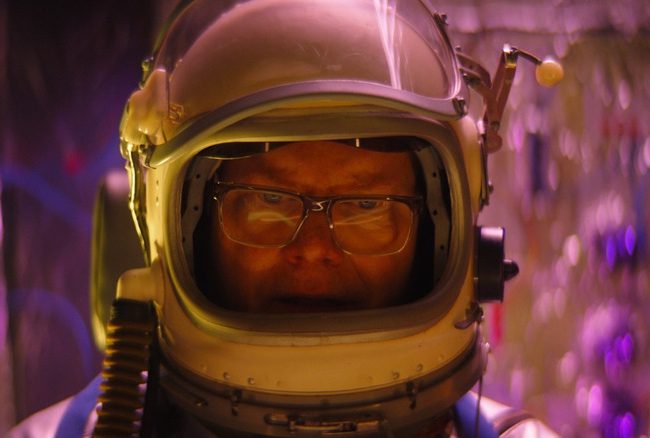