Based on past, admittedly limited, experience, the idea of the International Film Festival Rotterdam taking its complete Tiger Awards competition on the road is maybe not the best one. That’s because the Tigers only consist of the earliest features (first and second) of upstart directors from all over the globe. When you take into account the fact that more than a dozen films are included each year, this makes for an unavoidably imbalanced ratio between the very good to the middling to the much more painful than that. In doing a casual survey of those who are familiar with the IFFR and the Tiger Awards competition, the most generous number I’ve heard when it came to keepers from each year’s competition was a dubious three. While teaming up with BAM to present the complete 2010 Tiger Awards competition in America—aka, Rotterdam@BAM—is a fresh, groundbreaking concept, if most of the films on display sucked, this wouldn’t just be bad for Rotterdam and BAM, it would unintentionally further marginalize exceptional foreign, independent, festival films from American audiences.

Having said that, I am happy to report that 2010’s Tiger Awards competition features so many standouts that I would hold it up alongside the far more illustrious and comprehensive New Directors/New Films program. While I’ve only seen twelve of the fifteen films from this year’s slate, some of which were, in fact, the type of pretentious stinkers that give foreign films, and film festivals in general, a bad name, I am also shocked at how much strong work I encountered. Here, in order of personal preference, are my must-sees from this year’s Rotterdam@BAM series (in some cases, I’ve tweaked/updated the capsules from my IFFR wrap-up): 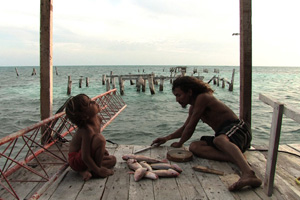 Alamar (To the Sea) (Pedro Gonzalez-Rubio, Mexico, 2009) — Alamar is a breathtaking little gem of a movie that is executed with such seeming effortlessness, I was fully convinced I was watching a documentary the whole way through. While it might be lazy—and not entirely accurate—to call it Malickian, Gonzalez-Rubio shows a similar reverence for nature that isn’t overly simplistic and hippified. This touching story of a young boy and his father spending time in Mexico’s Banco Chinchorro coral reef, fishing and existing meal-to-meal, day-to-day, with their father/grandfather, before the child leaves his father behind once and for all to go live with his mother in Italy, is a pleasant reminder that industrialization hasn’t steamrolled its way into every corner of the world (not yet, at least). And when it’s time for the little one to leave that paradise behind, Gonzalez-Rubio doesn’t provide an obnoxiously loud contrast between the sea and the city. Back on land, in this more developed Italian setting, the beautiful memories of that quiet life linger. To paraphrase my smarter-than-I girlfriend, Alamar isn’t just a profoundly touching metaphor for parenthood in general; it’s like watching a father’s gorgeous dream in which he basks fully in the love of his child. It would have to be a seriously triumphant year if, at the end of 2010, Alamar doesn’t make my overall Top 10 list. (SCREENING: THURSDAY, MARCH 4, 9:15PM) 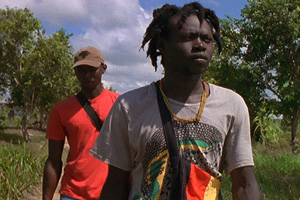 Let Each One Go Where He May (Ben Russell, USA, 2009) — If someone asks you to describe what the Tiger Awards competition is about, Ben Russell’s film would be a great place to start. Tell them that the only American selection in 2010 was directed by an experimental artist and that it consists of thirteen 10-minute one-takes shot on 16mm. I saw Let Each One Go Where He May on my last night in Rotterdam at 10pm. Groggy before even sitting down to watch it, I was worried that my already heavy eyelids wouldn’t be able to stay separated for the film’s duration. Yet as soon as it began, I perked fully awake and stayed riveted throughout. Shot in Suriname, Let Each One Go Where He May follows two brothers who take a similar geographic journey to the one their ancestors took when they were fleeing Dutch slave-traders over 300 years prior. Russell’s bold film is a glorious blend of Munyurangabo and Gerry, in which each unbroken take builds in drama and tension the longer it transpires (there are some glitches along the way, but these feel more like documentary accidents as opposed to fiction mistakes). Winner of the FIPRESCI prize, Let Each One Go Where He May is certainly not for everyone, but in contrast to the more traditional narrative work on display in major film festival award competitions, it provides a rejuvenating, major thrill. (SCREENING: SUNDAY, MARCH 7, 2PM) 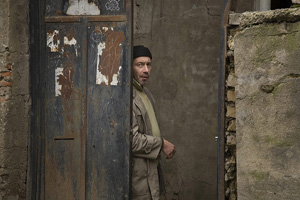 Street Days (Quchis dgeebi) (Levan Koguashvili, Georgia, 2010) — It might be sacrilegious to say that I like Koguashvili’s Street Days even more than Corneliu Porumboiu’s Police, Adjective, but the further away I get from it, the more that feeling sticks. The similarities between the two films are virtually impossible to ignore, as Koguashvili’s deadpan drama is set in small Georgian town (yes, I know Georgia is not Romania) in which boredom leads the police into staging an inappropriately false drug bust. In Street Days, however, the character of Chekie (a phenomenal Guga Kotetishvili) stands for more than just this particular down-on-his-luck individual. Chekie represents so many of his fellow countrymen, who are born into a despondent life that they won’t ever be able to transcend or escape. Koguashvili sets a humorous tone—exhibiting an exceptional talent for choreography within the frame along the way—but he concludes on a somber note that brings his point home more conclusively. For those of you who appreciated Police, Adjective but felt there was a way to convey repetition less literally, Street Days accomplishes this same agenda at a much brisker pace, without sacrificing any intellectual weight. (SCREENING: MONDAY, MARCH 8, 8:45PM) 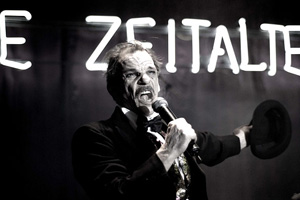 The Temptation of St. Tony (Puha Tonu kiusamine) (Veiko Ounpuu, Estonia, 2009) — Wow. If Bela Tarr watched a double-bill of Dead Man and Lost Highway and went to sleep, this is what his dream might look like. Ounpuu opens with a quote from Dante’s Divine Comedy, and he goes on to update that story to reflect modern Eastern Europe life at its most comically grotesque. Tony (Taavi Eelmaa, looking oddly like Reggie Miller if Reggie Miller had hair) is a successful everyman who begins to lose a grip on his life when a series of freak events occur. This is another case where personal taste buds will determine one’s tolerance for the bizarre antics on display, but to know that movies like this are still getting funded and are still being made is a wondrous thought indeed. Having not yet seen Oonpuu’s first feature, Autumn Ball, I’m now determined to track it down. More than that, I’m anxious to see what he comes up with next. (SCREENING: FRIDAY, MARCH 5, 9:15PM) 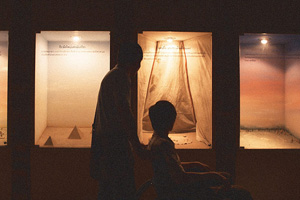 Mundane History (Jao nok krajok) (Anocha Suwichakornpong, Thailand, 2009) — Come to think of it, this Tiger Awards program is filled with work that will appeal to certain temperaments and rub others the very wrong way. Fortunately, the work of Apichatpong Weerasethakul makes me swoon, and I would place Suwichakornpong’s Mundane History firmly in the Weerasethakul camp. That said, since I only know Thai cinema through Weerasethakul’s films, I’m not sure if I’m being lazy at best, and racist at worst, in making this comparison. Anyone? Or would Suwichakornpong acknowledge this influence and appreciate the compliment? Whatever the case, Mundane History unfolds at a sleepy pace, as an injured young man returns home to be looked after by a male nurse. Suwichakornpong repeats scenes and situations to add a drugged up dreaminess to the proceedings (to further place us inside this patient’s head?), but she also injects a few moments that burst forth with an otherworldly, immediate power, jolting viewers awake in the process. (SCREENING: SATURDAY, MARCH 6, 6:30PM) 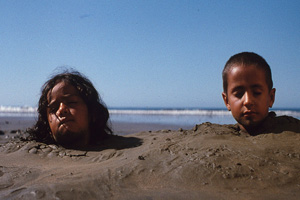 Agua fria de mar (Cold Water of the Sea) (Paz Fabrega, Mexico, 2010) — Fabrega’s feature debut is a quiet mystery of a drama, boasting beautiful CinemaScope cinematography of some genuinely stunning locales. The setting is the Costa Rican coast, where a young couple has traveled to take care of some family business involving land. Their first night there, they encounter a small girl who appears to have run away from an abusive situation at home. The next morning, she’s gone. For the majority of the film, Fabrega crosscuts between the young girl’s life back at home and the mysterious unraveling of the couple’s relationship. But eventually, their paths cross again, and the truth is revealed. Cold Water of the Sea is a quiet achievement, which speaks most strongly when it isn’t speaking at all. I jokingly called it “Lucrecia Martel’s George Washington” when I first saw it, but in a strange way, I think that comparison holds true. It’s no wonder it won a Tiger Award alongside Mundane History and Alamar. (SCREENING: SATURDAY, MARCH 6, 4:15PM) 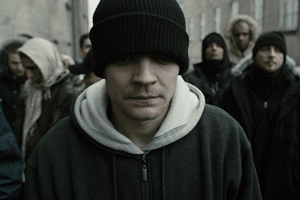 R (Michael Noer and Tobias Lindholm, Denmark, 2010) — Movies always seem to come in twos (Capote and Infamous being the most obvious recent example), but it’s unfortunate for directors Michael Noer and Tobias Lindholm that their doppelanger happens to be Jacques Audiard’s ultra-mighty A Prophet. There are just way too many similarities to not keep feeling a sense of déjà vu throughout, but if one can suppress those annoying urges, R turns out to be an even bleaker depiction of life on the inside. In this case, even though our protagonist rises to the occasion, ultimately his cunning can’t conquer his surroundings. It’s a tough movie. (Note: I can promise that after watching R, you’ll never look at Kinder eggs the same way again.) (SCREENING: SATURDAY, MARCH 6, 9PM) 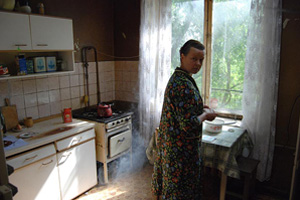 Mama (Nikolay Renard and Yelena Renard, Russia, 2010) — Mama is like the immaculate bastard of Ulrich Seidl and Roy Andersson, which merges Seidl’s Eastern European grime with Andersson’s comic-strip sadness. Nothing much happens in this story about a grotesquely large 40-year-old man who lives at home with his weary mother, and literally nothing is said. But it certainly sets a mood and tone that lingers. If the names Seidl and Andersson get you excited, you should definitely seek out Mama, though don’t set your bar too high. This is more of a distant nephew than an actual sibling. (SCREENING: SUNDAY, MARCH 7, 5:15PM)