Four titles rise up in the opening minutes of Ow (the former, the Japanese title Maru, the English translation “Zero” and finally the kanji) as a group of people become fixated on the ultimate MacGuffin. But that’s getting ahead of the story at hand, following the Suzuki family (father, wife, grandmother and elder brother) that deal with their unemployed son, Tetsuo.

Ow lures the audience in with the promise of a general day in the Suzuki household when Tetsuo’s girlfriend stops by to take him shopping. She jokes with his mother and grandmother before being guilted into bed for a few minutes while the family home is empty. And then “it” arrives.

“It” is never defined and you’ll never know more about “it.” “It” is the perfect MacGuffin, capable of representing everything and capturing the attention of everyone that hilariously looks upon it– a rotating orb that resembles a paper machete planet. Tetsuo’s father, secretly unemployed for a month, comes home to admit this to his son and beg him to get a job. But then, like the policemen soon to join them, he becomes frozen by seeing “it.” When mother and grandmother return, the latter is rendered catatonic by the site of “it” and soon the police arrive. (Spoiler: the same thing happens, hilariously, one-by-one.) Death, as it stands, is announced as clinical and succinct as each family member was introduced down to age and any type of job experience. It’s a clue to how roles are meant to define the seemingly normal family, even if their youngest is unemployed. 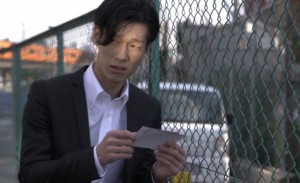 A reporter tries to find “the truth”– constantly being admonished by his senior editor for not understanding a) what that means and b) not being able to have fun with it– as the Suzukis cope. The weird, quirky moment of the intro may as well have never happened afterwards. The father’s habit of listing three reasons why family will work is co-opted by the mother, striving to keep positive, going so far to force the remaining members into a fist-pump punctuated cheer. Much of what the Suzuki family strives to protect is pride over acceptance. While confined to a wheelchair, Tetsuo fantasizes about living in paralyzed co-habitation with his girlfriend while their siblings develop a romance.

Think of Ow as a brutal, droll comedy that goes to an early extreme and then draws back to examine the consequences. None of the Suzuki family seems able to move forward, but they can’t accept the past either. It’s a languid state that atrophies, taking lives and enraging the reporter that no one can explain what happened. Ow also features a surprising reference to a cult Japanese film that may fly over many audiences’ heads.

Rather than using that film’s “special type of love” the referenced film (hint: google “Tetsuo” and “Shinya”) showcases, accepting there are weird things requires dialogue over piercing things with our metaphorical drills.

THE WINDS THAT SCATTER