[Full disclosure: Paul Sbrizzi is an Associate Programmer at the LAFilmFest.]

Here is a small sampler of work that will be screening in shorts blocks and in front of features at the 2012 LAFilmFest:

Humor and science fiction don’t usually mix: the genre is all about earnest suspension of disbelief, and if you’re laughing you’re usually laughing at it. In 3113 Eric Demeusy creates spectacular special effects and fills his frame with gorgeously imaginative mashups of futuristic and antique styles, but he fully gets the absurdity and the silliness: one of his characters is a sort of robot-furby-bunny-rabbit. Demeusy could become an exciting new voice within the genre. [precedes Juan of the Dead]

Victor Hugo Duran’s Fireworks follows a pair of brothers on their quest to find—uh, fireworks for Fourth of July, to impress a couple of girls in their South L.A. neighborhood. It’s a sweet but gritty film, shot in a semi-documentary style that beautifully captures the look and feel, mannerisms, and way of thinking of this corner of latino South-Central. Duran gets great performances, full of adolescent swagger, from his non-professional actors. When in the end they do shoot off the fireworks, it’s like a symbol of the dreams, ideals and loving spirit that burn brightly in the face of hardships in this humble neighborhood. Gets to me every time. [plays in Shorts Program 3] 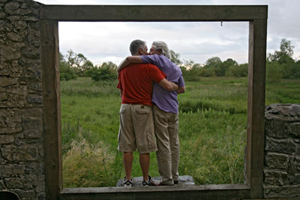 Hold on Tight by Irish director Anna Rodgers examines a core aspect of the experience of being lesbian/gay in the more or less tolerant western world, by hearing out a series of couples and their thoughts and feelings about displaying affection in public. More than just a social-issue movie, it’s about intimacy, sometimes uncomfortably so, capturing its subjects from close range and in shallow focus, in shared moments of tenderness behind closed doors and being openly affectionate, or not, out in public. Rodgers cleverly leaves her characters’ words in voice-over, so we experience them as if we were inside their heads rather than being spoken to. [plays in Shorts Program 4]

Kendo Monogatari by Fabián Suarez illustrates the rich and exotic fantasy lives that unspool in the consciousness of characters leading the simplest of lives. Lesbia is a middle-aged Cuban hairdresser working out of her home; she’s obsessed with the Japanese sword-fighting discipline of Kendo. Her best friend is Mandy, a gay chub determined to emigrate to Florida to be with his boyfriend. Mandy is an archetype—the wise, emotionally exposed fat queen—that’s rarely shown in film with any degree of dignity; Juan Miguel Mas plays him with nuance and fabulousness. Lesbia’s character conveys the idea that a warrior’s most powerful weapons are her generosity and compassion. [precedes The Strawberry Tree]

Life and Freaky Times of Uncle Luke by Miami’s own Lucas Leyva and Jillian Mayer is the kind of movie you think you might have dreamed—a loose reworking of the plot of La Jetée all mixed up with the life story of Luther Campbell from 2 Live Crew. Its arty, day-glo, hilariously low-tech production design is reminiscent of the early-90s Native Tongues Posse hip-hop esthetic; the still shots of La Jetée become large, painted panels with moving body parts poking through—a leg, a head, in one case a whole lotta booty. It’s funny, it’s brainy, it’s street. [plays in Shorts Program 2] 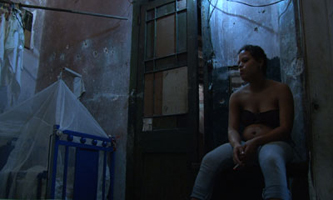 Scanning (Ecografia), shot in Cuba by Polish director Aleksandra Maciuszek about a multi-generational family in a crumbling old house, seems at first like a fairly typical slice-of-life documentary, albeit with a characteristically Eastern European eye for shadowy, organic colors and textures. Then the main subject of the film, a patriarch with dark skin and blindingly white hair, turns the tables on the filmmaker, telling her with the conviction of a holy man what she must do to be happy, and commanding her over and over to include his words in her film. [plays in Shorts Program 1]

Soil is a monochromatic, ink-on-layers-of-glass animation, drawn and scratched with refined brutality by Meejin Hong. Visions of birds flapping and falling from the sky and angry, fighting beasts set the stage for a frightening image of a man and woman locked in a violent clutch. Two faces kissing in a sweet, child-drawing outline soon disappear into the mouth of a hungry animal. This is inspired work, alive and loose and rigorous all at once—a scary vision of nature at its most angry and predatory. [precedes La Camioneta: The Journey of One American School Bus]

In Sacrifice (Qurban) by Anar Abbasov, an Azerbaijani man with three daughters makes a pilgrimage to a holy mountain to sacrifice a sheep so that God will bring him a son. Problem is, in the course of the long trek, he develops a friendship with the animal. With inspired cinematography by Semion Amanatov, Sacrifice uses humor and sensitivity to explore the challenge to its character’s belief system and his evolving consciousness about the importance of his individual will. [plays in Shorts Program 2]