(The SFFILM festival ran April 5-19. Here are some reviews from the always popular film festival.)

The Incredible Jessica James could just as well be called The Incredible Jessica Williams, because it’s basically a feature-length reel for the talents of the effervescent former Daily Show correspondent. Williams has got the dramedy chops and the charisma to sell what would otherwise be a medley of romantic comedy/self-exploration tropes. Netflix picked up this Sundance favorite, written and directed by Jim Strouse expressly for Williams. She played a supporting role in his last film, (the comma defying People Places Things) with such aplomb that he wondered why she hadn’t yet helmed a film.

Jessica James is a mid-twenties playwright living in Brooklyn. The thing about Jessica (both James and Williams) is that she doesn’t do anything half-assed. She boogies her way through the opening credits, celebrating life and immediately luring in the audience with her awesomeness. That’s not to say that she’s devoid of challenges. She struggles with a recent breakup. (Though she initiated the split, she continuously fantasizes about run-ins with her ex [LaKeith Stanfield, TV’s Atlanta] wherein he begs for her to take him back before being abruptly killed in a variety of freak accidents.) She papers her walls with rejection letters from theater companies, paying her bills with a job mentoring kids in the (read with British accent) art of theatre at a non-profit. She desperately wants her students to match her passion for the craft, and she gets a little overbearing when it seems like her favorite kid isn’t trying hard enough. Jessica is lovable but she’s also flawed and complex. That’s just not something you see very often in female-driven comedies.

But, like the eponymous character, Jessica James is a loveable but flawed narrative. Strouse commented in an interview that he wanted to write a script that passed the Bechdel test and his does, but just barely. Jessica’s best friend, Tasha (Master of None’s Noël Wells), is in only a handful of scenes and her character doesn’t get much deeper than being supportive and gay. 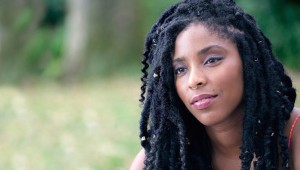 There’s a lot to love, though. Chris O’Dowd (TV’s The IT Crowd) is always a welcome sight and has cornered the market on dopey love interests with a dry wit. In Jessica James, he’s not that different from his character in Bridesmaids. Only here, he’s an app inventor (modern movie shorthand for a man with a bit of money and a lot of time on his hands) named Boone, who is still smarting from a recent divorce. Tasha sets Boone and Jessica up on a blind date, which starts off rather tepid but ends with them making a pact, which requires future communication. In a move that will undoubtedly catch on in the real world, they enact a follow-swap of their exes on Instagram so that they can surreptitiously check in on their former loves without obsessing. Jessica and Boone are in no way smitten, but they enjoy each other’s company enough to fall into bed on occasion. Their most romantic exchange is when Boone tells Jessica he likes her and she responds that of course he does because she’s “freakin’ dope.” Jessica is a confident woman who knows what she wants and isn’t afraid to have a little fun with a guy without fixating on whether or not she’s wasting her best years. She doesn’t consider anything she does a waste of time because she’s just living her best life at every opportunity.

Her confidence is refreshing. For once, we have a female protagonist who not only knows what she wants, but also believes wholeheartedly that she is worthy of it. Strouse is right. Jessica Williams deserves your undivided attention. She is freakin’ dope, and I can’t wait to see what she does next.