A Conversation With Mark Webber & Cast (FLESH AND BLOOD)

I met with actor/writer/director Mark Webber (The End of Love), along with his mother, noted advocate for the poor (and the 2012 vice-presidential candidate of the Green Party) Cheri Lynn Honkala, younger brother Guillermo Santos (a bright teenager with Asperger’s syndrome) and actress Madeline Brewer, on Sunday, March 12, 2017, at SXSW, to discuss his new film, Flesh and Blood (which I also reviewed), loosely based on his own biography. Webber plays Mark, just out of prison, who returns home with the hopes of rebuilding the life he left behind, while confronting demons from his past. A deeply personal movie, it’s also a gripping cinematic experience. Here is a condensed digest of our conversation.

Hammer to Nail: Mark, let’s talk about the motivation for this film. Why did you choose to make a film like this, which features members of your own family playing loosely fictionalized versions of themselves, rather than approach this as a documentary about your family? And how was it different working with them and working with Madeline?

Mark Webber: I tell stories – I make films – in order to express myself and make things that feel real, that people can recognize and connect with, so we can ultimately, in turn, feel a little bit closer to one another as human beings. That’s why I love watching movies, particularly those movies that I really connect with on an emotional level, that send me into a state of reflection on my own life, which make me feel more connected with the world. So I want to make stories that help people feel more connected to one another, which I think is important.

I wanted to make this movie, in particular, because artistic expression, to me, has always been an outlet for me to deal with pain and trauma that I have experienced in my life, and this film is the perfect amalgamation of that whole process. It’s literally taking the whole big pool of pain or trauma that was there from my upbringing and turning it into this artistic process as some form of healing, and fun. It’s really fun. I love making movies and it was really super fun and challenging at the same time to work with my mom and my brother. And the reason why it was so awesome to have Madeline in the movie is because it was a relief…(laughs)…and I say this in the most loving way, because she…makes movies…so she’s aware of the normal process, whereas it was really hard to pin my mom down for rehearsal, ‘cos she had other places that she needed to be that were more important.

HtN: So, Cheri and Guillermo, how did Mark pitch this project to you?

CLH: And even when we were homeless, I got butcher paper and put it up on the wall. We had taken over an abandoned house to live in, while we were homeless, because we didn’t want to freeze to death in Minnesota. So Mark would write things on the butcher board and we would write stories. So writing stories, writing scripts, writing poetry, doing things like that, that’s free. So, the reason I tell you this long story is because this is just a part of that progression, you know. He’s slowly becoming braver, more courageous, and more creative, and becoming an even more amazing artist, to tell the stories he knows he needs to tell. I think that he’s crafting his art so that he’s getting better at telling the reality that’s hard for people to sometimes deal with. It makes for this reality/fictional thing that is easy for people to absorb. Far more fascinating than the Kardashians.

Guillermo Santos: I never got pitched the film. I woke up one day with a camera in my face.

(general laughter all around)

GS: But I think, as it stands, it is definitely an important thing for people to see, because of the realism element that is distorted throughout the entire film. It’s very interesting, from our perspective, because I know at least a chunk of what is real and what is false in the film. Because even with the instances of just my mom and my brother, I was still on the outside of it. But when it came right down to just our moments, there was always the in-between of shooting a scene a hundred times, which results in maybe five seconds on screen, and then having that also be filtered through the camera and then through Mark’s vision of the movie, and then my vision of the actual film, itself, creates an Inception kind of stupidity to it that’s really kind of interesting. Bottom line, I really think the film is pretty revolutionary. I give it a perfect 5 out of 5, except that there was this one weird kid in there who was in there for too long.

(general laughter all around) 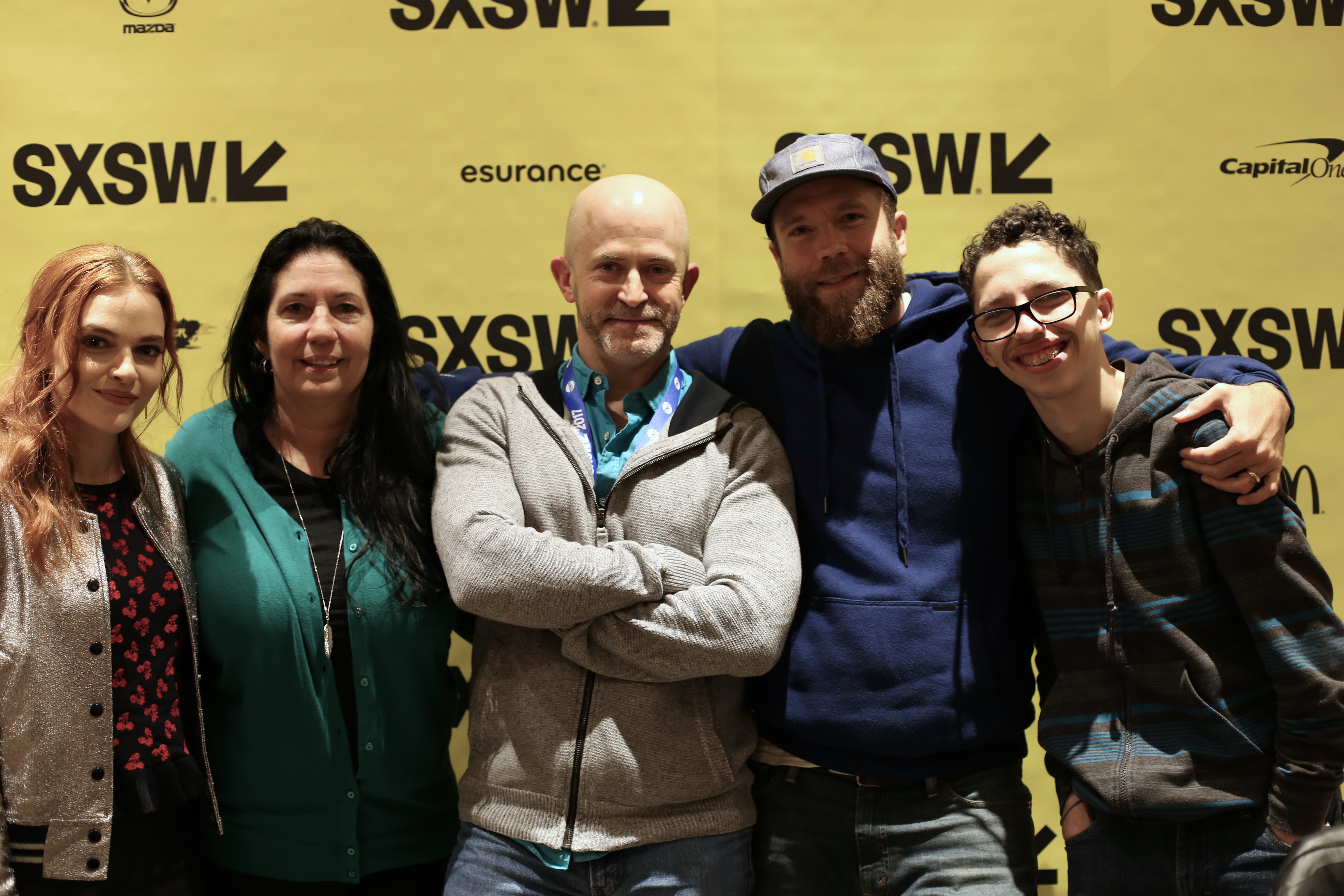 Cast of FLESH AND BLOOD along with our Chris Reed

HtN: I couldn’t agree with you more. Cut him out.

HtN: Maddie, how did Mark pitch the project to you?

Madeline Brewer: I had been told about the project, but Mark and I met at a café, and just kind of talked about what he wanted to do and the story he was trying to tell, and what I would contribute to that. And I just liked the idea of someone making a story that is so true to himself. He’s not trying to be anyone else. He’s like, “I’m just telling this story that is important to me, and I hope it’s important to some other people, and I hope it resonates with some other people.” And that’s just the best part of filmmaking, I think, to just take who you are as a person, and the experiences that you’ve had in your one human experience, and just see who else has had a similar human experience.

HtN: So along those lines, Mark, how did you decide which elements of your life to incorporate directly and which to fictionalize? From what I’ve been able to read, you have not been in prison, for example.

MW: Yeah, I’ve been in jail. I’ve never been in prison, but some people very close to me have, including my friend Charles, who is briefly in the film. That’s the only real thing that is really, truly fictionalized in the entire film. If I want to get real heady about it, it’s metaphorically a good launching point for me, just playing with imprisonment and what that looks like, how that shows up in my life now. Not literally being in prison, but there are other forms of how we can be imprisoned.

It seemed like an appropriate set-up, based off the reality of a lot of men, in particular men of color in my life, who have been locked up for just trying to provide for their family and neighborhood when there are no other options. And to do that justice, it’s just a great set-up to be able to investigate my life, to be returning home, to be forced to have to live on my brother’s floor. And then, from that point, everything else is real, essentially.

HtN: And it also gives the film, dramatically, a narrative arc. You mention the metaphor that it represents. It’s an interesting decision, and it certainly works. I was just curious what else might be fictionalized. But that’s really it?

MW: Yeah. And you know Anton – the character of Anton – and what he represents, this pull of returning to an older way of life. But that’s really my brother’s father. And later, that’s really my father. Their stories are real. They’re both dying, they both were junkies.

HtN: The character played by Maddie is, I assume, based on a real person? Or is that also fictionalized? And if the latter, did you ever consider having that actual person play that part, rather than hiring an actress?

MW: Maddie’s character is the perfect embodiment of many other past relationships and various other histories that I’ve had. Obviously, I’m a father now. I have three kids. And this movie is very much about parenting, and parents not showing up, fathers not showing up. So I have a slight…it’s not an obsession, but on a day-to-day basis, what I am, first and foremost, is a dad. And so, having a character with a child, and not being able to have a child with this person, whom maybe I should have had a child with, is a great launching point to touch on certain emotional beats.

HtN: Sure. Guillermo, your character in the film is making a documentary, within the movie, as a school project. Do you have any interest, yourself, in filmmaking?

GS: Oh, undoubtedly. I’ve always used films as a sort of crutch, because of my disability. Movies taught me basic social things that other people just got from the get-go. And so, undoubtedly, I would like to create my own film, I just fear that now I’m a child star, and it’s just going to get worse…

MW: I’ve ruined it for him! I’ve made him a child star!

HtN: The question is, will you be an Anne Hathaway or a Lindsay Lohan? Because it can work out!

HtN: So I just want to say thank you so much! Really enjoyed the film. Congratulations.