What can one say about a film as perfect as Claire in Motion? With a script that subtly explores the realm of emotional conflict, and powerful performances from its ensemble of actors, the movie is a gentle tour-de-force about trauma and healing, where the rugged Appalachian landscapes of the location mirror the fractured psychological terrain inhabited by its characters. The terrific cast includes Betsy Brandt (Marie on Breaking Bad), Anna Margaret Hollyman (Small, Beautifully Moving Parts) and newcomer Zev Haworth, all expertly directed by Annie Howell and Lisa Robinson (whose previous collaborative feature was Small, Beautifully Moving Parts), who also wrote the screenplay. One emerges after its brief 80 minutes as if from an intense, cathartic dream, haunted and challenged by its raw truths, perhaps, but made all the stronger for them.

When the film begins, our title character, Claire (Brandt) – a math professor at Ohio University – lies drowsily in bed as her husband Paul (Chris Beetem, Emelie) gets up to set out on what we will soon learn is an occasional ritual: a bare-bones multi-day solo survivalist expedition in the local mountains. He’s an ornithologist, and a professor, as well. They have a young school-age son, Connor (Haworth), who keeps mom company while dad is away. Theirs seems a comfortable marriage, unencumbered by drama. Until, that is, Paul fails to return. Over the next month, the police find his car, but nothing else. Has he died? Fled? Claire refuses to believe in either possibility. Soon, however, she discovers that Paul had been working on an art project with an MFA student, Allison (Hollyman), at the university, and while it’s unclear what the exact nature of that relationship was, it’s most definitely clear that there was much of his inner life that Paul kept from Claire. And maybe she liked it that way. 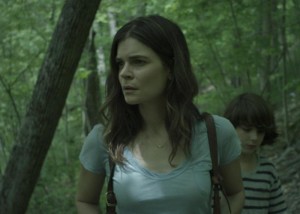 In Claire in Motion, Howell and Robinson examine the nature of human connection and communication, the why and how of what we tell (or don’t) our closest companions. For anyone who has ever been emotionally intimate with anyone, the film – though uniquely its own story – offers a universally accessible narrative of the mysteries of the heart and mind. Brandt is a revelation, accessing a range of emotion that shows us Claire’s ever-evolving state. Haworth is precocious without being precious. Hollyworth, in an unsympathetic role, brings levels of nuance to her character that make us understand her, even if we don’t like her. The whole is stunningly shot, by cinematographer Andreas Burgess (Beautiful Girl), in Athens, Ohio, and its environs. What impresses almost as much as the great acting is the attention to detail – part of their precise mise-en-scène – that Howell and Robinson bring to every scene. Their compositions are as rich and complex as the passions that roil beneath the surface of Claire’s carefully composed exterior. To be seen at all costs.