Although new to being the Producing Director of Sundance Film Festival, Gina Duncan has a wealth of knowledge from her past roles in arthouse and festival work which she shared on day 3 of FIlmEx, the Film Festival Alliance’s virtual conference.

While we focus on big changes, big traumas, big issues, Duncan notes that change, being an essential part of the industry, is not something that has to be big at all times.

“Sometimes change doesn’t have to be a big strategic plan, just an idea,” Duncan said.

While Duncan appreciates the pivots being made and technology to keep us connected, not being in the same space as an audience is hard.

“I can’t see this audience…It is hard to program virtually. It’s not the same,” Duncan said. “I want to be in that space with them.”

A sentiment echoed throughout day 3’s panels. Staying connected and finding more about our humanity was touched upon repeatedly throughout the day.

“In terms of the future, I do feel hopeful because that will never go away,” Duncan said. “That is a part of who we are as humans. Being together and creating a safe space for folks to come together and to share in film and art. It may look different and I am completely fine with that as we needed the change.”

Echoing discussions held over the past few years at festivals, conferences, and talks in the industry, pre-pandemic, change was needed in how the independent film industry works. What the answers are though, the over 700 registrants grappled with so far this week.

“Pre-pandemic we needed to change, and this is giving us that opportunity,” Duncan said. “This is the opportunity to build a new foundation.”

Without sharing specifics, Duncan said post-festival she will look to see how to better collaborate, how to help the future of the industry. 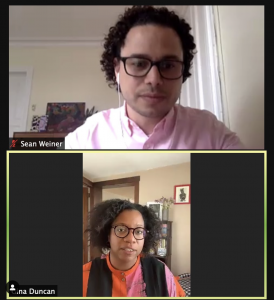 “It can’t be built on the same foundation we were on before,” Duncan said. “We are looking internally to see where our issues are, where we need to strengthen, and where we need to pivot away from.

But for so many institutions who hold on to this is how we got here – because we did x, y, z – what got you to here is not what is going to get you to the next bit.”

She shared she is excited about the new Sundance team and what the pivot means for the larger institutions and if they need to make more space and leverage resources and their power to support the new spaces and programmers.

She called upon the festival and art-house organizers to think differently about the work, find new spaces and ways to collaborate.

“I see a lack of organizing but there are seeds (like FFA), that are being planted,” Duncan said. “But there is no return. There is no going back to the way we were before.”

This transitional time is allowing exhibitors and festivals to consider the values of their organization and be more mindful in working.

“Fear makes us say yes all the time and not prioritize ourselves,: Duncan said. “If we move forward together we all have to be strong.”

Other talks included staffing changes, rethinking programming categories, data analysis, and reframing what virtual cinema is into better affiliate marketing strategies. For an industry built on changing, discussions that remain common topics such as grant writing, diversity issues were mixed in with new concerns such as having enough PPE, mental health of theatrical and festival employees and more.