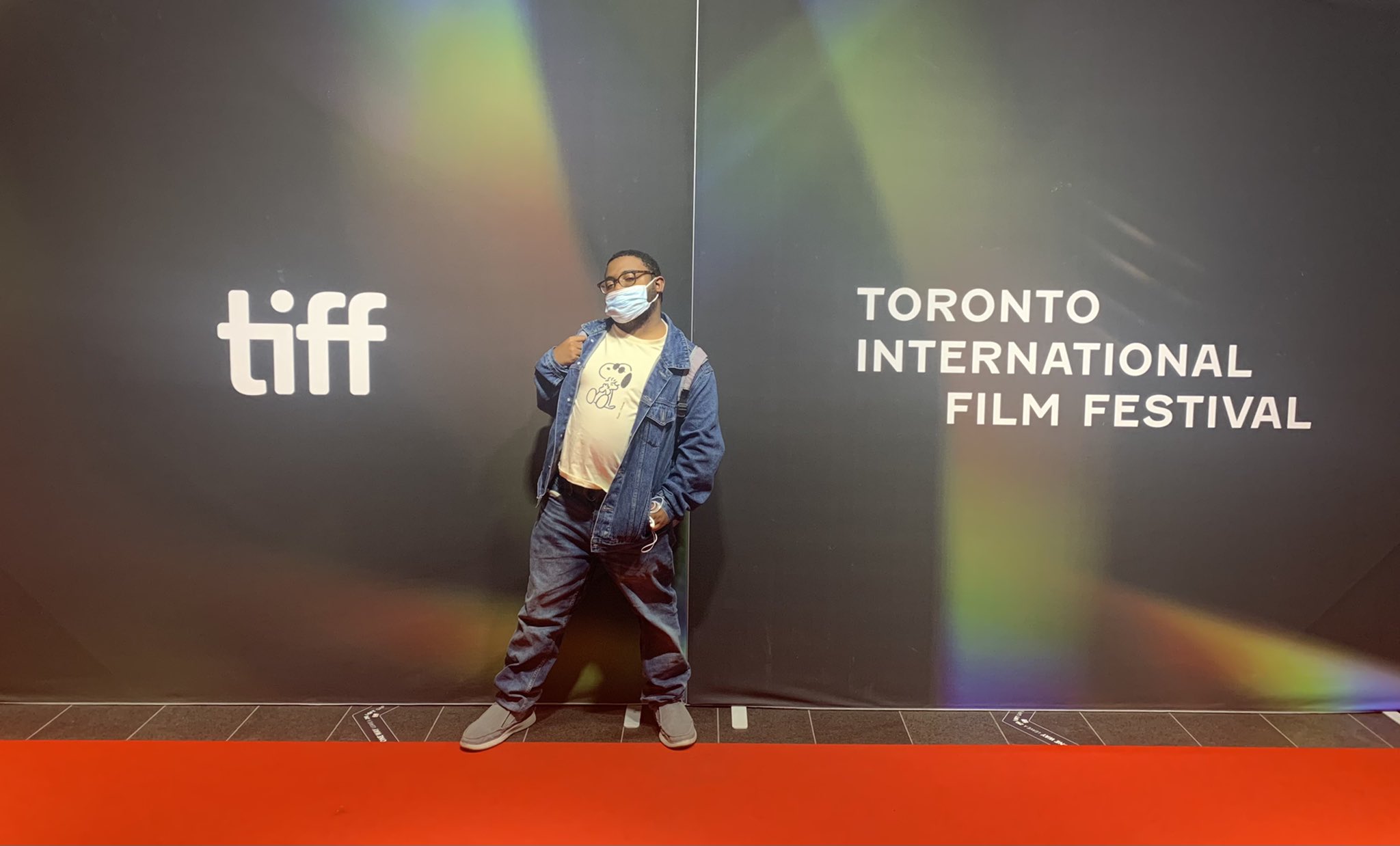 Editors note: While the usual Hammer to Nail writers opted to stay home this year and cover the Toronto International Film Festival virtually, other more adventurous writers decided to make the trek. What a trek it was! We asked our friend and fellow critic Rendy Jones (www.rendyreviews.com) to write about this year’s in-person experience.

My name is Rendy Jones (they/he) and I am / we are an independent film critic from Brooklyn, New York, operating my own self-published outlet “Rendy Reviews” for nearly a decade. Now that we’re no longer an undergrad student and have high ambitions for the next chapter of the “Rendy Reviews” brand via YouTube, I was determined to take the next step with TIFF in person. Though we have become more anxious regarding the gravity of traveling while still in a pandemic due to the Delta variant, we knew that in order to launch the Rendy Reviews YouTube channel like a new generation console, we had to bring our A-game to TIFF to cover all the biggest titles. Go big or go home.

TIFF 2021 or #TIFF21 as it’s being referred to on twitter, is my second ever TIFF that I’ve covered. Due to us not having a passport and only an enhanced driver’s license, we can only travel by land — which I’m okay with because it saves me money and I get to burn calories. Two years ago, we simply took a Megabus from NYC to Toronto, a 12-hour bus ride from Manhattan to the heart of Ontario, dusk til dawn. It was a simple trek. This year was uhh…a tad bit more hectic. We went on a Wizard of Oz-style journey from train to Amtrak, to a two mile walk through Niagara Falls’ Rainbow Bridge, through the border, to a bus, to the GO train, and then to a car to head to the place I was staying. I left the house at 6 AM and got to Canada 16 hours later at 11 PM. We felt exhausted and defeated even before the festival began. At customs, there was one guy working a booth and a long line of several travelers crossing. He took one person at a time, every ten minutes or so. I waited patiently while my phone was slowly losing battery.

Eventually we made it. But the first day of TIFF proved to be a series of unfortunate events that only a pandemic-set festival can provide. During my first year at TIFF in pre-pandemmy times, you had the regular moviegoing experience full of concessions, packed theaters, and long lines with industry and press showing off their badges. I quickly got into the routine of getting a Tim Hortons breakfast meal and stuffing my face while watching the first film of the day. While something should’ve initially told me that wasn’t the vibe this year, I arrived at the Scotiabank theater a few moments prior to my first film of the festival, Celine Sciamma’s Petite Maman, with confidence, holding a Tim Hortons breakfast in tow. Right as I made it to the entrance, the TIFF volunteer stopped me and told me I wasn’t able to bring any food or drinks into the theater. I looked both heartbroken and dumbfounded, and immediately checked my watch to see how much time I had before my movie began. With five minutes on the clock, I chugged my iced coffee like an alcoholic with his last beer before hitting the road, and scarfed down the breakfast sandwich and hash brown like a madman. As we navigated around the upstairs area of the theater, we saw no concessions or anything open at all. No lines, no food, no water, only volunteers scanning tickets. Yeah, you couldn’t even bring a water bottle into the theater.  This made me readjust my schedule, as usually I’m able to combine eating and watching movies, but now I had to take time out of my day to schedule having a light meal prior to whatever movie I’m seeing instead of doing back to back screenings as I usually do.

By the time I hit King Street where the majority of the main venues of the TIFF screenings were located, I felt a sense of emptiness in the air. The vacant sidewalks and empty streets factored into the festival not feeling like a festival at all. Two years ago, we felt claustrophobic in a good way, with moviegoers and industry alike all roaming around the closed off streets full of vendors, sponsors and games, while fans anxiously awaited celebrity arrivals, hoping to catch a glimpse of their favorite stars. All of that was gone this year. There’s typically a certain adrenaline that comes with attending a film festival, but on day one, the vibe was more chill and casual than glamorous and hectic. It felt so out of body and strange to me that by the time we attended the premiere of the opening night film, Dear Evan Hanson at the Roy Thompson Hall, there were completely empty sections. No red carpet or fan zones outside whatsoever. It didn’t help that one of the speakers, Legislative Assembly of Ontario member Lisa MacLeod said in her intro speech “We’re back! Here we are post-pandemic.” For the life of me I wanted to shout “POST?!” She deadass said “post pandemic” and I couldn’t help but think, “If this was post pandemic, I wouldn’t be wearing this mask nor would this theater look like it’s undersold.” This would’ve felt like a festival.

Then you had the press lounge which quickly became my major “no-no” area. Whereas 2 years ago, industry and press got to hang out in a room with endless coffee and computers, mingling and working to beat deadlines, this year we all had to hang out on the top floor, outdoors. There were literally no areas for people to charge their phones or laptops in order to work. There was a beautiful seating area that put you either in the tent or in the sun on comfy couches. But all this flash didn’t mean anything to me when there’s no accessibility for just about anyone to do their work. The only outlets available were right inside the entrance to the rooftop as you sat on the ground, across from the table of volunteers. We found better success at the Second Cup Coffee Co. across the street because they at least had plugs. After a few days of navigating through being unable to eat in theaters, adjusting to the grim non-festival-like tone, and going commando without my phone and laptop, TIFF’s anti-festival environment felt like a Darwinist type test that only my New Yorker survival skills could manage. Despite it all, we’ve seen a wide array of major titles thus far that were on our highly anticipated list. 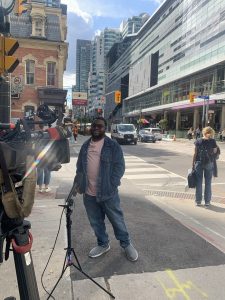 As I previously stated, my first film on opening night was Dear Evan Hansen. As far as “little white lie” storylines go, Dear Evan Hansen is on the same spectrum of cringe as Shark Tale. The telegraphed direction that Chbosky brings to the big screen is as much of a dud as Jon M. Chu’s 2015 film Jem and the Holograms. The ill-conceived and irresponsible plot is offensive and emotionally manipulative as you’re completely detached from a hella unlikable lead making selfish and sociopathic decisions. Our second film of the festival was much better. Belfast shows Kenneth Branagh putting away his big and bombastic blockbuster tentpoles to deliver a minimalist and personal slice of life story that’s short and full of heart. I’ve seen a ton of critics compare this to Roma due to its Black & White presentation and narrative style but it’s very different in tone and perspective. It has a sweet child-like nature that’s so distinct and true to the filmmaker. This crowd pleaser will make for good viewing around awards season.

Edgar Wright’s Last Night in Soho channels psychological horror with his signature style and boy was it underwhelming. It features an incredible lead performance from Thomasin Mackenzie where her character slowly builds confidence. That being said, the film’s screenplay is surprisingly undercooked in terms of character, dialogue, and even story. It may be my least favorite Wright movie even though it’s decent (at best). Where is Anne Frank is an eye-popping, mesmerizing visual splendor of animated excellence. The hand-drawn animation is so breathtakingly smooth in motion. If you’re a teacher who has to have “the lesson” with your students, this is a decent introduction to the subject. They’ll be entertained by the animation and storytelling while being educated about the figure herself. The Eyes of Tammy Faye is unable to decide whether it wants to be a biopic or a character study on a rather tragic figure. While its breezy storytelling is adequate at best, Jessica Chastain destroys the titular role in an incredible show stopping central performance.

One of the best films I saw was Jane Campion’s The Power of the Dog, a captivating and riveting western drama about masculinity that stands on a tier of its own. Campion’s poetic and mild-mannered lens allows this gripping Greek tragedy to blossom. Benedict Cumberbatch serves a top-tier performance that’s so raw and layered — unlike anything I’ve ever seen him do before. And in The Electrical Life of Louis Wain we get Benedict Cumberbatch AGAIN! This time Cumberbatch gets to let loose as a cat obsessed artist with a rather tragic yet profound life that is so heartwarming and colorful and sad. It mesmerizes as much as it hits you in the meow meow. I’m a cat lover, so of course I was a sucker for this.

Of course, these are just a few of the titles I’ve seen here for I still have many more to go. It was insane seeing how the negative reception for Dear Evan Hansen appeared right after its initial screening rolled out. Then after Belfast, so many people told me it was gonna be a Best Picture front-runner. While I think it’s a good film, it’s odd to see how many people easily recognize when the Academy is going to shower a film with love. Once TIFF ends and I finally return to my home in Greenpoint where I reside, a day later the New York Film Festival press screenings begin. I’m starting with an 11 AM screening of Paul Verhoeven’s Benedetta. I may not have academia to hold me down anymore, but boy is owning a website and covering movies on your very own hard work. I think I’m over this pandemic festival atmosphere. I long for the day where I don’t have to wear a mask in a theater ever again.