(NOTE: This is a reposting of an old list but it never gets old so we’re reminding you of it once again!)

In order to celebrate this 4th of July weekend, we thought we’d publish a new HTN list for your reading pleasure. Yet rather than paying a more blatantly direct tribute to that specifically American holiday, we decided to pick a topic that still screams 4th of July while also allowing for us to expand our horizons.

No, not flags (though maybe we’ll save that for next year). And, no, not hot dogs either (as that would almost certainly yield too long of a list). This year, we’ve decided to focus our attention on a much brighter, flashier, flamboyant symbol of Independence Day. That’s right, you guessed it: fireworks! As is the case with all of our lists—which we intend to begin publishing more frequently, we promise—this is in no way meant to be taken as a definitive statement. In fact, we are hoping to spark all of you faithful readers into action (pun intended) and get you to add your own favorite examples of fireworks in movies in the comments section below. So please contribute and have a very happy weekend!

Adventureland (Greg Mottola) — Again, I recognize it as self-serving but I will always love both Adventureland’s firework kisses and the bottle rockets on the hill as they both give me chills, capturing the romantic notion of glory—that never reaches its ultimate desire—and its inevitable end. And hey, it is the 4th of July in the movie too! (Ted Hope)

Avalon (Barry Levinson) — Levinson’s semi-autobiographical memory film begins with the arrival of Sam Krichinsky, a young Polish Jew, at Ellis Island on the Fourth of July. As he takes his first steps onto American soil, the air explodes with slow-motion fireworks, and he looks around him in wonder. I haven’t seen the film since it was released, when I was in high school, and can hardly remember anything else that happens in it, but this image of immigrant optimism remains fixed indelibly in my mind. (Nelson Kim)

Bottle Rocket (Wes Anderson) — Anderson’s debut feature isn’t included in this list based on its title alone. For those who don’t remember, there are actual bottle rockets on display, as the trio of hapless burglars celebrate their first “big score” and subsequent running from the law by stopping off at a roadside fireworks stand and shooting bottle rockets out of their moving car like the overgrown children that they are. (Note: This remains my favorite Anderson film by a wide margin.) (Michael Tully)

Fireworks (Kenneth Anger) — While still in his late teens, Anger conceived, directed, edited, and starred in this 15-minute psychodrama—a landmark in American avant-garde filmmaking, and a seminal (in more ways than one, yuk yuk yuk) classic of queer cinema. At a time when his sexuality was widely considered a perversion of nature and a criminal offense, Anger had the courage to put his deepest private fantasies on screen; the wit to treat them objectively, so to speak, and humorously; and the artistry to render them in gorgeous images that still have the power to amaze, nearly sixty years later. Oh, and the only shot of actual fireworks in the film is one of the great dick jokes in the history of cinema. (NK) 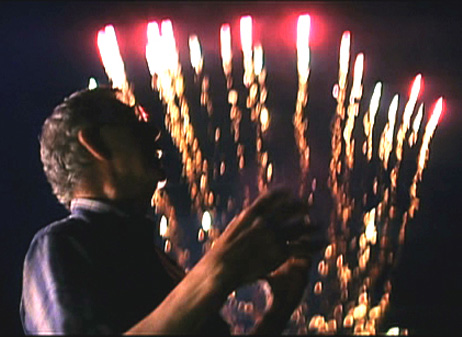 The Guatemalan Handshake (Todd Rohal) — Not only does Rohal’s wildly inventive picture climax with a truly delightful fireworks display, but fireworks also play a vital role in sparking that climax, helping to solve one of the film’s many strange mysteries. (MT)

Manhattan (Woody Allen) —The opening sequence, set to Gershwin’s “Rhapsody in Blue,” as fireworks light up the sky. Black-and-white but perfect. (Tom Hall)

Mean Streets (Martin Scorsese) — No actual fireworks are shown, but Michael (the aspiring wiseguy) and Tony (the bar owner) scam the Riverdale kids who come downtown looking to score some. “You got sparklers?” “Yes.” “Cherry bombs?” “Yes… Now, what we’re gonna do is, we’re gonna let you out right on that corner and we’re gonna come back for you… We’ll be back in about 30 minutes.” (NK)

Meet Joe Black (Martin Brest) — For me, though it’s not indie, a shout out should go to Meet Joe Black. It was hell for me but we had the Gauchi brothers, who do the NYC 4th of July fireworks, shoot off a massive amount of fireworks as close to the ground as possible for twenty nights. They spent close to $200,000 every night… it’s in the climax scene at the party so maybe people can fast forward if they just want to watch fireworks rather than a bloated overlong film. The experience for me ruined all interest in fireworks. (Mike S. Ryan)

To Catch a Thief (Alfred Hitchcock) — The French Riviera, a high-class hotel, a dark room, Grace Kelly and Cary Grant on the divan—the classic sex metaphor is obviously called for in this scenario, and Hitch doesn’t skimp on the explosions, either. (CG)

(This clip cuts out at the 1:10 mark but it’s still very worth watching.)

Zodiac (David Fincher) — A menacing, sweeping shot set against the bay, fireworks in the distance… (TH)

There’s a really amazing episode of a canceled Nickelodeon show called Cousin Skeeter (who remembers this puppet-filled Cosby ripoff from the late ‘90s? No one? Ok, cool) in which the puppet voiced by Bill Bellamy believes he and his lady friend have amazing chemistry because he saw fireworks when they kissed—but it turns out that they were just standing near some ACTUAL fireworks! (LD)

Of course, the Opening Credits of Love, American Style. (TH)