Editor’s Note: We are very pleased to post this essay by Louisina-based filmmaker Zack Godshall, whose Lord Byron is quite excellent. Visit the film’s official website to learn more.

Revolution
My new film Lord Byron will premiere at the Sundance Film Festival this January in the NEXT section, a new category reserved for low budget films. 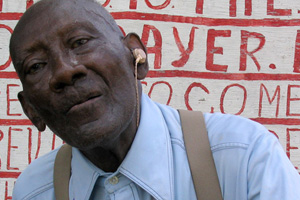 Apocalypse
In the fall of 2008, I was hardcore stressing about how to secure financing for a script I’d written.  A few notable actors were in place, a couple of established producers were on board, and even a small company with money.  I had financing for a feature film – that ever-elusive rainbow’s end.  But something wasn’t right. The company wanted to shoot before the end of the year, and it was already October.  On top of that, I would have to re-write the entire script to take place in another state, as per the financier’s demand.  Plus, I was in the midst of completing my documentary God’s Architects.  I couldn’t just abandon that film for another year.  I felt like this whole money-chasing game was all wrong and somehow insanely desperate.  I was anxious.  So I went to sleep.

It was then, in my sleep, that I heard a voice, as if in a dream, though not quite a dream.  It was a voice from nowhere speaking with profound, Herzogian authority.  The voice echoed in my half-sleep: “Rid yourself of lofty aspirations and just be totally vulnerable.”

I woke up and immediately wrote the words down on a notecard.  I kept the card in my empty wallet from then on.   I knew it was a motto.  A creed.  A manifesto in miniature.  These were words to live by.  To make films by.

But taken as advice, don’t these words necessarily negate a career in film?  As a young, independent filmmaker, isn’t it part and parcel of the job to have lofty aspirations toward which to aspire?  Doesn’t one always aspire to a higher station in life?  At least career-wise?  Bigger budgets.  Larger and more professional crews.  Recognizable, and hopefully famous, actors. Red Camera.  35mm.  Sundance.  Cannes.  Venice.  Oscars.  Criterion Collection.  Reviews in Filmmaker Magazine.  The LA Times.  The New York Times.  Sight and Sound.  Touring retrospectives.  My own section at Cinefile.

But what are these things?  What do they have to do with filmmaking?  Storytelling?  Where is the story?  The teller?  The audience?  Where is cinema in all those aspirations?  Where am I?

Needless to say, I never made that film – the one with the “supposed” financing in place.

I spent the rest of 2008 finishing up God’s Architects, a documentary which I also shot and edited myself, and I recognized that I could make a feature in the same way.  I just wasn’t completely confident that I could come up with a story that would lend itself to such an open-ended, one-man band approach.

Revolution
A few weeks into 2009, my good friend Ross Brupbacher suggested that I make a film without a script, that I dive into a world and let the world itself guide me.  He encouraged me not to censor myself by adhering to a dogmatic approach to filmmaking.  He thought it would free me up creatively and psychologically.  He thought I was too bogged down by systematic ideas about how to make a film.  The idea was terrifying at first, despite the sense of freedom it evoked in me. 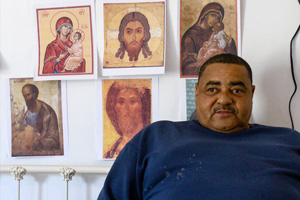 A week later, Ross suggested to me the initial idea for Lord Byron, a guy who loves women, drugs, and booze decides he wants to become a monk.  I loved it and said we should make it together as quickly as possible.  Ross agreed.  And since Ross had never made a film before, I knew he had no idea about what he was talking about or what he was getting himself into.  This is also why I also decided to take his advice and follow his lead at every turn.  He wouldn’t know when to say when, nor would he know any system or method.  (He still has no idea what the 180-degree rule is.)  I protected his innocent perspective, for I knew it was my golden ticket to breaking new ground, to being completely vulnerable.

We wrote a brief outline of the story and started casting the film out of Lafayette, Louisiana, our hometown.  A few weeks later and with Ross’ sister Allisa as our third crew member and a middle-aged barber from Church Point, Louisiana, as our lead, we were climbing on roofs and traipsing through swamps to shoot this hare-brained idea of a film.  I maintained a willful ignorance of any and all precedent.  I had little clue what I was doing.

We did have a story, however.  And a focus – a focus on two highly important methods: storytelling and play.  Not only story, but really storytelling.  And by play, I mean that making this film was more like playing in my backyard as a kid.  From working with the actors all the way down to the stylistic techniques themselves, making Lord Byron was always a playful experience.  Filmmaking wasn’t a stressful execution of a pre-figured, pre-mapped expedition.  It was an exploration.  A discovery.  And a game.

Why did I do this?  Why would I spend my precious filmmaking time and energy on such a weird experiment – an experiment that would last two years, no less?  Because the dream-voice told me to.  Because Ross suggested it.  Because it was the most wildly creative time in my life since playing “Frank Buck” in my backyard.  Because I wanted to prove to myself that filmmaking is not a machine – that filmmaking is not an industrial technology that requires a hierarchical crew of specialists.

Throughout the process, it really was as if I were that kid who enthusiastically, naïvely, picked up his parents’ VHS camcorder and made a movie with his friends.  Just to do it.  For fun.  For the pleasure of recording images and performances and moments of life.  And for the joy that would come once those parts were pieced together.  There was no deadline to finish the film.  No pressure to finish at all.  No investors to please.  People weren’t telling me no.  And there wasn’t anyone telling me what was proper and appropriate.  And at some point the film began to develop a unique personality, to take shape and become something all its own.

A community was born out of the impulse.  The Lord Byron community.  It was a community of musicians, artists, and artisans.  And a few actors.  All very creative people.  And each highly open to the collaborative process we developed in making the film – a process that was more like some sort of creative and synchronistic flux in which we found ourselves swimming and playing.  It was strange and wonderful.  We were all guiding and being guided by one another.  Horse and rider were indistinguishable.

Initially, I got decided to make Lord Byron with Ross to see what would happen.  To challenge myself creatively.  To create something in a new and innovative way, a way without precedent (at least for myself).  To collaborate with non-industry people who were full of fresh and original and uncomplicated, unclouded ideas.  And now I realize that even if the film were a complete and utter failure as a film, it would always be a profound turning point, a revelation, a revolution, an apocalypse for all that was and all that will be, an end and a beginning in an of itself.

Apocalypse
Lord Byron got into Sundance.  There’s the initial rush of shock and validation.  And then – the old anxious feeling.  Why feel anxious after this supposedly good news?  Lofty aspirations.

Revolution
So now I’m back on semi-solid ground in Louisiana, preparing to go to Sundance with my new feature film, the second of my three features to get into Sundance.  I’m 31 years old.  Big moment in my career, right?  What are my aspirations this time around?

Remember the voice.  Hear it.  Read it.  Say it: Rid yourself of lofty aspirations and just be totally vulnerable.

At Sundance this year, more than anything else, I plan to celebrate being with my collaborators, friends, and family, and all the other filmmakers who have time to celebrate at the greatest of independent film festival in the world.  Sure, Sundance does attract “the industry”, but they also programmed Lord Byron and started the NEXT section for low budget features.  And it is a festival.

And perhaps most of all, I look forward to sharing Lord Byron with whoever will come see it.  I promise seeing it on the big screen will be a wild ride.  It might change your life.  It changed mine.  And if you stay for the Q&A, I’ll try to tell you about it.

Apocalypse
What about selling the film?

Revolution
We made it for less than a grand.  We’ll figure it out.