(This essay is a joint post with Ted Hope’s Truly Free Film blog. For more information, visit the official Putty Hill and Metal Gods websites, as well as the Putty Hill Kickstarter page to contribute to the cause.)

2009 was the summer of my liberation. After three years developing a script I never made and marketing it to a sleeping industry, I declared independence and made a film without permission. 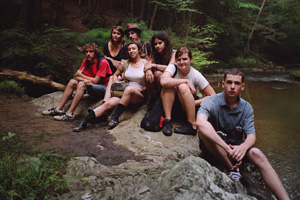 This film, my second feature, Putty Hill, will premiere this month at the Berlinale as part of the 2010 International Forum for New Cinema. It marks a fresh approach to American regional cinema that stands apart from the romantic, anthropological, and formally conservative examples that have emerged on the art‐house circuit in the last few years. This has little to do with my talent and everything to do with our means of production. Truly collaborative, egalitarian, and economical, the traits of our model appear in stark contrast to the division of labor and totalitarian authorship characteristic of most film productions, even those made on the smallest scale, still beholden to a model developed off the Pacific coast and commodified in the dead shadows of Manhattan.

As a commodity, independent film has failed. Yet, regional cinema, of all the arts, has the greatest potential to achieve something close to objective reality, if such a thing exists. Its ontological value cannot be denied. Yet, in order to reach its potential, regional cinema must be freed from the confines of the old marketplace and made in a manner that honors its subjects, its audience, and their environment as authors and players in a collaborative process of production and distribution.

Perhaps this is nothing new. We’re learning as we go. But, I’ll proceed as if our process is novel in these times, and for the sake of argument, if nothing else, detail the progression of Putty Hill from conception through development and into the early stages of distribution. 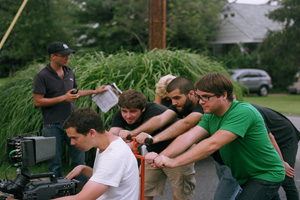 Putty Hill was born from the ashes of a full feature script called Metal Gods, which chronicled a week in the lives of a group of marginalized kids in Baltimore City who live and love heavy metal. I wrote it with my collaborator Jordan Mintzer. Determined to make our sophomore effort a memorable one (after our critically‐ acclaimed but relatively hidden first feature, Hamilton), we worked hard on developing a regional story with universal themes. In 2007, we began casting and assembling the ingredients to shoot in the summer of 2009. Money was a big concern—our low budget estimate was $350K—and we peddled the project to everyone we knew and many we didn’t, inside and outside the industry.

In September of 2008, the screenplay was accepted to participate in IFP’s Emerging Narrative Program at Independent Film Week. This opportunity provided us with a chance to sit down with independent producers and financiers, and we had many meetings, friendly and informative, which resulted in broad smiles, handshakes and even some business cards. We followed up as best we could, but unquestionably, the most valuable thing that came from the week was a grant in the form of a camera rental from IFP and Panasonic. Going into Putty Hill, when we finally put Metal Gods aside, this was all we had: a camera, $20,000, and 12 days to shoot.

Because we couldn’t find financing, our hand was forced, and there wasn’t the time to develop a new feature‐length screenplay. We decided instead, since we had cast, crew, and locations in place from our time spent in pre‐production on Metal Gods, to move forward with a five‐page treatment crafted from the experiences and environments familiar to the team we had in place. I hoped it was a feature, but was hesitant to call it one, having not directed such a brief and open scenario before. 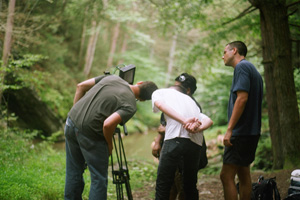 In essence, Putty Hill wasn’t much on paper. It was an outline, a skeleton that my dedicated cast and crew, and the community at large through their unending support, brought to life. Each of us on production, from my students at the university where I teach, to my cinematographer, Jeremy Saulnier, were equally invested and involved in the success of the project. Every actor was non‐ professional; our AC was also the Head Gaffer; one of my producers had never worked in film before, neither had our script‐supervisor; my wife was the costume designer; our editor had never cut a narrative feature; local businesses donated food, services, and equipment; people took off work and didn’t get paid. Writing this, I realize I’m describing the familiar clichés of the low‐budget indie film experience—it’s nothing new. Where this project differs from the norm can be seen onscreen, in the product, which honors the contribution of every component member of production. If nothing else, I’m confident of that. Plus, it’s sexy as fuck.

Though we’ve been invited to premiere at the Berlinale and SXSW, Putty Hill is unfinished. We’ve amassed over $10K in credit card debt, none of which has gone to compensate our post‐production team for their services. In addition to debts owed, we have large festival and marketing expenses mounting, upwards of $20K.

If our production followed the Pedro Costa model, let’s say, our post and distribution strategy follows the Four Eyed Monsters model, thanks in large part to Kickstarter, a site developed under the influence of the fundraising and marketing strategies originated and implemented by Arin Crumley. In keeping with our objective to focus on the local while reaching the widest audience possible, we’ve mounted two successful fundraising campaigns in Baltimore, Maryland, which have raised over $5K. These, in conjunction with the Kickstarter campaign, have helped us reach our projected goal of $10K in just one week. But that’s less than half of the money we estimate we need to complete Putty Hill and ready it for exhibition.

Ultimately, our methods of working and our limited resources have allowed my team the freedom to stay open to the potential for magic, which only appears when things are left to chance. There are no rules to follow to guarantee the emergence of magic (which, in turn, leads to an audience’s experience of surprise), but there are a list of things to avoid. I won’t go into them here, but you might guess what they are. Or maybe they’re different for each of us. As in life, when we wish to be free, we must be willing to break the rules and work outside the system, even in the face of poverty and obscurity. I make $20K a year, yet I’ll continue to pay my collaborators first. How about you, filmmaker? What do you make?