Barry Sonnenfeld hates panning. Throughout his hour-long Kodak-sponsored Cinematography Master Class at the 2009 Hamptons International Film Festival (moderated by the Museum of Moving Image’s Chief Curator David Schwartz), Sonnenfeld pummeled that particular technique-of-the-trade into submission. “That’s why movies are longer than 90 minutes—too much panning.” He went on to add that if one does decide to pan the camera, then people better be talking. But even then, don’t do it. Just don’t. With refreshing candor and keen insight, Sonnenfeld shared his own thoughts on the art and craft of cinematography, as well as his own accidental promotion to the director’s chair. It’s no wonder this guy is a recurring guest on David Letterman. Here are the most revealing snippets from the class, with my own (unnecessary, I know) added commentary:

— When working with the Coen Brothers on Blood Simple, Raising Arizona, and Miller’s Crossing, they took the self-conscious stance to have the camera become its own character. Rather than trying to stay out of the way, they sought new ways to give it a solid presence. He pointed out the scene in Blood Simple in which the camera pushes in on a man passed out in a bar, then, when it gets to him, it elevates high enough to continue moving past him. He also showed and discussed the infamous scene in Raising Arizona in which the camera speeds through the driveway, up a ladder, and into the baby’s bedroom where the wife turns and screams. That last moment was actually shot backwards and upside-down, so that when the film was developed and they played it in reverse it was in forward motion and right side up. He stressed how all of their tricks at this stage in their career were done through practical ingenuity and not fancy effects.

— Sonnenfeld strongly believes that director’s cuts should always be shorter. He expressed dismay at filmmakers who actually extend the running times of their original versions. “You should take out the stuff that didn’t work.” (See: the Coen Brothers’ director’s cut of Blood Simple.) Having only made two films that I am afraid to revisit for fear of encountering cringe-worthy moments to which Sonnenfeld alludes, I agree with this approach completely. One does an assembly, then spends the next however many weeks/months shaping, refining, and trimming that timeline into a more groovy place. Eventually a deadline arises—festival acceptance, studio demand, etc.—forcing one to call it a picture lock and move on to more pressing matters (sound designing, color correcting, etc.). Without that deadline, the urge to keep tweaking almost always remains. When it comes to the concept of addition vs. subtraction with regards to director’s cuts, I think Terrence Malick is the only filmmaker who makes me want to see more, more, more.

— “Make decisions in pre-production, when it’s cheap.” Clearly, Sonnenfeld’s style of storytelling is more geared toward this approach, but even if one believes in improvisation and doesn’t like to meticulously storyboard, the fact remains: the better the preparation, the less chance of on-set friction and confusion. Film productions are runaway tornadoes waiting to happen. The best way to combat those rising winds is to do as much planning as possible. Showing up at a location that hasn’t been scouted is a recipe for disaster, or at least for falling way behind schedule. The more aware of a location’s limitations the crew is, and the more a director knows what they want when they show up to set that morning, the better off everyone will be.

— Sonnenfeld lights for individual shots, not for sets. He used current Coen Brothers’ collaborator Roger Deakins as an example of a cinematographer who lights in a way that allows for the entire room to be used in one shot. But that sets up an environment where panning can occur, and we all know how Sonnenfeld feels about that. Funnily, he went on to add that he had just seen—and loved—A Serious Man, and he got an excited note from the Coens acknowledging that film’s comparative lack of pans.

— When working with the Coen Brothers, the trio never held any major pre-production viewing marathons to get in the tonal mood for each project, though Sonnenfeld did say that before each shoot they watched the same two movies every time: Dr. Strangelove and The Conformist.

— “I always want it to look beautiful, not real.” This very telling quote firmly establishes Sonnenfeld’s primary, overriding approach to lighting. He said that he always lights the short side of an actor’s face. He’s not worried about where the light is coming from in the real world—through a window, from the sun, etc. My inclination, as a filmmaker and a film watcher, is “real” over “beauty,” but after hearing Sonnenfeld speak about this distinction, it has opened my eyes in a new way.

— Barry likes the color green. Barry doesn’t like the color blue. He learned this lesson from Gordon Willis, who taught him that whenever you put blue in a scene, your eye goes right to it. Barry prefers to shoot actors in front of darker, richer backgrounds, as opposed to a flat white wall (he must hate mumblecore).

— When moving from DP to director—a proposition that was presented to him by producer Scott Rudin, not something he himself actively sought out—Sonnenfeld was justifiably concerned. There were far more instances of accomplished cinematographers making unsuccessful transitions to the director’s chair. He was so worried that he studied this phenomenon, realizing that in almost every situation, the newly appointed director had simply graduated his camera operator to the position of DP. Instead of sticking with that approach, Sonnenfeld decided to hire an accomplished DP that he could trust—in the case of The Addams Family, it was Owen Roizman (The French Connection, The Exorcist, Network)—which released an enormous amount of pressure and allowed him to concentrate on the more pressing task at hand: directing.

— “Directing is parenting.” Sonnenfeld used an example from when he was a cinematographer, but the same rules apply. When shooting When Harry Met Sally, they did a walk-through of the scene one morning, which took place on the street. At this point, the actors were still reading from the script, so their walking was slower. Sonnenfeld lit to the mark where they stopped in this rehearsal. When the time came to shoot, Meg Ryan had picked up her pace tenfold and just blew past her mark, much further down the street. Sonnenfeld knew that relighting to her new pace would take too long; it wasn’t an option. He also knew that explaining this technical situation to Ryan was not the right approach, so instead he casually said to her, “It doesn’t matter where you stop, I’m just letting you know that if you accidentally stop there, you look beautiful.”

— “No matter what Steven Soderbergh or Michael Mann think, their best work was shot on film, not video.” Amen.

— “Don’t show anything to anyone before you’re ready to show ‘em.” This is a very important point. Sonnenfeld gave the example of wardrobe. When going into an important meeting for a film in which the studio wanted to see an element from each piece of the production, he knew that the wardrobe situation wasn’t ready. Rather than show them something that wasn’t exactly what he knew it was going to be, he took a firm stance and said that the wardrobe wasn’t ready yet. They were okay with that. Had he shown them a rough example, they wouldn’t have been able to let it go and this would have created its own irrelevent discussion.

— Throughout the class, six clips were shown, which Sonnenfeld talked over like a he was doing an audio commentary. In Blood Simple, he pointed out a moment of gorgeous serendipity that could never have been planned but that added immeasurably to the story. As the main character drives down the road, a huge flock of birds leaves the earth and flies into the sky. But as if that weren’t enough, the flock actually unleashes a haunting shadow on the highway itself when they fly past, high above and out of frame.

— After the clips were shown and discussed, Schwartz opened up the floor for questioning. At one point someone asked, in reference to Sonnenfeld’s rigid storyboarding and pre-planning, “What happens when you get on set and your actor has a really good idea?” To which Sonnenfeld replied, “Well, that’s not gonna happen.” He was clearly kidding, but he explained that he is open to ideas, he’s just a firm believer in planning, planning, planning. That, and not-panning, not-panning, not-panning. 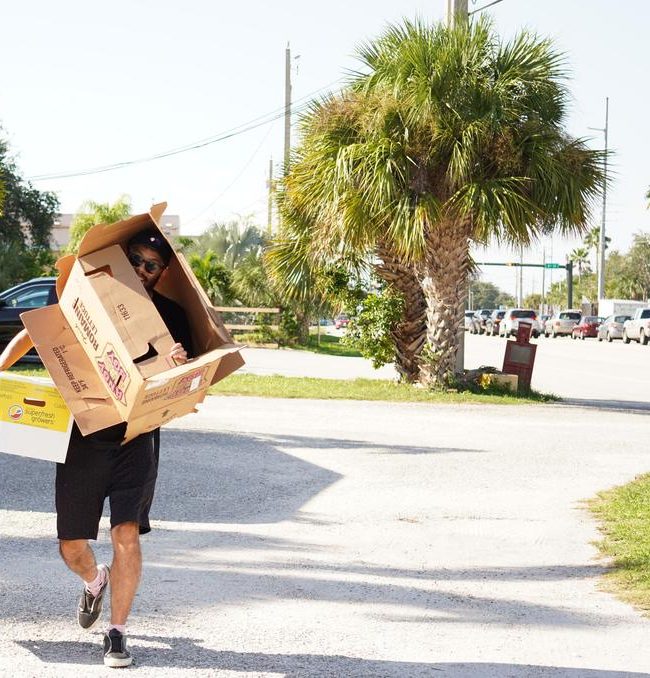