A Report From the 2009 Cinema Eye Honors

(The following report was submitted by Steve Holmgren and Liz Byer. As we were unable to attend this year’s festivities, we were happy to receive it, and now, to post it.)

Independent filmmaking is a notoriously thankless proposition, and this is especially true when it comes to indie documentaries. On Sunday, March 29th, at New York City’s TimesCenter, the second annual Cinema Eye Honors did its part to highlight some of the top talents in documentary from this past year. The awards were the brainchild of documentarian/blogger A.J. Schnack, who partnered with documentary guru Thom Powers (host of the popular documentary series “Stranger than Fiction” at the IFC Center) and Indiepix to help bring his idea to fruition. 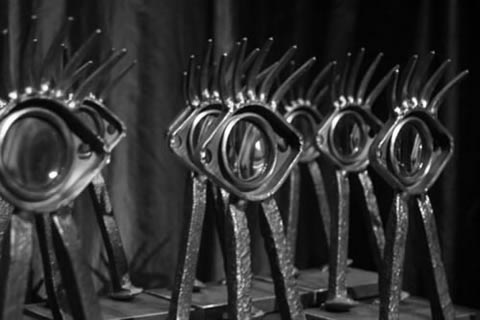 This year’s nearly sold-out event brought together all the major players in the documentary film world, from nonfiction pioneers like Albert Maysles and D.A. Pennebaker to up-and-coming luminaries like Morgan Spurlock and Gary Hustwit. Also on hand were a slew of cultural icons running the gamut from Laurie Anderson and Lou Reed to the ever whimsical Philippe Petit.

Thom Powers set the tone for the evening, remarking—in the words of Jason Kohn, whose Manda Bala (Send a Bullet) took top honors last year—that the awards are both a “celebration and a vindication” for the filmmakers involved. Because of the strict Academy regulations in the documentary category and the difficult distribution climate for independent films, so many outstanding documentary films pass beneath the radar. The Cinema Eye Honors was created help remedy that situation by not only honoring some of these films, but also highlighting the often overlooked figures who contribute greatly to the filmmaking process—producers, cinematographers, and editors.

Following Thom’s rousing intro was a brief presentation by co-chair Schnack, starting with a video montage of scenes from some of the nominated docs and footage of guests of this year’s True/False Film Festival discussing their favorite moments from the films, which served to whet everyone’s appetites for what was to come. A.J. then made his grand entrance with filmmaker and P.O.V. series director Yance Ford, both of whom were decked out in full Mardi Gras king and queen regalia—a nod to this year’s four-time nominee The Order of Myths. (Later in the evening, sporting her trademark shaved head and pantsuit to present the honored short subject films, Ms. Ford quipped that Schnack was the only man in the business who could convince her to wear drag.)

The evening’s final two awards were presented by Maysles and Pennebaker. Maysles was his usual animated self, spouting inspiring Hitchcock quotes and endearing himself to the audience by goofing on the name of the award, referring to the trophy as the “Camera Eye.” Pennebaker was avuncular and moving, delivering a heartfelt speech about how far the craft has come since his days of making films, when directors were saddled with oversized, clunky equipment. Pennebaker presented the top prize of the evening to James Marsh, for his Man on Wire. The crowd was eager for the film’s star subject Philippe Petit to deliver some of his trademark antics, but while he was only able to muster a half-hearted fake trip en route to the stage he still capped the evening off on an upbeat note, encouraging everyone to keep making films.

There has been some valid criticism about the selection of nominated films, mostly chosen by top festival programmers who already have a strong influence over what docs get awards and distribution. As Cinema Eye continues to mature, it would be great to see a possible shakeup in who selects the finalists to somehow give attention to more deserving, lower budget docs. They may at the least want to institute a category similar to the Independent Spirit Awards “John Cassavetes” honor for features made below a certain budget. The honors also made a step in the right direction by recognizing five top short docs, but hopefully this category can be fleshed out more and given an official award in years to come.

All in all, it was a warm, festive experience for everyone involved that did fulfill the stated mission of showcasing the thriving yet under-appreciated art of documentary film. That said, the evening’s fraternal, insular tone may have slightly undermined the purported goal of attracting public attention to this genre. It was a meaningful ritual for those in attendance, but whether these awards translate to an actual surge of interest in nonfiction film remains to be seen. Either way, it was heartening to forget the harsh realities of these difficult economic times and indulge in a little celebratory glamour for the night.

Complete list of winners from the 2009 Cinema Eye Honors (by order of the ceremony):

Outstanding Achievement in Debut Feature: Yung Chang, Up the Yangtze

Outstanding Achievement in Grapic Design and Animation: Waltz With Bashir

Outstanding Achievement in Cinematography: Peter Zeitlinger for Encounters at the End of the World