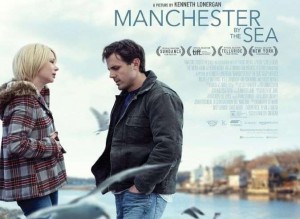 To call Manchester by the Sea writer/director Kenneth Lonergan’s masterpiece is not an exaggeration. This is a near-flawless film. (And further proof that HBO needs to give Lonergan his own limited series a la Lisa Cholodenko’s Olive Kitteridge or Todd Haynes’s Mildred Pierce.) It features a no-weak-link ensemble cast headed by controversial actor Casey Affleck – who, after being accused of sexual misconduct and harassment by I’m Still Here producer Amanda White and the film’s cinematographer Magdalena Gorka, settled out of court back in 2010. It also stars the luminous Michelle Williams, Kyle Chandler (Friday Night Lights, Bloodline) and Lucas Hedges (best known to Wes Anderson fans from his turns in Moonrise Kingdom and The Grand Budapest Hotel), who together bring to vivid life Lonergan’s tale of an uncle (Affleck) haunted by his own demons suddenly forced to look after his fatherless nephew.

Like another one of my favorite flicks of 2016, Chris Kelly’s Molly Shannon-starring Other People, the script’s heartbreaking subtext coursing through the soul of the film (i.e., the ever-present specter of death) is elevated through a text abundant with the hilarious absurdities of everyday life. In both films this contrast becomes the screenwriter’s secret weapon – resulting in an emotional roller coaster that leaves us literally laughing through our tears.

And the overwhelming vastness of nature, of the New England waters, is captured through expansive cinematography, which also contrasts thrillingly with the small town world that the sea butts up against. The editing in Manchester is stupendous – as scenes from the past and present similarly flow together like the waves of the sea, revealing through detailed images exactly how all our yesterdays are forever forming our daily existence. In addition, the film’s elegant classical score serves to heighten the momentousness of this blue-collar drama. As far as I can tell, Lonergan, a longtime playwright who’s been wowing filmgoers since his 2000 breakout debut You Can Count On Me, seems set to take his place as one of the great American directors of our time. 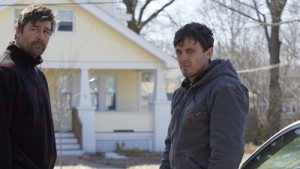 All of which renders the allegation-trailing Affleck a mere drop in Lonergan’s cinematic ocean. Sure, Affleck – in a role that appears perfectly tailored to Lonergan muse Mark Ruffalo, and which had at one time been designated for Manchester producer Matt Damon – knocks his portrayal of Lee Chandler out of the ballpark. But so would have Ruffalo or Damon or a handful of other topnotch character actors. As the credits tell us right from the beginning, Manchester is “A Picture by Kenneth Lonergan” – i.e., this is an auteur’s, not an actor’s, showcase. And if we’re going to start holding auteurs accountable for their lead’s reprehensible actions against women off-screen then every director who’s ever hired the likes of wife-slapping Sean Connery to spousal abuser Sean Penn will suddenly be fair game.

Indeed, why no public outcry (besides over the dearth of actors of color) against another 2016 standout, Joel and Ethan Coen’s Hail, Caesar!, as the brothers chose to cast wife-beater Josh Brolin – whose character, ironically, face-slaps a rebellious ingénue within minutes of the film’s start – in their latest comedy? To me, an auteur boycott is a bridge too far (a better strategy for those so inclined would be to simply use social media to target the “bad” actors themselves, rendering them too toxic to hire) – and, most crucially, a dangerous precedent to be setting for the future of independent film.