In preparation for the theatrical release of I Saw The Devil, BAMcinematek is paying tribute to South Korean director Kim Jee-woon with a retrospective, Severely Damaged: The Cinema Of Kim Jee-Woon (2/25-3/2/11). With six features under his belt in just over ten years, Jee-woon has managed to never repeat himself while retaining a vision that is undeniably his. In many ways, Jee-woon’s style is most strikingly defined by its glorious collision of contradictions. On the one hand, there are the fittingly dark adjectives: gory, punishing, bloody, vengeful, violent. Yet on the other hand, the following descriptors apply as well: light, tender, lovely, beautiful, sweet. Whatever the genre—horror (A Tale of Two Sisters), perverse comedy (The Quiet Family), Spaghetti Western (The Good, The Bad, The Weird)—Kim Jee-woon brings the care and precision of an auteur to everything he touches, resulting in movies that gleefully shred the line between art and entertainment. They can be thoughtful and intense, but they are always fun.

While some of Jee-woon’s early releases are unavailable in the States, and for those of you who don’t live in NYC or who are unable to visit BAM during the retrospective, fear not. Two of his films are currently anybody’s for the taking on Netflix Instant (see below). And then, of course, there’s the controversial I Saw The Devil, which opens theatrically in New York City on Friday, March 4, 2011, and will certainly be making its way to home video (as well as Video On Demand, presumably) in the very near future.

The Quiet Family (1998) — Jee-woon’s debut owes an obvious debt to the Coen Brothers, and, in some ways, it shares an even more direct kinship with Sam Raimi’s A Simple Plan—i.e., it’s one of those deliciously twisted romps that spins further and further out of control. When a family takes over a lodge in the mountains and opens their doors for business, the trouble begins. Then it continues. Then it really continues. While The Quiet Family can be read as a scathing indictment of traditional Korean family values, it can also be more viscerally appreciated as a popcorn ready comedy-thriller. 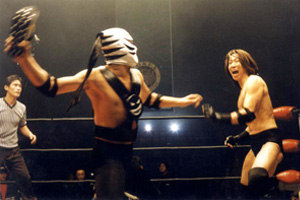 The Foul King (2000) — If you live in NYC, be sure not to miss the rare chance to see this truly original comedy on the big screen (Tuesday March 1st, three showings!). In it, the always excellent Song Kang-ho—whose comedic gifts are out of this world and should be studied by actors everywhere (though I’m pretty positive this type of magic can’t be taught)—plays a hapless bank clerk who is tired of getting put in headlocks by his militaristic boss. Pushed to the brink, he takes matters into his own hands. His obsession with wrestling leads him to the gym of a former wrestling great, and soon he has joined a professional league as a villain named “The Foul King.” It’s hard to find a cinematic equivalent for this film—the Farrelly Brothers direct Fight Club?—which is what makes it so invigorating and fun to watch.

A Tale of Two Sisters (2003) — This is the film that put Jee-woon on the world cinema map and made him into a box-office record holder in his home country. It’s also the first time in which he leaves the humor on the cutting room floor and digs deep into the heart of his chosen genre (that genre being Horror with a capital H). Creepy and unsettling, A Tale of Two Sisters has a twist of a payoff that would make M. Night Shyamalan proud, but it’s also graced with a breathtaking artistry that separates it from the typical horror pack. ***Stream It Now*** 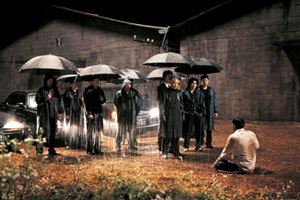 A Bittersweet Life (2005) — It’s virtually impossible not to see this as Jee-woon’s answer to Park Chan-wook’s Oldboy, but that isn’t a bad thing, necessarily. In this stylish and intense drama, Lee Byung-hun plays Kim Sun-woo, the robotic henchman of a crime boss who has found himself a pretty young mistress—so pretty, in fact, that she manages to crack Sun-woo’s typically rigid shell, and, in a moment of weakness, he finds himself unable to fulfill his boss’s orders. This small betrayal unleashes a series of increasingly bloody encounters between Sun-woo and countless adversaries that eventually culminates in an operatic climax of the highest order. More than just an exercise in style, A Bittersweet Life delivers an emotional impact as well.

The Good, The Bad, The Weird (2008) — Wow. Widely reported as the most expensive Korean film ever made, Jee-woon’s first Spaghetti Western—or, better yet, a Guksu (Korean noodle dish) Western—is a dazzling, unhinged spectacle. Jee-woon regulars Song Kang-ho (“The Weird”) and Lee Byung-hun (“The Bad”), along with Jung Woo-sung (“The Good”), form the trifecta that gives this film its title. The time and place is 1940s Manchuria and the oh-so-important ‘thing’ is a treasure map that will drive these men to do whatever they must to take home the prize. Action-packed and laugh-out-loud funny, this is the type of ride that will make you smile even if you this genre isn’t typically your thing. (Oh yeah, if it’s true that this movie only cost 17 million U.S. dollars, Hollywood should be ashamed of itself.) ***Stream It Now***

I Saw The Devil (2010) — I’m going to save my words about this one for my full review (to be linked to here when it’s posted), but suffice to say, this brutal investigation into the nature of revenge might make you think twice about your own killer instinct to do unto others what they have done unto you.