Well this sure is a meaty week with lots to choose from: 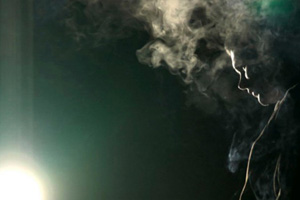 Brock Enright: Good Times Will Never Be The Same (Factory 25) — In the same way that so many directors have recently adopted a lazy, pseudo-documentary style to realize their no-budget DV narrative features, [Jody Lee] Lipes has reversed that concept and shot his actual documentary to look like a European art film. This is certain to shock viewers’ senses. For those who like their documentaries to adhere to familiar tenets of the form, this won’t be a welcome shock (many, in fact, will refuse to believe this footage isn’t 100% fabricated—I’ve already spoken to some of them). But for me, Lipes’ film feels like a reinvention of the wheel. I never doubted that this footage wasn’t at least in some way genuine; that it has been photographed with such care and precision makes it all the more stunning. The question viewers should actually be asking themselves is: why hasn’t anyone done this before? Read the rest of my review, then buy it on DVD

Bass Ackwards (New Video) — Don’t be fooled by the description. Linas Phillips’s narrative debut is as charming, inquisitive, and creative as his nonfiction work (Walking to Werner, Great Speeches From A Dying World). The kernel of the idea was a tiny VW bus—just wait until you see this thing in action—and a drive across country. But in Phillips’s hands, it becomes an inventive addition to the coming-of-age/road movie canon. What makes Phillips’s vision so special is that there is an innocent charm to his decision-making that feels superficially familiar yet is wholly unique. It’s as if he didn’t go to film school and never absorbed the lessons of “what not to do.” Bass Ackwards is a fine lesson in the power of creative intuition. It’s a special little treat. Visit the official website to learn more, then buy it on DVD

(full disclosure: Phillips asked me to moderate the DVD’s audio commentary with him, actor/co-writer Davie-Blue, and cinematographer Sean Porter).

Everlasting Moments (Criterion) — Everlasting Moments is like Hollywood gone right, a sweeping memoir picture that feels like it shouldn’t work (i.e., too familiar, too sentimental), yet it does. Director Jan Troell sets a lived-in, personal tone with just about every element, to the point where it feels like the film really is unfolding in present-day, turn-of-the-century Sweden. He also chooses not to overdue the creative awakening of mother and wife Maria (Maria Heiskanen). Maybe this was too subtle for the Academy? Gorgeously composed and tenderly wrought, Everlasting Moments deserves to find a nice little groove in the middle-ground marketplace. Buy it on DVD

The Eclipse (Magnolia) — Conor McPherson’s strange little picture might not always be successful, but it remains interesting throughout, thanks to solid performances by Ciaran Hinds and Iben Hjejle. Buy it on DVD

The White Ribbon (Sony Classics) — I personally felt like Michael Haneke was flicking me in the face with his latest film, but from the awards and reviews it’s received, it sounds like I’m in the minority. Either way, I would still say it’s worth checking out. Just don’t let everybody’s gushing raise your bar of expectation too inappropriately high. Buy it on DVD

A Walk Into The Sea (Arthouse Films) — Buy it on DVD

It Came From Kuchar (IndiePix) — Buy it on DVD

NEXT: A Primer On Urban Painting (Arthouse Films) — Buy it on DVD

Criterion Reissues Of The Week

The Leopard (Criterion) — Buy it on DVD

Night Train to Munich (Criterion) — Buy it on DVD

Television-On-Home-Video Pick Of The Week

Have Not Seen But Appear To Have Some Sort Of Appeal

The Crazies (Overture Films/Anchor Bay) — Buy it on DVD

When You’re Strange: A Film About The Doors (Eagle Rock Entertainment) — Buy it on DVD

Ricky Steamboat: The Life Story of The Dragon (Vivendi Entertainment) — Buy it on DVD

Avoid At All Costs

Once More With Feeling (MPI Home Video) — There are only two valid reasons to watch this movie, in which Chazz Palminteri stars as a husband and father drifting into a midlife crisis in which karaoke and his ‘mentor’ (Linda Fiorentino) are his mistresses: 1) If you are over 70 years old and are bored to near death levels; 2) If you want to teach a course in how to make an independent picture that doesn’t seem to have one drip of actual soul. Buy it on DVD