Fb. In. Tw. Be.
DVD RELEASES
On DVD
SLIDESHOW 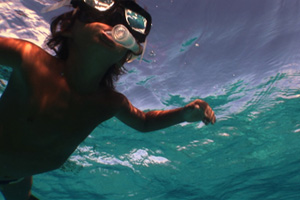 Alamar (Film Movement) — This breathtaking little gem of a movie—my very favorite of 2010, in fact—is executed with such seeming effortlessness, I was fully convinced I was watching a documentary the whole way through. While it might be lazy—and not entirely accurate—to call Alamar Malickian, Pedro Gonzalez-Rubio shows a similar reverence for nature that isn’t overly simplistic and hippified. It’s a touching story of a young boy and his father spending time in Mexico’s Banco Chinchorro coral reef, fishing and existing meal-to-meal, day-to-day, with their father/grandfather, before the child leaves his father behind once and for all to go live with his mother in Italy. This magical world is a pleasant reminder that industrialization hasn’t steamrolled its way into every corner of the world (not yet, at least). And when it’s time for the little one to leave that paradise behind, Gonzalez-Rubio doesn’t provide an obnoxiously loud contrast between the sea and the city. Back on land, in this more developed Italian setting, the beautiful memories of that quiet life linger. To paraphrase my smarter-than-I girlfriend, Alamar isn’t just a profoundly touching metaphor for parenthood in general; it’s like watching a father’s gorgeous dream in which he basks fully in the love of his child. Buy it on DVD

The Social Network (Sony Pictures) — If Alamar was my favorite movie of 2010, The Social Network seemed to be just about everybody else’s. David Fincher, Aaron Sorkin, Jesse Eisenberg, pretty much everyone brings their A-game to this sharp-witted, glossy, and actually profound modern retelling of an age-old tale. Chances are you’ve already seen this movie. Chances are you want to see it again. Buy the 2-Disc Collector’s Edition

The Freebie (Phase 4) — The main characters of The Freebie, Darren (Dax Shepard) and Annie (Katie Aselton), are in a stable seven-year relationship built on love, trust, and communication. While they have fun together and really love one other, they also opt out of sex for crossword puzzle races. After realizing how many months it’s been since they’ve made love, they come up with an idea: one night of freedom to sleep with whoever they want, no strings attached. They hope a “freebie” will be the cure they need… but whether or not they can go through with it is a different story. Like many other m-word movies, The Freebie is a true collaboration between those involved, but this is especially true when it comes to the director, DP and editor. Read Alexandra Roxo’s HTN CONVERSATION with the film’s main collaborators: Aselton (writer/director/star), Ben Kasulke (director of photography), and Nat Sanders (editor), then buy it on DVD

Louis C.K.: Hilarious (Comedy Central) — Louis C.K. is f**kin’ funny and this is more proof of that. Buy it on DVD

New To Blu-Ray Picks Of The Week

Army of Shadows (Criterion) — Buy it on Blu-ray

Have Not Seen But Wanna

Funny or Die Presents: Season One (HBO Home Video) — Buy it on DVD