(It Felt Like Love is now available on home video via Lorber Films: DVD

, iTunes. It world premiered in the NEXT Section at the 2013 Sundance Film Festival. Distributed by Variance Films, it opened theatrically on March 21, 2014. Visit the film’s official website to learn more.)

When you’re in high school, you either feel terrible or on the verge of a nervous breakdown. Either way, you try to betray as little as possible, your face giving off no hints, your world a one-way mirror seen with a manufactured, brittle indifference. Everyday has the potential to be the worst day of your life, and, often, it is. Eliza Hittman’s It Felt Like Love lives in this world; it is an unadorned, gut-wrenching depiction of what it’s like to be young and look around you, and have no idea where you are, who you are with, or how you got here.

Lila (Gina Piersanti) is 15 or 16, on the cusp of sexual exploration, with one foot still standing uncertainly in childhood. She spends her time as a voyeur, trying to experience things vicariously through her best friend Chiara (Giovanna Salimeni) as she titillates, pushes and pulls and pushes again, her boyfriend Patrick (Jesse Cordasco). Lila sits with a white mask of sunscreen, guessing what’s going on, what Patrick is whispering in Chiara’s ear, what it’s like to feel that close to someone. Walking home from the beach Chiara confides in Lila, “Patrick went down on me last week. It was good, but he needs practice.” Lila responds, “I hate it when they need practice,” making it too clear that she has no idea what they are talking about.

Lila dips back into childhood with her 13 year-old next-door neighbor Nate (Case Prime). Despite their age gap, it’s the boy who spurns her advances, politely turning her down suggesting checkers as an alternative, making the situation all the more pathetic. Her knees graze his arm as they lie on her bed in the sweltering New York heat. “It’s just not the kinda game you play with two people,” he says after she insists they play Truth or Dare. Later she brags to him “I met a guy at the beach… He went down on me.” “All right,” he replies with no clue what to say. “It was good, but he needs practice.” 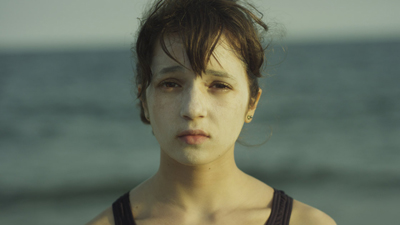 At the beach, an older guy, Sammy (Ronen Rubinstein) approaches Chiara and Lila is instantly smitten. Patrick and Chiara argue over Sammy, “You’re sure you never dated him.” “No he’s a douche, he’d fuck anything.” Yet, amongst the insults and argument, all Lila hears is opportunity. She goes to his work, trying to emulate as best she can what she believes an adult looks like: bringing groceries home (stolen from her own pantry), wearing sunglasses, smoking. Sammy sees right through it but this time Lila is not so easily deterred, she knows what she wants.

Chiara finally gives Patrick what he wants and before she can even get off of him, he’s suggesting they take a break. “I know I wanna be with you, but I can’t commit until we’re even,” Patrick says referencing their number of sexual partners. It’s shallow, crude, devoid of anything other than selfish braggadocio, in other words a typical teen male. The crash of the waves, a leitmotif in the film, is at its most heartbreaking as Chiara stumbles forward, hiking up her pink skirt, trying to wash up afterward.

She might not know why herself, but Lila is on a mission. After Chiara’s Sweet Sixteen, Lila convinces her to come to a party Sammy is throwing. The two parties contrast sharply. Chiara, accustomed to reigning over her peers, is overdressed and awkward amongst drunk, sweaty college kids. “I like the way that you sparkle, you look like a pink disco ball,” one of Sammy’s friends says to her, an insult wrapped in a pick-up line. Lila doesn’t know what to do here and it shows; at least Chiara’s boredom and dissatisfaction seems right at home. Lila cares too much, and it makes her an easy target. She is punished again and again for her naïveté, for her earnestness, for admitting she needs things.

It Felt Like Love is tactile, nearly tangible. Sean Porter’s sensuous, immediate cinematography brings you into Lila’s world, seeing her reflected in a bus window, slowly wafting through the weeds at dusk. Porter and Hittman hint at a sexuality undiscovered, on the precipice. Alongside the visuals, the music provided by the Pro Era hip-hop crew (including member Jordasco aka Nyck Caution) pulsates, turning parties sinister, but also somehow full of promise.

Bathing suits are a half size too big, hangovers glint off teenage faces, the pavement sizzles under their feet, shame goes right to the bone. You can smell the beach. Hittman and Lila’s world is one fraught with a pained yearning, one that only builds with each near miss. As Lila forges on, her sprint forward always a half stumble, it’s unclear if she’s better off, if she’s growing, or if she never should have even tried. This ambiguity is rare. Hittman offers no easy answers; in a sense, she offers no answers at all. But Lila is forced to confront these questions with her eyes open.