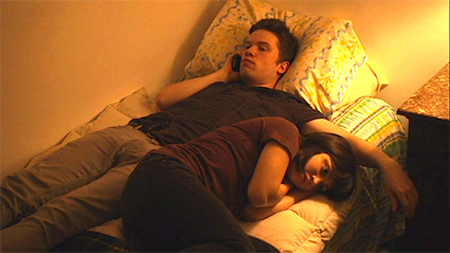 The Unspeakable Act (Cinema Guild) — In the alternate reality I wish our actual reality was living in, Tallie Medel would get a Best Actress Spirit Award nomination for her borderline miraculously convincing performance in Dan Sallitt’s latest film. From the description, you might be thinking that The Unspeakable Act is going to be a twisted Happiness-esque exploration of brother-and-sister incest. But Sallitt merely uses the premise of a sister who is in love with her brother to thoughtfully—and very, very uniquely, I might add—explore sibling dynamics and broader themes of growing up and letting go of one’s childhood worldview. Full confession: a second viewing was needed for me to fully appreciate what Sallitt pulled off with this film. Available on DVD

Radio Unnameable (Alive Mind) — If you’ve never heard the name Bob Fass before, this documentary will right that wrong in a jiffy. Fass is the legendary radio personality at Manhattan’s WBAI whose radio show has entertained and invigorated audiences for the past five decades. In the 1960s, Fass was more than a mere entertainer. His studio was a hub for some of the most influential American artists of that era (do the names Bob Dylan, Abbie Hoffman, and Yoko Ono ring a bell?), and his show was responsible for uniting listeners in a way that could never have been done otherwise. Paul Lovelace and Jessica Wolfson incorporate a staggering amount of archival footage into their film, which is equal parts vital history lesson and touching love letter to an unheralded American hero. [Full disclosure: I have an “additional camera” credit on this movie, but my participation was minimal to the point of nil—only one of my shots made it into the final cut—which is why I have no shame whatsoever recommending it here.] Available on DVD

Chasing Ice (New Video) — Anti-Global warmers should be forced to watch Jeff Orlowski’s disturbing documentary with their eyelids splayed open, A Clockwork Orange-style. The work that photographer and activist James Balog is doing with his time-lapse photography is both gorgeous and terrifying. Available on DVD

Ping Pong (Docurama) — This documentary portrait of several young-at-heart-but-old-in-body folks who share their life stories while gearing up for a ping pong competition is slight, but endearing. Available on DVD

Three Worlds (Film Movement) — French director Catherine Corsini’s drama is firmly rooted in the Babel-ian school of global storytelling, in which the lives of several characters from different economic and sociopolitical backgrounds intersect. Of course, the narrative conveniences make for a tough pill to swallow at times, yet the commitment of Corsini’s cast keeps things grounded. Available on DVD

We Steal Secrets: The Story of Wikileaks (Universal) — Available on DVD

Andre Gregory: Before And After Dinner (Cinema Guild) — Available on DVD

Wish You Were Here (Entertainment One) — Available on DVD