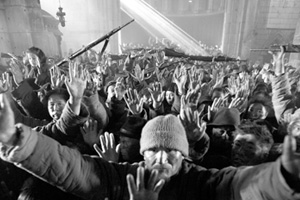 City of Life and Death (Kino) — In December 1937, China’s capital city Nanking fell to the invading Japanese Imperial Army. During the weeks that followed, the Japanese raped, tortured, and butchered its way through the city; the death toll varies widely, but some estimates put it at over 300,000. Lu Chuan’s epic film, which screens at Film Forum through May 24 and in select U.S. cities after that, dramatizes the Nanking Massacre from multiple perspectives. The major characters include a small band of soldiers struggling to resist the invaders; a German businessman (based on the real-life John Rabe) and his Chinese associates, who establish a safety zone to protect the citizens of the city; a Japanese sergeant whose fundamental decency is ultimately no match for his compatriots’ brutality. Read Nelson Kim’s full review. Available in a 2-Disc Special Edition on DVD

New/Old to DVD/Blu-ray This Week

The Conversation (Lionsgate) — Available on Blu-ray

Identification of a Woman (Criterion) — Available on DVD

The People vs. George Lucas (Lionsgate) — Available on DVD

A Serbian Film (Invincible Pictures) — I just don’t know if this is my cup of laced tea anymore. Maybe one day I will plug my nose and take the plunge. Available on DVD