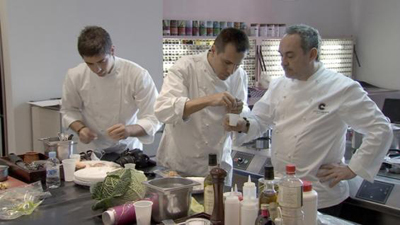 El Bulli: Cooking in Progress (Alive Mind) — Gereon Wetzel’s documentary grants viewers behind-the-scenes access into the world of chef Ferren Adriá and his team of collaborators, whose notorious Spanish restaurant is almost laughably creative. Here, simple meals will not do. In the six months leading up to the restaurant’s opening, the staff holes up in Barcelona to prepare their summer menu. While these scenes are amusing—they border on self-parody but never cross all the way over—when it comes time for the restaurant to open its doors, the film starts to play like a high stakes thriller. Even if you aren’t kitchen- or cooking-minded, the wild mind and dedication of Adriá will win you over. Available on DVD

A Dangerous Method (Sony) — David Cronenberg journeys into the past for this story about the birth of psychoanalysis, as expressed in the budding relationship—and subsequent rivalry—between Carl Jung (Michael Fassbender) and Sigmund Freud (Viggo Mortensen). Jung’s measured, analytic state-of-mind is upended by the appearance of Sabina Spielrein (Keira Knightley), who lights a fire in his loins that he can’t seem to put out. Available on DVD

Romantics Anonymous (New Video) — Slight in the best sense of the term—at 78 minutes, it’s literally slight—Jean-Pierre Améris’ sweet love story won’t win points for originality, but the chocolate looks damn tasty, and the chemistry between the leads (Isabelle Carré and Benoît Poelvoorde) makes you want to see this through to its happy ending. Available on DVD

A Night to Remember (Criterion) — Available on DVD

The Broken Tower (Entertainment One) — Available on DVD