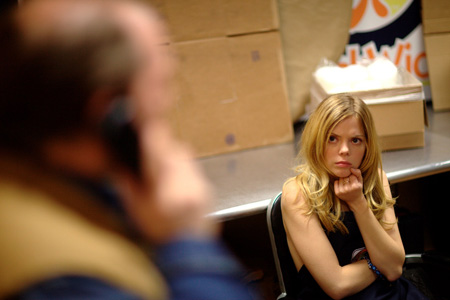 Compliance (Magnolia) —  Compliance is essentially a docudrama, but it moves with such analytical drive that it more closely resembles a police procedural. In this case, however, rather than watching how a crime is solved, we are watching a crime being committed as well as, through Craig Zobel’s crafty writing and direction, an analysis of how that crime came to be and why it was committed. It’s a deceptively simple film, and both the lazy and the prickly, easily offended viewer will seek ways to escape the experience, either through accusations of misogyny or simply through the false interpretation that it has no other objective except to titillate and exploit. But the fact remains: this film should be required viewing. (Mike S. Ryan) Read The Full HTN Review. Available on DVD

The Wise Kids (Wolfe Video) — Stephen Cone’s debut is a rare bird in American indie cinema: a micro-budget feature without a trace of irony or cynicism. Centered mostly around a group of evangelical teenagers at the end of their high school days, The Wise Kids sparkles with the hopes and fears of adolescence. There isn’t a false note in it. Cone treats his characters with an honest, tender touch, never once judging them for their beliefs. A film about acceptance, about doubt and questioning as a part of the human experience. Everyone listen up and take this lesson to heart: Love your characters, love your characters, love your characters… (Zach Clark) Available on DVD

Found Memories (Film Movement) — This is a small, patient movie—a short story as opposed to a novel—about a young photographer who arrives in an seemingly forgotten Brazilian town and finds shelter in the home of a stern older woman. As she adjusts to the quiet rhythms in this environment that has not been touched by industry or technology, a tender friendship blossoms, leading to a wisp of a punchline that ties everything together. Available on DVD

Whores’ Glory (Kino Lorber) — A film that obliterates the wall between fiction and nonfiction with ease. Celebrated Austrian auteur Michael Glawogger is concerned with how global, abstracted systems (work, living conditions, and in this case, the world’s “oldest profession”) affect and are affected by actual human beings. He’s an aesthete and a stylist, but he gives as much attention to the rhythms of real conversation as he does the mise en scène. This is a film about sex as a commodity, sex as a source of power/oppression, and how bodies and cultures interact. (Robert Greene) Available on DVD

The Spirit of the Beehive (Criterion) — Available on DVD

, and at Amazon Instant.