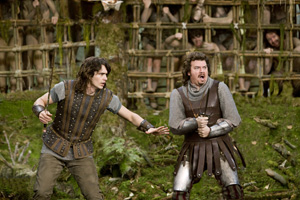 Your Highness (Universal) — Read my semi-review of this subversive romp, which includes links to a somewhat extensive set report I embarked on during the film’s production. Then buy the Unrated version in the following formats: DVD

Cameraman: The Life & Work of Jack Cardiff (Strand Releasing) — While this movie might not qualify as “great cinema,” merely listening to the great cinematographer Jack Cardiff reflect upon his storied career working in England and Hollywood makes this a must-see for anyone with an appreciation for cinema. It’s no wonder so many people wanted to work with Cardiff. Not only was he a charming, affable man, he was a brilliant creative technician who brought anything he touched to much fuller life. Buy it on DVD

New/Old to Blu-ray Pick(s) of the Week

The Battle of Algiers (Criterion) — Buy it on Blu-ray

Dazed and Confused (Universal) — Buy it on Blu-ray

Fast Times At Ridgemont High (Universal) — Buy it on Blu-ray

Taqwacore: The Birth of Punk Islam (Lorber Films) — Buy it on DVD

The Last Godfather (Roadside Attractions) — Buy it on DVD