(Rick Alverson caused waves in 2012 when his Sundance premiering hit The Comedy hit mass audiences. His follow-up is Entertainment which, while not as surface level upsetting as his previous film, nonetheless has a lingering darkness to it that gives one pause. Jesse Klein digs into the existential realism of Entertainment and you can do the same when the film hits theaters, on-demand and iTunes November 13 via Magnolia.)

In July of this year, our own Mike Ryan wrote an article for Filmmaker Magazine called “TV is Not the New Film.” In it he put forth a convincing argument about the continued relevance and sui generis quality that narrative cinema offers despite TV’s recent dominance as the supposed preeminent audio-visual platform in its so-called second Golden Age. No one can refute the onslaught of excellent long form narrative TV, generally thought to have started with The Sopranos in 1999 and The Wire in 2002 and up through the present moment with the conclusion of Mad Men, and the continued success of shows like Transparent and The Leftovers, among a dozen or so others.

However, long form TV’s structure by its very essence requires a certain homogeneity; without giving the audience some bait to bite and bite again, what would keep them coming back? Film as one-off experience —aside from the sequels and prequels and reboots and spinoffs and and and— empowers a director to express her or himself freely, to not be shackled by financial incentives that require built-in repeated visits. Without the need to spoon-feed, to please, a director can say what it is they mean, and the audience can choose to engage in conversation or not. In that article, Ryan cites Rick Alverson’s new film Entertainment as a work that requires active viewing: “Meaning or “truth” is not coded or hidden in metaphor; meaning in his films is found through the audience pushing against the events depicted on the screen.”

These events demand active viewing because they challenge our ideas about what we expect from a movie, or from the experience of watching one. Entertainment follows comedian Neil Hamburger (Gregg Turkington) as The Comedian, a fictionalized version of himself, as he travels through the desert to LA with his comedy routine. This is hardly the story, if there is one at all. There is no inciting incident, no plot points, no climax, though all of those conventional structural elements are there, if you choose to see them that way. Entertainment is a nightmarish choose your own adventure story where the only thing more horrifying than a never-ending solitude is everything else.

Rick Alverson borrowed from Neil Hamburger’s real-life comedy material and for much of the film we are stuck, like his onscreen audience, listening to his act that grates, that offends, that tests the boundaries of what an audience can handle —of, in essence, what can be termed entertainment. When an audience member heckles The Comedian revolts, humiliating them but more so underlining his own grotesque carnival. It’s all part of the show. The film operates much like his performances do, incrementally becoming more difficult, forcing the audience to create meaning where —perhaps— there is none. We are staring into an abyss; it is up to us to decide what lies in its the depths. Alverson dares us to jump without telling us what’s at the bottom, or if a bottom even exists. 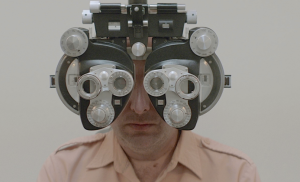 There are events that punctuate, though offer no reprieve from, the depravity of the performances. In this desert The Comedian is an entertainer, a hideous clown much like his opening act Eddie (Tye Sheridan), but he is also a tourist, forever a stranger. The film opens with his touring an airplane graveyard, wandering in and out of gutted jumbo jets. The Comedian visits the vestiges of an American supremacy now decaying in full bloom: oilrigs, a fake Western town, and finally a shooting range replete with children wielding shotguns gleefully yelling “pull!” Seeing this last sight, all he can do is turn away.

With his previous film The Comedy, Alverson explored and commented upon a perpetual male adolescence. Men with guts and trust funds played sloppy drunken baseball on shiny Williamsburg mornings. The film was steeped in irony; Tim Heidecker’s Swanson’s quest for meaning only rendered him more jaded, further from the world. In The Comedy, the tragedy of white middle-class American maleness was that no one grows up, cuz, like, why?

In Entertainment, The Comedian is not afforded the luxury of an ironic pose; the existential terror of everyday life proves too real. Now, Alverson’s protagonist is firmly planted in middle age with career and child. Though fledgling, his career is solid; he goads, prods and torments his meager audience for a spell then receives his nominal check, maybe accommodations if he’s lucky. In these desolate motels, he calls his daughter Maria, or rather compulsively calls her voicemail. If we are to find any change or arc in The Comedian it’s in his unraveling, in his act, and in the desperation that leaks out in these monologues to a person who cannot hear him. His “sweetheart” never answers and it’s unclear what their relationship is like, if there is one at all. 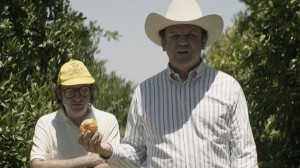 The Comedian suffers in his solitude yet reaches new lows time and again when he engages others. His cousin John (John C. Reilly) cluelessly twists the knife with his unending inanities, supposed business savvy and blatant xenophobia. The only pseudo-romantic interaction for The Comedian is with The Chromotherapist (Lotte Verbeek), someone seemingly as disaffected and disenfranchised as he is. The closest thing they share occurs when rays of sunlight come in, too strong, too hot, through a motel window.

Entertainment forces you to recoil. You can’t help but be revolted by the images, in their sheer lack of love or compassion, in their stalwart banality, in their beautiful emptiness. Alverson pushes you away but this only draws you back, to ask why, to ask how, to seek for and create alternate meanings. This is what Mike Ryan said of Entertainment and of film’s unique ability to create a dialog with the viewer, something that television, essential as it may be, still cannot do. Alverson does not present events that are coded in subtext or metaphor, he presents things that are and invites us to engage with him and to together give them context, meaning, life.

When The Comedian sleeps in those foreign motel beds and on strangers’ couches, he dreams of himself, clad in white cowboy suit standing in mysterious locations looking forlorn at the camera, accusingly at himself, helplessly at us. The Comedian wears a mask that evades meaning; it says nothing, and, so, everything. Alverson drives The Comedian to oblivion and beyond, his identity finally washed away when stripped of his costume and sense of purpose as an entertainer. He sits, as we do, glued to a screen that shows only his own distorted reflection. All he can do is laugh in horror.